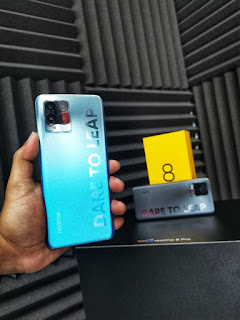 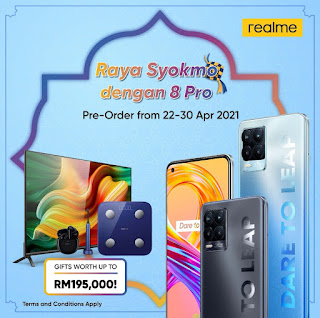 Fans who pre-order the device during ‘Raya Syokmo dengan 8 Pro’ campaign from 22 to 30 April and collect realme 8 Pro on 1 May, they will be entitled for a pre-order gift box and additional 1 year warranty.
Malaysians also will stand a chance to take home realme AIoT devices in conjunction with the Hari Raya Aidilfitri celebration. There will be a total of 352 gifts ranging from realme Smart TV 43",  realme Buds Air Pro, realme M1 Sonic Electric Toothbrush and realme Smart Scale for realme 8 Pro users to win. 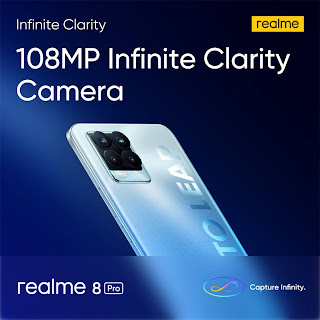 “As a Dare to Leap brand, we are proud to introduce our first realme smartphone equipped with the superb 108MP Ultra Quad Infinite Clarity Camera adopting the highest pixel available in the industry. By having realme 8 Pro in hand, it is certainly able to satisfy our Malaysian youngsters who are looking for smartphones with both trendsetting design and powerful camera features. Again, it's 108MP and you will surely indulge in the spectacular views captured with its camera lenses,” said Tiffany Teh, Brand Manager of realme Malaysia....
108MP Ultra Quad Camera
realme 8 Pro is the first realme smartphone equipped with a 108MP camera, adopting the third generation ISOCELL HM2 Sensor with 108MP ultra high pixel. It comes with an extra large sensor of 1/1.53 inch that reaches the maximum resolution of 12000x9000.
realme also developed a new ultra-high definition algorithm for the unparalleled clarity in every 108MP shot with the newly upgraded and super-high resolution HM2 sensor.
The Ultra-clear 108MP Mode enables you to take infinite clarity pictures in vivid colours simply by turning on the AI scene recognition function.
The Smart-ISO technology is your best lighting assistance as it automatically chooses the best ISO setup according to the environment, ensuring the photos captured are clear, bright, hierarchical and colourful.
Additionally, HM2 sensor supports the technology of 9-in-1 Pixel Binning which improves the image quality under the dim light.
The Super Nightscape Mode of realme has been updated to the fifth generation where the new functions include the algorithm of Pure Raw Nightscape with AI image noise reduction and automatic dead pixel removal. It enhances the nightscape picture to look bright and pure. 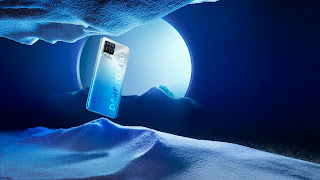 As for the new 3X In-Sensor Zoom technology in realme 8 Pro, it is able to enhance zoomed images with the Clarity Enhancement Algorithm. The technology has smaller imaging size and faster imaging speed. It combines eight 12-megapixel photos that are quickly shot each time and output to further improve the sharpness as well as clarity. 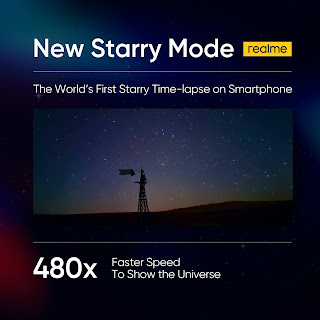 realme also presented the new Starry Mode which is an upgraded second generation that optimizes the imaging process. The starry brightening step is separated from the algorithm and processed by the ISP in SoC which are promoted as sure-fire brightening effects and noise reduction.
realme has exclusively developed World’s First Starry Time-lapse Video Algorithm that allows you to take 16 individual photos every 15s for 4 mins and combine into a final picture. For Starry Time-lapse Video, you can take photos at the same 15 seconds interval but only the last 15 photos are retained to save more storage while composing a starry picture and merging them into a 30fps time-lapse video. For instance, you can take 240 starry photos in an hour that end up with an 8s starry time-lapse video. 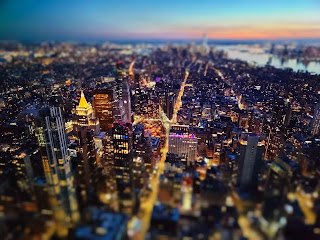 The Tilt-shift Mode of realme 8 Pro can transform the real world into a magical miniature world with its blurry effect that makes part of the photo clear and blurred. You can also manually adjust the shape, angle, position and size of the blur effect or customize its blurry effects to match with the scenes. realme 8 Pro features the World’s First Tilt-shift Time-lapse Video Mode that supports time-lapse videos with 10x playback, presenting the real world in a more fantastic and unique way. 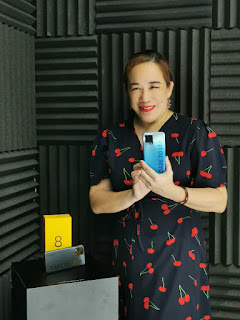 Next, realme 8 Pro offers trendy portraits where Neon Portrait enhances the blur effect on backlights to create a more “dreamy” shot; Dynamic Bokeh creates an eye-catching sense of motion for your street shots; AI Colour Portrait showcases a unique protagonist as the main character is in colour with black and white background. The New AI Portrait automatically detects portraits in various scenarios, resulting in the natural-looking and vivid portrait shots. realme 8 Pro’s 16MP Selfie Portrait brings your selfies to the next level with its AI Beauty, Portrait Mode and Super Nightscape.
YouTubers and Tiktokers can now record creative and interesting clips with both front and rear cameras at the same time by using the all-new Dual-view Video. The AI enhancement algorithm on Ultra Nightscape Video has been upgraded with smart lighting detection that increases shot brightness and clarity, enabling you to take dreamy night videos at ease. 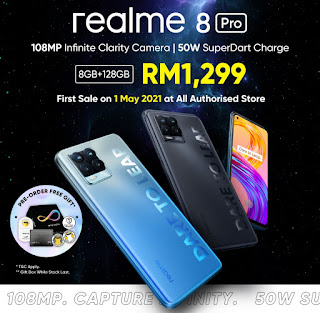 4500mAh Massive Battery with 50W SuperDart Charge
realme 8 Pro has a 4500mAh massive battery that is sufficient for all day usage as it is coupled with the low-power consumption processor and Super AMOLED Display. It can last for 33 hours of phone calls, 82 hours Spotify music play, 8 hours of gaming, 22 hours of texting or 20 hours of video play. realme 8 Pro can be fully charged in 47 minutes or 50% charged in 17 minutes with 50W SuperDart Charge, a 65W standard adapter comes along in the box for other fast charging usage on a wider range of devices.
The powerful and silent assists from All Scenes Battery Optimization have prepared the responses for background task management, late night standby and low-battery scenarios. When Super Power Saving Mode is turned on, realme 8 Pro can standby for 32 hours even at 5% battery level. Other battery optimizations include Sleep Standby Optimization, App Quick Freeze and Night Charge Guardian. 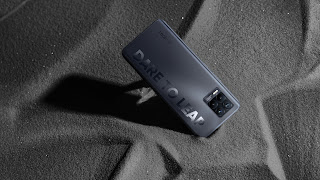 6.4 Inch Super AMOLED Fullscreen
realme 8 Pro comes with a 6.4 Inch Super AMOLED Fullscreen that has better color reproduction, higher contrast and a more realistic display as compared to LCD screens. The screen achieves Full HD resolution up to 180Hz touch sampling rate for quicker responsiveness when gaming. It also features Always-on Display where you can glance through important information at once. The fast-unlocking light-sensitive In-display Fingerprint Sensor offers a more interactive and efficient experience.
realme 8 Pro is available in two colour options which are Infinite Blue and Infinite Black, Infinite Blue is dreamlike and dazzling while Infinite Black is mysterious and low-key. Both colours adopted the trendsetter big Slogan design boldly that shows the unique comprehensive of trendsetting design and the brand spirit of Dare to Leap.
The back cover of realme 8 Pro applied the AG-Crystal Process technology which captures countless consumers with smooth hand feeling and high-grade quality. It creates a natural mineral crystal, glossy and matt, rough and delicate, exquisite and smooth texture for the back cover. Users will see the starry sky composed of dense small granules, which is dreamlike and futuristic at a close look.
The device is super slim and light with a weight of 176g and thickness of 8.1mm, it is comfortable to hold in hand as compared with most smartphones that weight over 200g nowadays. realme 8 Pro is also the first phone to equip with the newly upgraded realme UI 2.0 in providing faster, smoother, safer and personalized experience. 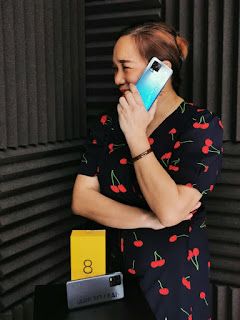 Really hoping to get myself one of this babies....