U Mobile, the telco with the fastest mobile network in Malaysia, today unveiled a brand new rewards campaign called TERER THURSDAY which offers both its Prepaid and Postpaid customers free deals every Thursday starting from today. For the first TERER THURSDAY, customers will get to enjoy a free Chatime drink worth up to RM6.50. The TERER THURSDAY treats which are worth up to RM5 Million in total may be obtained via the ‘MyUMobile’ app.


U Mobile is constantly thinking of innovative ways to reward their customers since their customer base has really grown tremendously and for the support. 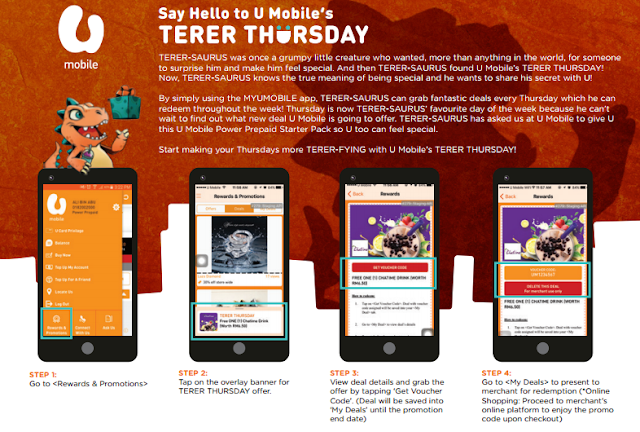 Thus U Mobile decided on TERER THURSDAY as  they wanted their customers to have a head start for the weekend by enjoying free treats compliments of U Mobile. To ensure that the treats would be of appeal to their customers, U Mobile is investing RM5 Million in the TERER THURSDAY Campaign to ensure that there will be a wide range of treats to be enjoyed!

To mark the festive season, U Mobile also has a special Christmas Reward Campaign where customers will be able to enjoy 12 days of consecutive treats leading up to the festive holiday.