Malaysian singer-songwriter Shila Amzah, amazes me. I have never seen another person who can sing in so many languages fluently, she has sang Malay songs, English songs, Chinese songs, Korean songs, Japanese songs, Hindi songs and the list will go on I am sure and her voice is just so melodious... 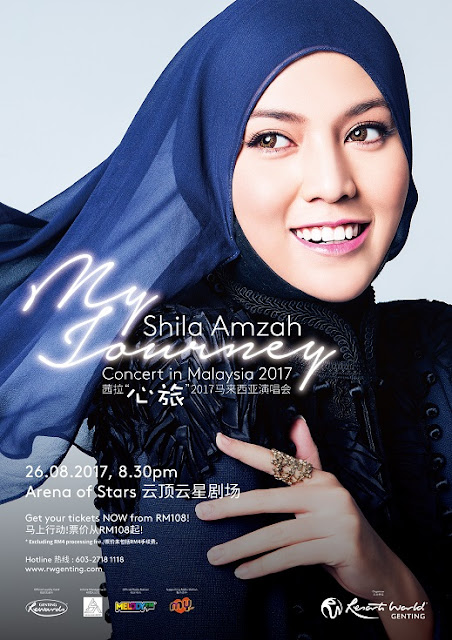 It is surely no surprise that she is dubbed “Asia's Sweetheart,” and well, if you are a fan like I am, you will be pleased to know that she will soon light up the stage at Resorts World Genting with her unique brand of music that has won her international fame across Asia.

Shila Amzah “My Journey” Concert in Malaysia 2017, will be held at the Arena of Stars on 26 August 2017, 8.30pm. This concert will showcase her versatility and will include hits that have won her critical acclaim even in highly competitive markets like Hong Kong and Taiwan.

The concert’s main concept is “My Journey”, which happens to be the title of her latest album. It is a fitting concept that highlights the milestones she has chalked up thus far in the world of music, from the time she first began to sing professionally till now when her rising popularity will see her staging her second concert in Malaysia.

Little wonder Shila was made Malaysia's Tourism Ambassador last year, her contributions towards promoting the country through music deservedly earning official recognition. She was also honoured at the 20th Malaysian Music Awards, receiving the Kembara Award (International Music Breakthrough Award), an award given to Malaysian artists that have performed internationally and have helped promote Malaysian songs to the world. Shila became the youngest honoree of the award—she is only 26 years old—after having become the champion of Asian Wave (2012), a reality Chinese singing competition held in Shanghai.

I gone slightly overboard with sharing some of her youtube videos hahah but those really mesmerized me..

Shila is not just a singer-songwriter, but also a record producer, actress and businesswoman all rolled into one. The young singer gained recognition very early in her career—her first real success began with her single, Patah Seribu,  receiving Pop Song of the Year at the 19th Malaysian Music Awards. The single is from her second pop studio album, Sha-Hila.

After that in 2015, Shila, whose real name is NurShahila binti Amir Amzah, brilliantly charted her journey into the Chinese music market—stamping her mark in the Mandopop industry in Hong Kong by releasing some new singles. Her latest album, My Journey, released last year, confirms her continued popularity. Shila also successfully established her second record label and a global management company called Shilala (HK) Limited. Not surprisingly, along with being dubbed “Asia's Sweetheart,” other honorific titles came her way, including “Princess of Music” and “National Treasure of Malaysia.”

Tickets to Shila Amzah “My Journey” Live in Malaysia 2017 are priced at RM318 (VIP), RM248 (PS1), RM188 (PS2), RM138 (PS3) and RM108 (PS4). Genting Rewards Card (GRC) members are entitled to a 10% discount when they purchase tickets by cash or credit card, and Genting Points redemption. This is applicable for all price scales. Admission is one ticket per person applicable to adults, children of all ages and infants.