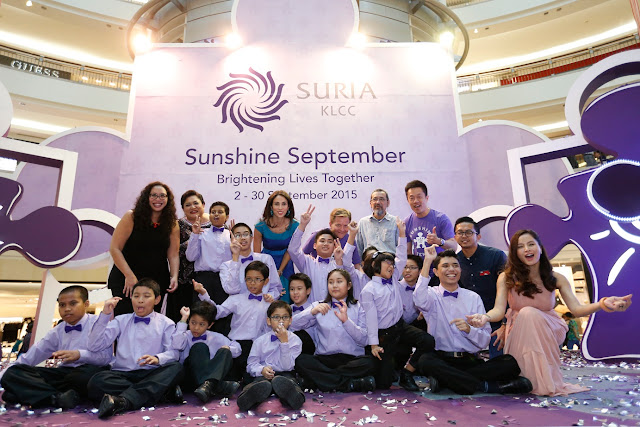 People who are autistic are very often misunderstood, And with that  they suffer discrimination, intolerance and isolation, resulting in  everyday society exclusion. However, not many people know that most people with autism do actually have special abilities such as in mathematics or arts...

Suria KLCC launched their Sunshine September 2015 programme at the Suria KLCC mall today, to increase awareness of autism among Malaysians as well as to raise funds for The National Autism Society of Malaysia (NASOM). Sunshine September 2015 , for the 6th time, aimed to showcase the NASOM children’s various talents and seek contributions through various fundraising activities, besides helping Malaysians understand more about autism.

NASOM Maestro, the first autistic choir in Malaysia and Umar Hasfizal, an autistic youth with a beautiful singing voice, gave an amazing performances which demonstrates that with proper support and early intervention programmes, individuals with autism can have meaningful and fulfilling lives. NASOM choir gave their all and performed ‘We Are the World’, while Umar Hasfizal belted out one of his favourite numbers, ‘You Raise Me Up’. 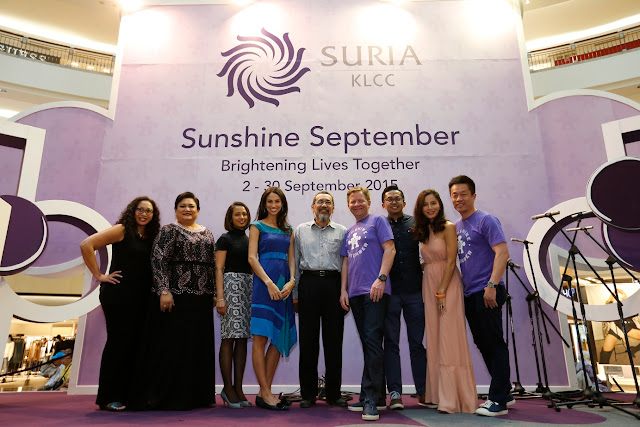 Andrew Brien, Chief Executive Officer/Executive Director of Suria KLCC Group said, “What’s different this year is that Suria KLCC Group is working together with Lite FM radio station not only to raise awareness of autism but also to showcase a video of Umar Hasfizal’s rendition of “You Raise Me Up” song.   This video is available on Lite FM Facebookpage here until 30 September and we are seeking the public’s support through the number of Likes for the video. For every single Like received, Suria KLCC Group will donate RM1 to NASOM through the Sunshine September programme.  There has already been more then 70,000 likes so far!!!  So help NASOM and more people living with autism by clicking Like for Umar’s video.”

He further added,  “Sunshine September was initiated to help Malaysians living with autism to seek assistance and for others to understand autism and accept individuals with autism.  Knowing how much NASOM relies on individual and corporate donations, we have raised more than RM1.4 million for NASOM over the last six years with the support from our retail partners, visitors and shoppers. Proceeds donated to NASOM in the past have been used for their educational programmes which include mainstream school programme, early intervention programme and early intensive intervention programme. This year, again with everyone’s support and help, we hope to raise more awareness and funds for NASOM to assist more people affected by autism.”

The Sunshine September programme at Suria KLCC, Alamanda and Mesra Mall will see exciting game activities and sales of merchandise such as T-shirts, stationery sets, cutlery sets as well as arts and crafts by NASOM children, among others throughout the malls starting from 2 September until 30 September. In addition, the retail partners of all three malls will also be contributing to the Sunshine September fund either through cash donation or part of the sales proceeds from selected merchandise.

Members of the public are also invited to visit the NASOM booth at all three centres centre court from 2 until 5 September to acquire more information about autism and NASOM.  NASOM MAESTRO, the first autistic choir in Malaysia will also be performing at all three malls to showcase their dancing and singing talents.    Apart from arts & crafts, paintings made by the children will also be sold and 100% from the sales collection goes to NASOM.

For more information about Sunshine September programme, please visit www.sunshineseptember.com or contact (03) 2382-2828 for Suria KLCC, (03) 8885 5468 for Alamanda and (09) 864 9000 for Mesra Mall. For parents or anyone who knows people living with autism and would like to know more about NASOM, visit www.nasom.org.my