Instant noodles/maggi mee does not cause cancer 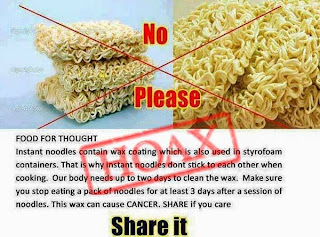 I love my maggi curry noodles. I also love Wing's "fried" noodles with sambal and the Korean Ramen. Instant noodles has somewhat became necessity. Most regular lower income/ lower medium income homes have a few packs around the house for times when you are hungry.. The times you have a very limited budget etc.

According to the above picture, which has been circulating around a lot, instant noodles supposedly contains a wax coating to stop them from sticking together.

There are also claims that the polystyrene foam containers the noodles come in also have a coating of wax.

The message warns readers that this wax can build up in our bodies and cause cancer.

It advises consumers to wait at least three days between eating noodles because our bodies need about two days to clean out the wax.

However, the claims in the message are utter nonsense. Neither noodles nor polystyrene foam food containers are coated with wax.

This is not true.  The wax on both the containers and the noodles would quickly melt away when boiling water was added and would therefore be utterly pointless.

An article on noodle myths on the Monde Nissin website says:

Noodle strands do not stick together as a natural process of slitting or cutting the noodle dough into strands, steaming, and then frying in normal cooking oil.

The polystyrene foam does a great job of retaining heat and holding foods and liquids, and definitely does not need a wax coating.

And, if the noodles and the containers did have a wax coating, there is no credible evidence to support the claim that consuming this wax could lead to cancer.

As a matter of fact, various types of waxes are used regularly in various foods such as confectionary and as a coating for products such as cheese. While eating a large amount of some types of wax may lead to intestinal obstruction, wax is non-toxic when consumed in small amounts and there is no proof that it has carcinogenic properties.

Wax does not build up in your body as claimed in the "warning". Wax cannot be digested but simply passes through the body unchanged.