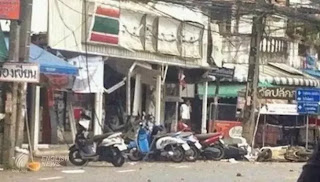 The bombs separately went off at around 1.30pm in front of the 7 Eleven convenient store on Ponpichai Road and near the police flats opposite Hat Yai police station. The blast there at the police flats damaged many vehicles as the bomb was placed near the police station's parking area.
Fire fighters rushed to the scene to control the flames caused by the explosions. Later reports said two more bomb blasts hit an area near Hat Yai railway station as well as close to the Robinson department store. 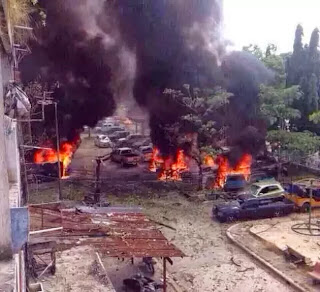 Hat Yai, the largest city in the South of  Thailand, very popular with Malaysian and Singaporean tourists, was targeted back in 2012 by a car bomb at a city hotel which that killed three people, wounded hundreds and left parts of the city looking like a war zone.

Another bomb was supposedly found near some flats in Prince of Songkhla Hospital but the bomb squad was able to defuse it.