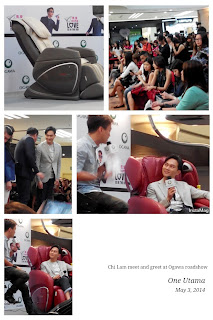 My daughter saw a bunting of Julian Cheung or better known to his fans as Chi Lam aka Captain Cool, at the Ogawa outlet at Giant Batu Caves a couple of weeks before.
So she wanted to meet him. He was after all a good looking actor and singer.. And now brand ambassador for Ogawa among other things.
She saw him when her mother, ah, yes, that would be me, was busy watching Hong Kong TVB series the Triumph of the Skies 2, and oogling over the good looking casts over Astro on Demand.
So she pleaded with me to bring her to see him "live".
We queued half an hour before with other excited teenagers etc and when the man appeared, she was frowning at the older girls as they were excitedly squealing and shrieking "Chi Lam" ,"Chi Lam" upon seeing him.
Later, she complained to me about those older girls being so dramatic.
Ahhhh.. My little girl!!!
Anyway, up close, Julian Cheung really look good, for his age-41. He really does not look a day over 35 !!!
For more info on Julian Cheung, check out: http://www.google.com.my/url?sa=t&source=web&cd=1&ved=0CCUQFjAA&url=http%3A%2F%2Fen.m.wikipedia.org%2Fwiki%2FJulian_Cheung&rct=j&q=julian%20cheung%20chi%20lam&ei=_uloU6mEEo6MrAevrIHYDw&usg=AFQjCNF6aF8e7muY36YxdWLTeUUu2E9ZgA&sig2=jXB1vmAteCQEgY4Ul_yVFw&bvm=bv.66111022,d.bmk