Yippee, I am a millionaire!!!!

I just opened my email and oh gosh. There it was , this tempting email saying I've won USD1.35 million. The thoughts that rushed through me.. I can buy a luxury condo now.. And buy a round the world tour for 6 months, put some money in trust for my children...

Yeah right, I snorted. This is a bloody scam and not the first one I got. In the first place, I don't remember entering any contest in connection with Yahoo or Shell, so how the hell do they know who I am.... Secondly, Shell has warned of these scams long ago.

These scams consists of someone convincing you that a lot of money or an expensive prize is within your reach. At the last minute, however, you will be asked to advance some money to clear one last hurdle. After that, neither the scammers nor your money are seen again.

So don't ever reply to that scam!!!! As painful as it is, just ignore it. Trash that email. Or not only will you NOT see any dollar of that so called prize but end up losing more then you bargain.

There are hundreds of  versions of this scam using many different names for the originator so if you may not see here the particular message that you may have received. The bottom line is the nature of the offer made

United States Secret Service mentioned that it is a scheme that has predate the Internet. It is known as "The Nigeria Advance Fee Scam" or the "Four-One-Nine", referring to the Nigerian law for fraud. The majority of the messages in the beginning were coming from people in Africa, especially Nigeria, but now the emails seem to be coming from every part of the globe. London, Paris, New York etc..etc...

Here are several different scenarios presented in the messages with the most common one telling you that there are millions of dollars sitting idle from a business deal, a government action, or an inheritance, and all you need to do is agree to let the money be run through your bank account or to help invest it in the U.S., and you'll get a commission, usually in the hundreds of thousands or millions of dollars.

Other emails claim to have unclaimed cash from the terrorist attack on the World Trade Center in 2001 or inheritance money from a victim of the Pentagon attack on the same day.

There is a version that claims to be from the former accountant of a son of Saddam Hussein as well.

Watch out for emails like this very one, which say you've won contests or lotteries that you never entered, have funds for you from a transaction that you never arranged, that you have won a prize but you need to pay for the shipping, or who say they need your credit card or other financial information in order to complete the transaction.

There are hundreds of other variations on those themes and, according to the U.S. Secret Service and other authorities, thousands of people who have lost hundreds of millions of dollars.

The authorities receives an average of 100 phone calls and 300 to 500 pieces of correspondence per day about the advance fee scams and says that in 2001, there were reports from 3000 people who said they'd been scammed.

Quite a number of them lost more than $300,000. Many people who've lost money don't report out of shame.

1. You receive a request from someone with the prospect of millions of dollars coming your way.

2. You reply and through a series of exchanges via email, fax, and phone, you are presented with documentation and very convincing proofs of the identities and the credentials of the people you are dealing with.

3. You will be asked to provide information about yourself or your company including letterhead and other identification.

4. You may be asked to come see them in person in their country, or they may ask to come see you.

5. Very often, some strings will be pulled on your behalf such illegally getting you into the country that is your destination.

6. Once you are feeling good about the transaction and can taste the millions of dollars in your bank account, there is a sudden complication.

You are told that the money is secure and ready to be transferred, but that in order to get it released, a government official needs to be bribed or a fee needs to be paid.

You are given a last-minute request to advance thousands or hundreds of thousands of dollars to get rid of the unexpected glitch.

Or, in the worst cases, you may actually be trapped in a foreign country and will have to pay your way out.

The amount of money the scammers ask for is based on how much they've learned about your assets.

7. Then, bye-bye. You never see your money or those scammers again.

Something to take note is the scams will admit that the money is stolen or the result of criminal activity such as overcharging companies who did business with the country.

That means that anyone who wants to get involved in the scheme has already agreed to participate in something that is "under the table".

That cuts down on the number of them who complain to authorities after it's all over. There are many wealthy individuals who would rather endure the loss of the money than to admit that they got scammed while participating in something slippery.

Examples of some of the advance fee scam messages:-

Many of the emails will claim to be from the son, daughter, sibling, or wife of a former leader of an African country who was either kicked out of office or killed by his enemies. The family members have either been able to rescue the family fortune or have been able to put the funds into something like a European bank account or a safe deposit box.

Some of them claim to be from the widow of a leader who escaped his enemies, but then died of cancer in another country.

Others claim the government official died in the Word Trade Center on September 11, 2002 in New York.

*The bankers who wants to make you rich

These emails are supposedly from a bank official in an African country.

He says he's aware of millions of dollars languishing in an old account left behind by a foreigner, typically an American or European, who died without heirs, usually in a plane crash.

The bank official can arrange for you to be named as the next-of-kin and inherit the money.

*Government officials who are in a position to transfer funds

..Petroleum officials-A man who is in charge of petroleum for a country has padded his construction budget. He wants to make it appear as though you are a contractor receiving money.

...Various other government officials-Either propose a scam that makes you look like you are receiving legitimate payments from the government or are simply stealing money that they want to run through your account. They include utility officials.

...Officials in charge of clean-up of an oil spill-They admit overestimating the cost of cleaning the oil spill so they've got funds to invoice a phony company if you want to be it.

*The son or daughter of a wealthy businessman needs your help

...Children of some gold or cocoa merchant says their father was secretly hiding a large sum of money. The father's enemies poisoned him to get the money and now the son or daughter is afraid of being killed. He or she knows where millions of dollars are hidden. He or she wants you to run the money through your bank for them.

*A banker or lawyer says he has millions of dollars of an inheritance that needs to be claimed and that he can arrange to have you named as the heir, transfer the money, and let you keep part of it for your trouble.

*Phony lotteries and other winnings

...South Africa-You're the winner of the country's annual lottery.

...Notification of winnings of lotteries in the Netherlands 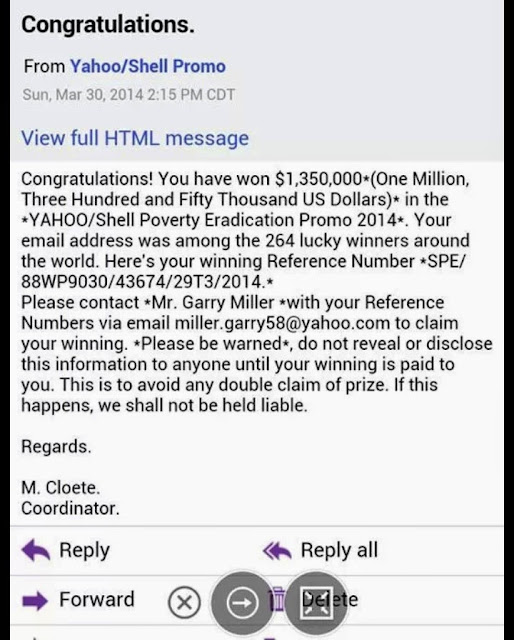