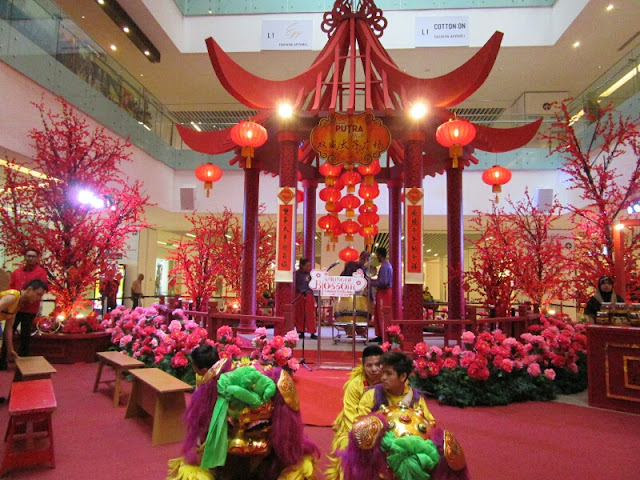 Despite being unwell, and the streak of stubbornness that runs through me, I still manage to head over to the Sunway Putra Mall a couple of days ago, but well, because I wasn't so well, my husband was nice enough to drive me there. I wasn't at my optimum self to drive myself there.

It proved to be a great move though as I was sent on a lovely journey amidst brilliant red cherry blossoms and peonies...and I was most fascinated to watch a pair of yellow and purple Northern Lions resting patiently while waiting for the ceremony to begin and even nodding off until they rolled on the floor. 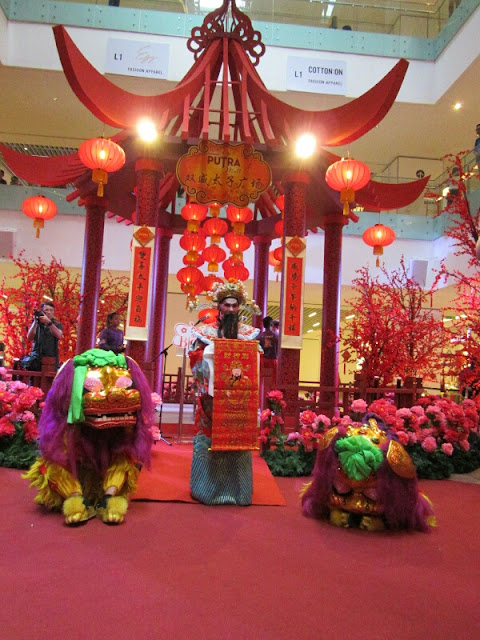 Sunway Putra Mall did not pull any stops to make the launch of their Lunar New Year Launch. This is after all the mall’s first Lunar New Year celebration since their opening in May 2015. 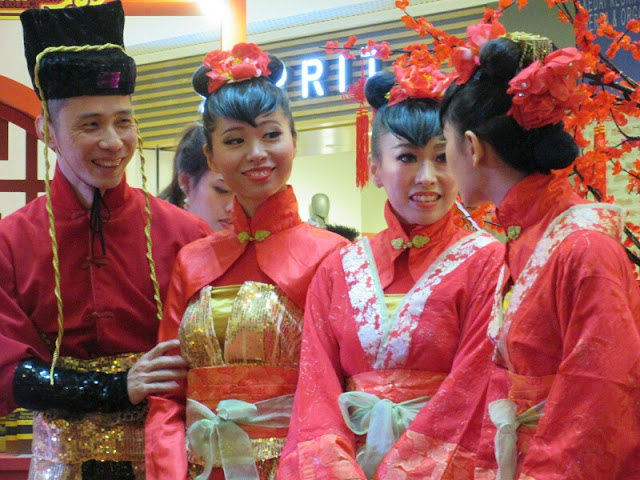 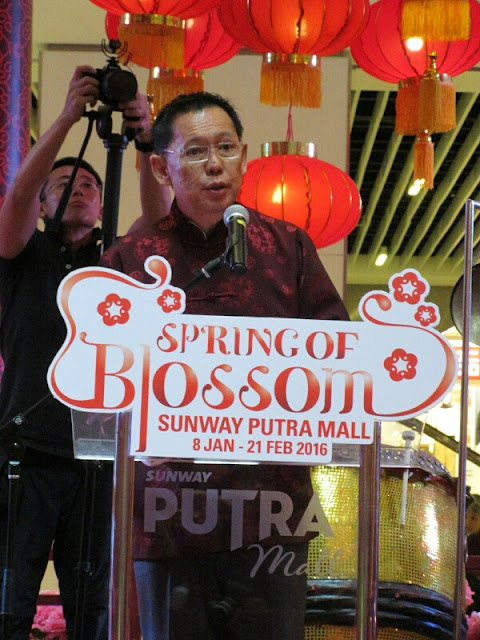 “This Lunar New Year launch is the last leg of the long list of celebrations that began with Raya, Deepavali and Christmas. We at Sunway make it a point to celebrate national celebrations together and more importantly, celebrate the spirit of togetherness. We would like to take this opportunity to wish everyone Happy Lunar New Year and Gong Xi Fa Cai,”  Mr HC Chan said. 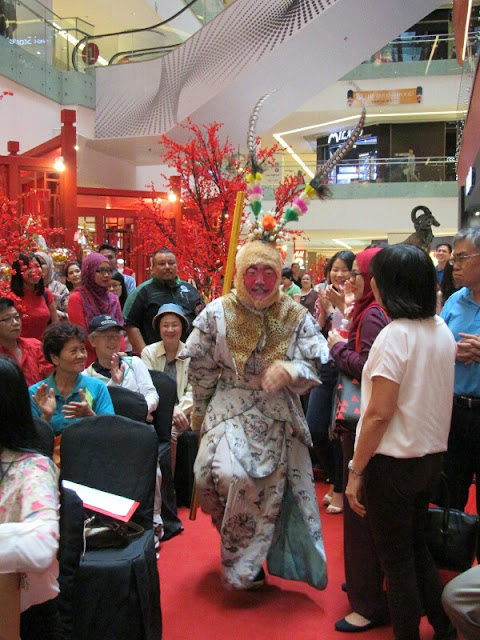 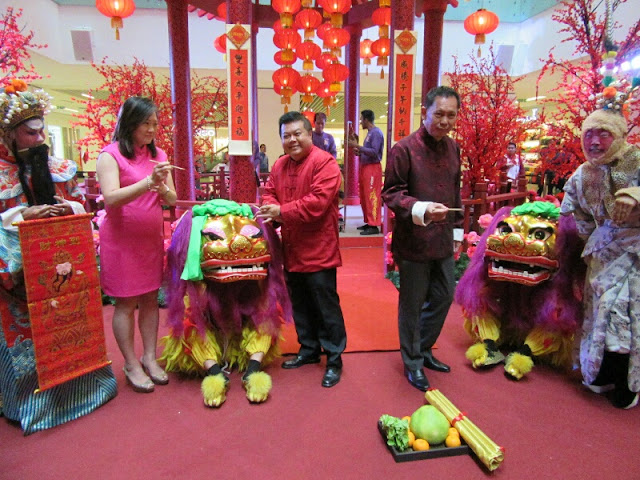 To mark the special occasion, Mr Chan, Mr Tan and Ms Phang performed a special eye-dotting ceremony. Just as they were about to paint the eyes on the slumbering lions, the Monkey King made a grand entrance and proceeded to accompany the VIPs as they dotted the eyes of the lion. 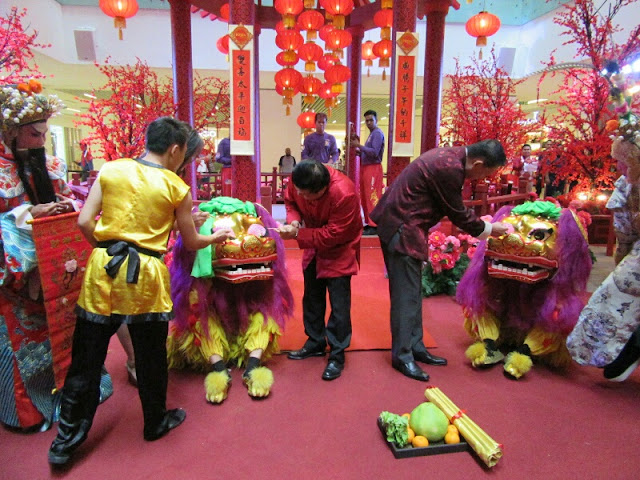 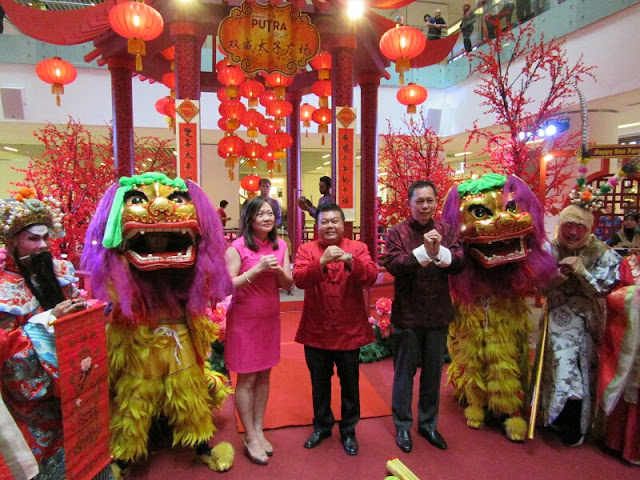 Moments after the lion’s eyes were dotted, the two mythical creatures came to life accompanied by the sound of thundering drums and proceeded to thrill the crowd by demonstrating their skillful movements and attention that seemed to be centred on the magical ball 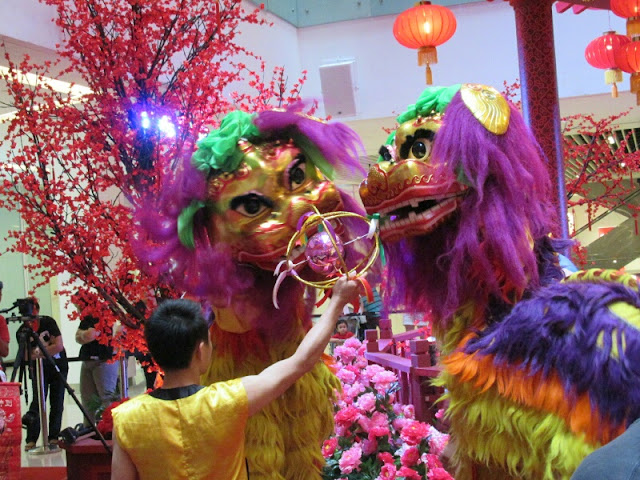 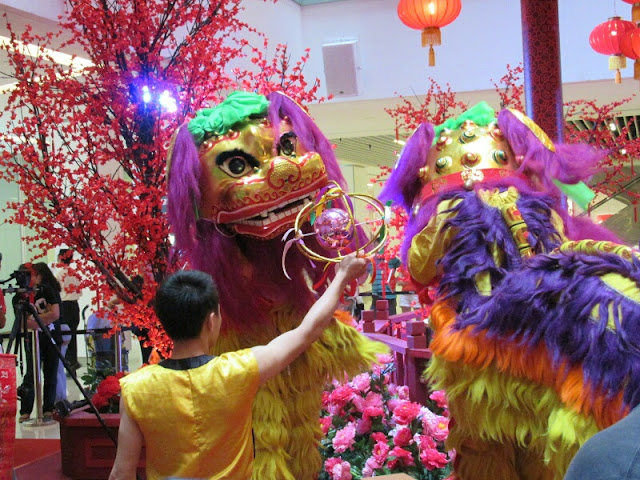 The Northern Lion Dance seems like a very active, happy, and playful performance. In their performance, the shaggy lions will joyously and actively chased after the ball, by leaping over tables, chairs, spinning themselves in 360 degrees stunt and rolling over one and another. 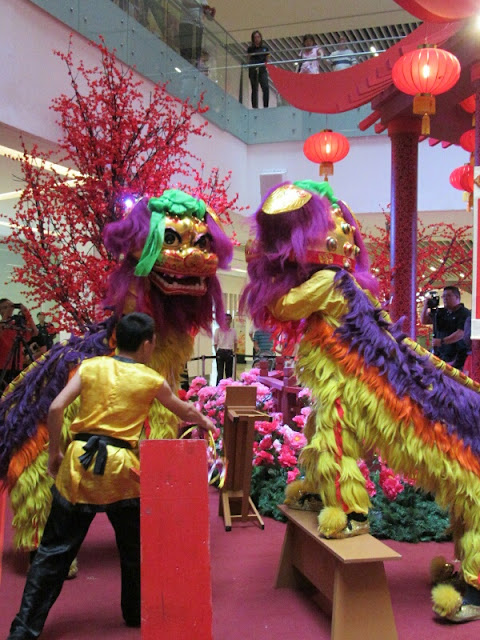 It is definitely a very fun and interesting performance, so if you are lucky to catch it, do enjoy it.... 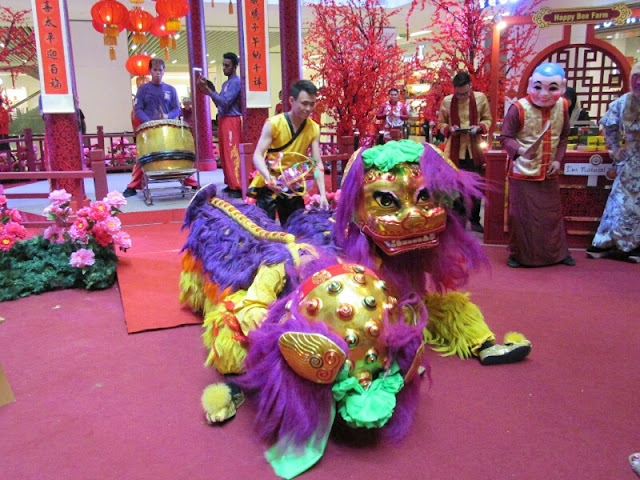 Mid-way through the performance, one of the lions consumed a pomelo, a symbol of good luck, held by Mr Chan, and presented a neatly peeled fruit in the shape of a flower moments later. 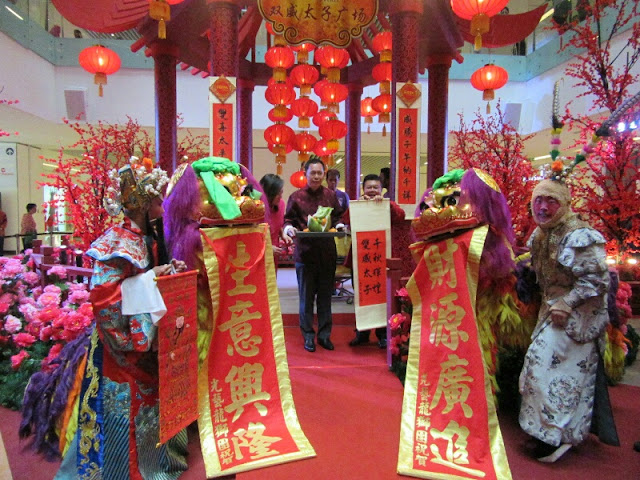 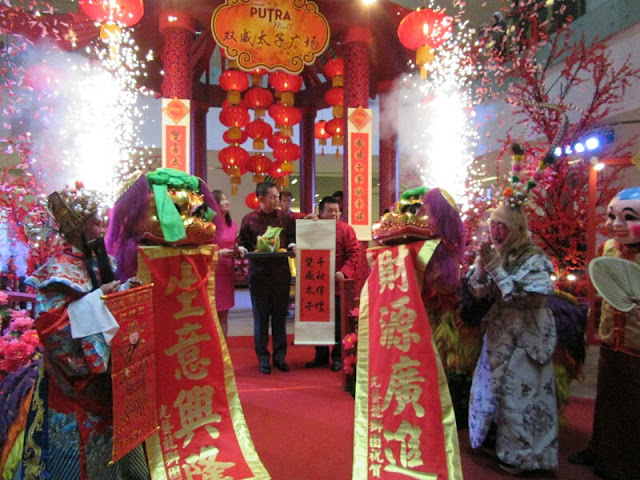 At the climax of the lion dance, a red scroll was given to Mr Tan. It was then unraveled to revealed the auspicious message “May Sunway Putra Mall shine and have success all year long” followed by the bursting of confetti and lighting of a fire fountain. 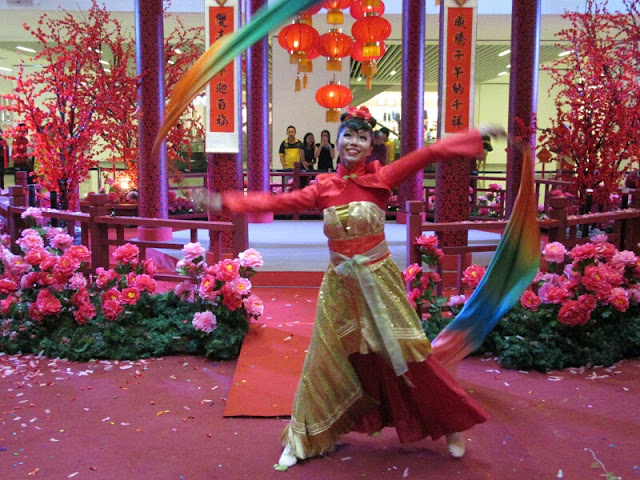 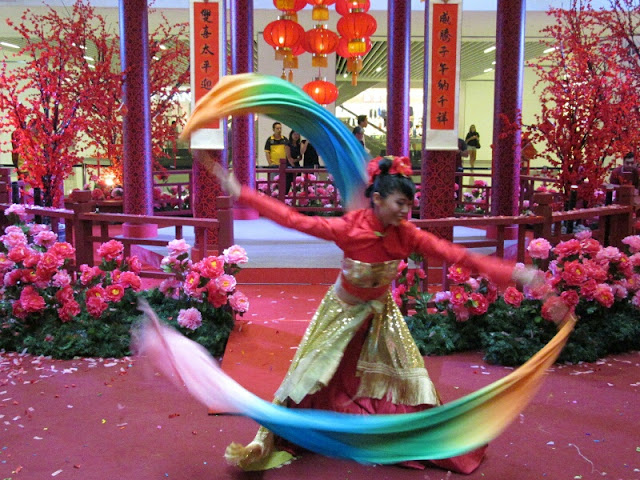 Guests, members of the media and shoppers were then treated to ribbon dance and fan dance by Sunway Putra Mall's talented dancers... 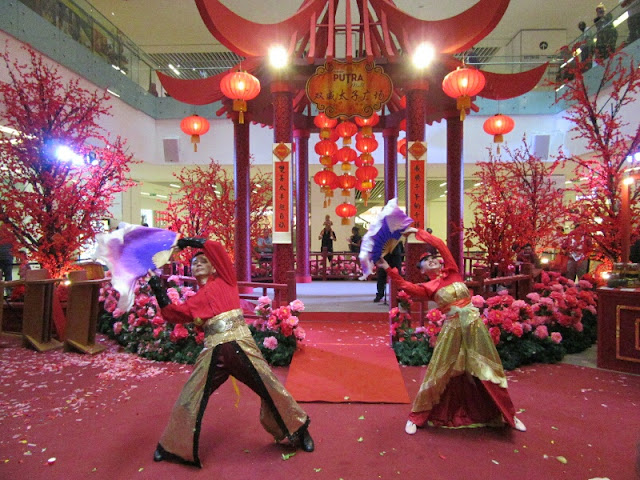 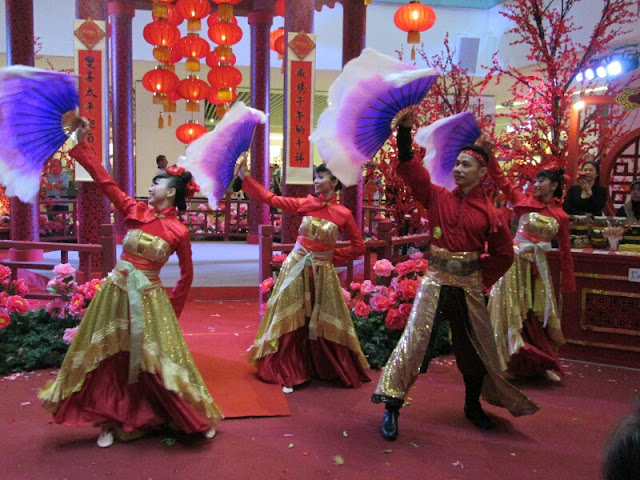 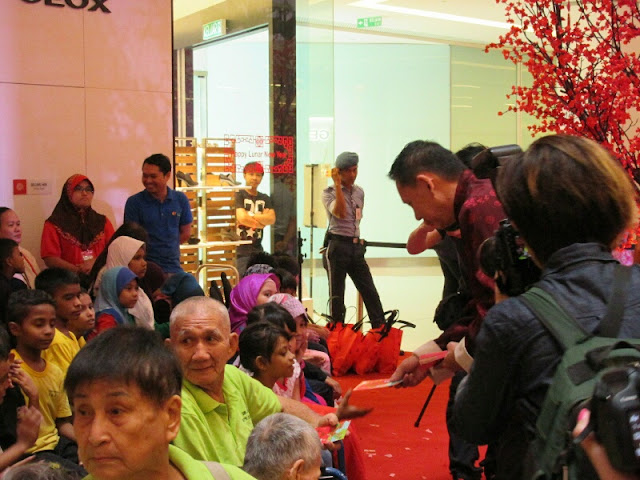 Mr Chan proceeded to give angpaos followed by Mr Tan and Ms Phang who handed out goodie bags, which were specially sponsored by Cold Storage and Bread Story, to the children of YCK and senior citizens as a show of Sunway’s support for these institutions and to brighten up their day 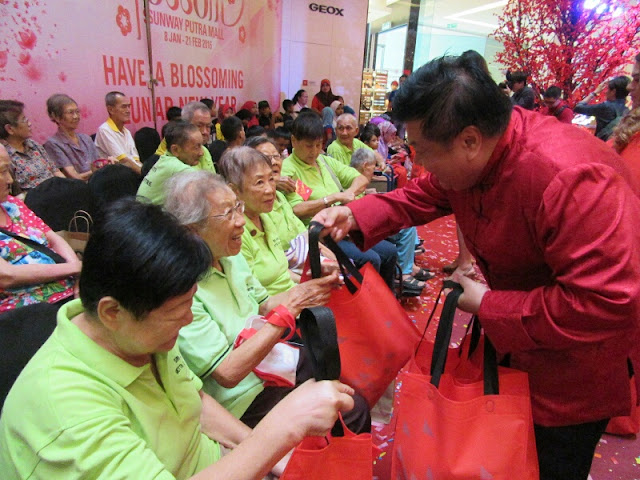 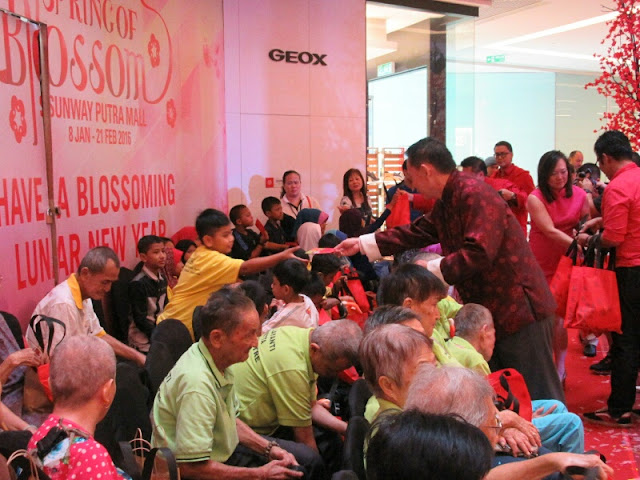 From now until 21 February 2016, shoppers will be enchanted by a completely red concourse where a majestic pagoda stands among the red cherry blossoms. Get your New Year essentials at the Spring Flower Market and Lunar New Year bazaar, happening at the Main Atrium, Ground Floor or browse through the various festive offerings in the mall. 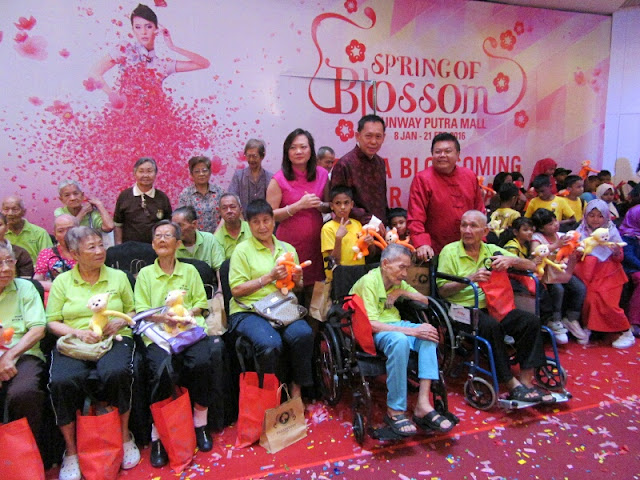 In the spirit of spreading wealth and prosperity, Sunway Putra Mall has attractive redemptions spread across 3-tiers to be offered to shoppers.

Shoppers who spends RM200 in 3 receipts, they can redeem 2 sets (3 sets for HSBC, the official bank partner of Sunway Putra Mall, cardholders and Sunway Pals members) of Prosperity Red Packets.

As it is The Year of the Monkey, Sunway Putra Mall’s next redemption tier features an adorable Monkey Plush Toy for shoppers who spend more than RM600 (RM500 for HSBC cardholders and Sunway Pals members) in 3 receipts. 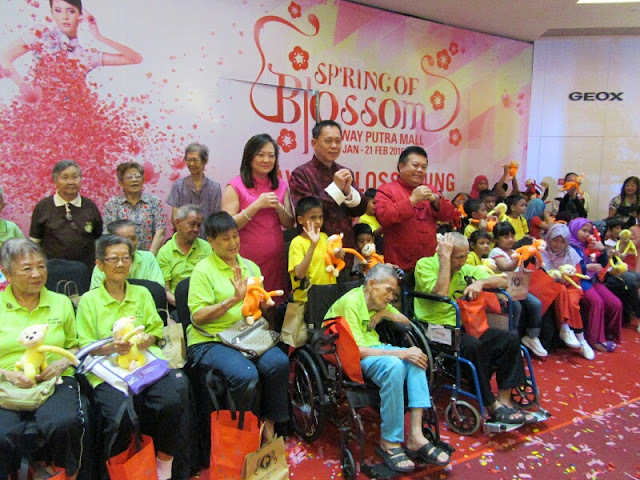 Apart from that, the mall has organized several performances and activities to entertain shoppers during the festive season.

Shoppers can be thrilled by the amazing Northern Lion Dance and traditional Chinese dance performances and even try their hand at the flower arrangement workshop and take home their creation.

Lucky shoppers may even get to meet the God of Fortune when walking around the mall and receive an angpao and mandarin oranges from him. 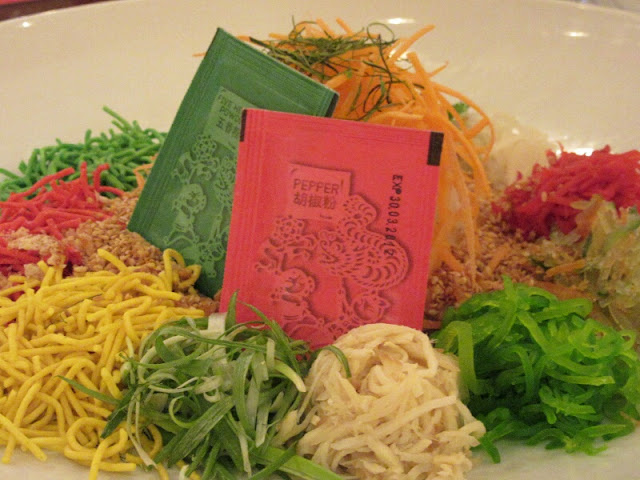 We were then ushered to Selera Street food hall for a special Yee Sang tossing celebration. 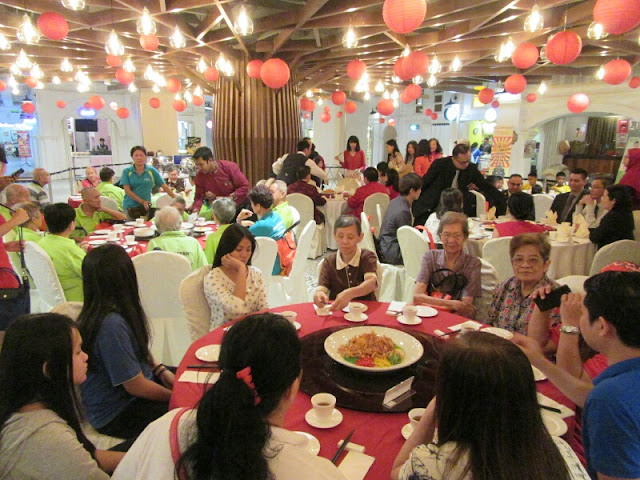 It was kinda fun watching the under privilege children trying to toss yee sang for the first time... 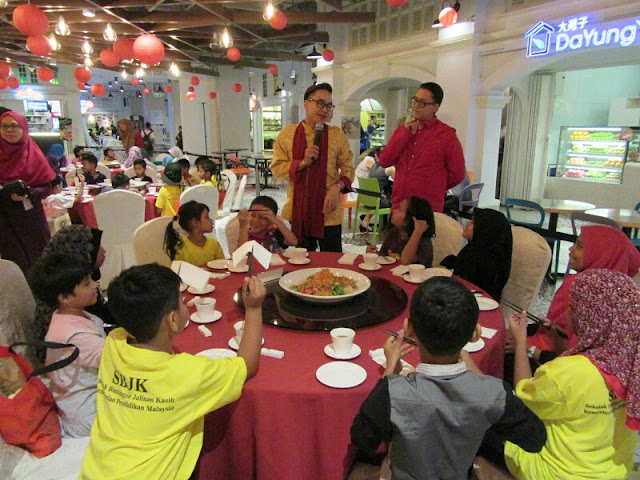 And this was done after emcee Cody gave them a brief tutorial of how to do so.... 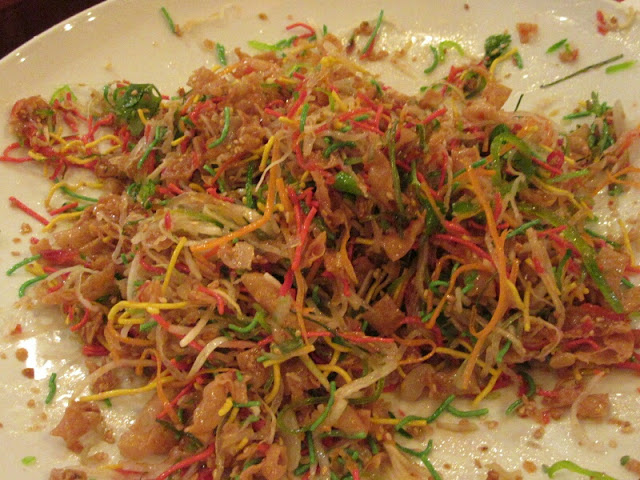 So come together with family and friends and get into the festive spirit this Lunar New Year at Sunway Putra Mall from now till
21st February 2016.

For more information check out www.sunwayputramall.com or their Facebook for details.