Spooky picture of a fatal accident 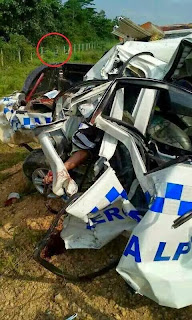 There was a fatal accident along the East Coast highway (LPT) which involved a Toyota Hilux and a tanker which caused the death of a highway patroller.
The accident occurred when th highway petrol car heading to Kuala Terengganu stopped at the emergency lane.


The driver of the oil palm tanker lost control of his vehicle which crashed into the car, causing the death of Razali Ishak, 44, who was crushed to death.
Razali colleague was fortunately rescued by passerbys.
The accident picture was shared in the  Friends of BN facebook page and garnered the regular condolences and Al- Fatihah comments while some started inquiring about the strange entity in the picture.
It was an image of someone or rather something creepy looking watching the accident from afar. Who or what was that....