Celebrating the screen goddesses bringing inspiration and entertainment to Viu-ers

I love my K-dramas and watch them a lot more then other TV series... and one of the best place I watch it would be over Viu.

International Women’s Day is this March. In conjunction with this celebration of the social, economic, cultural, and political achievements of women, Viu will be featuring amazing K-dramas that will not disappoint. Showing the courage and determination women have to reach their dreams and goals, these select dramas celebrate the abilities of women.

‘Weightlifting Fairy Kim Bok Joo’ features women power through a promising female weightlifter, Kim Bok Joo (Lee Sung Kyung), who has a bright personality and strong sense of justice. She attends Hanwool College of Physical Education, a university for top-notch athletes. Through her struggles balancing family and weightlifting, she has to do her best not to disappoint her ailing father and her teammates in Hanwool.

Sung Kyung started with supporting roles in television dramas which brought her to the lead role in this romantic drama. Her journey pretty much sounds like the character Bok Joo in the drama, fighting to reach to the top.

Stay tuned to Viu every Wednesday and Thursday to catch this adorable and fruitful drama that will make you emotional, and then make you laugh the next second.
Picture source: MBC

A drama series that will catch your heart through the fierce competition between Pyo Na Ri (Kong Hyo Jin) and Lee Hwa Sin (Cho Jung Seok), both TV anchors. Pyo Na Ri, who hails from a third-rate college and does not have shining resume, is willing to work very hard to fight for the position. She then meets Lee Hwa Sin (Cho Jung Seok) who is not only good looking but has notable journalistic talent.

Don’t miss the two loves birds as they slowly develop their relationship every Wednesday and Thursdays, only on Viu.

A drama filled with the excitement of friends looking out for each other. It features Sung Joon (Park Seo Joon) who plays an ugly and fat young boy that doesn’t have many friends except his one true friend, the popular and pretty Hye-Jin (Hwang Jung Eum). Together they share a special connection of friendship.

After 15 years, Sung Joon returns from the United States as a handsome and perfect young man while Hye Jin looks nothing like her former pretty self. Hye Jin decides to ask a favor from her best friend to switch their identity. Will Hye Jin continue to hide her true identity from Sun Joon or will she reveal herself?

Hwang Jung Eum debuted with a K-pop girl group in 2001 as a lead vocalist but left to pursue a solo career. Her acting career spiked and she became popular through an onscreen pairing with Kim Jong-min.

Stay tuned to newly aired She Was Pretty and find out what happens to them on Viu. All episodes are available on Viu. 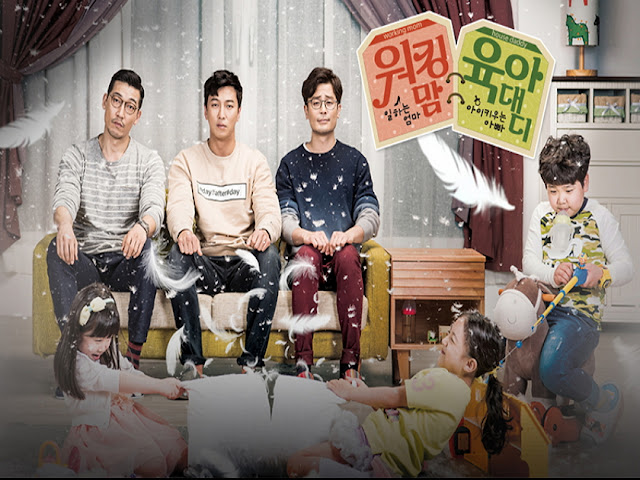 A family oriented drama featuring Kim Jae Min (Park Gun Hyung), a sweet husband who will do anything for his wife Mi So (Hong Eun Hee). Mi So is intelligent with a great personality; when she learns that she is pregnant with their second child she worried that she may not have time to pursue her career. Kim Jae Min then decides to submit for paternity leave to stay at home to raise their children. This drama portrays the new era of a working mom and a stay at home dad, where clearly the breadwinner does not necessarily have to be the male player.

Hong Eun Hee, who plays the strong role of Mi So graduated from Seoul Institutes of Arts as an actress. She has been featured in many television series including dramas, variety shows and movies. She also won the Golden Acting Award, Actress in a Serial Drama for MBC Drama Awards.

All episodes of Working Mom Stay Home Dad are now available on Viu. What’s best is users are allowed to view it for free! Don’t miss this chance to catch this loving drama.

What’s a woman to do when life gives you lemons? Shim Jae Bok (Ko So Young) has sacrificed her own personal happiness to try and be the best wife to her trouble causing husband and their two children. Despite her dreams, her career never took off as a temporary employee. On the other side, Lee Eun Hee (Jo Yeo Jeong) has the world at her feet. When Jae Bok and Eun Hee both face a difficult situation, Jae Bok leans on Lawyer Kang Bong Goo (Sung Joon) whom she meets by accident.

Ko So Young is an actress and model graduated with a major in drama and cinema. Ko debuted in the TV drama Love Tomorrow in 1993 and quickly established herself as a star in her own right for her generation.

Can Jae Bok regain her own self-worth and happiness despite all the hardship? Catch the newly aired Ms Perfect on Viu every Monday and Tuesday.

A cute and sweet drama involving Eun Hwan Ki (Yeon Woo Jin), a CEO of a public relations company who is an extremely shy person and loves to hide in his penthouse office. Due to his personality, his employees don’t know him well and give him a nickname as a penthouse ghost.

On the other hand, loud and cheeky Chae Ro Woon (Park Hye Soo) begins to work at Eun Hwan Ki’s company. She is energetic and has received recognition for her work; she is loud and clear as well as very determined on what she wants. But her only current interest is in CEO Eun Hwan Ki. Will Ro Woon successfully transform her boss Hwan Ki into a normal person?

Park Hye Soo was a contestant on season 4 of K-pop Star Aired from November 23, 2014 to April 12, 2015. But then she found her calling to be an actress and started off with her first drama series Yong Pal with Kim So Hyun, and this is when she flourished as a full-time actress

Catch My Shy Boss every Monday and Tuesday on Viu. Don’t miss this chance to find out how CEO Hwan Ki reacts towards large crowds.

Keep yourself updated with the latest Korean shows, drama, entertainment news, and many more with Viu on their website https://www.viu.com/en or you can download the app available in app stores and play stores.