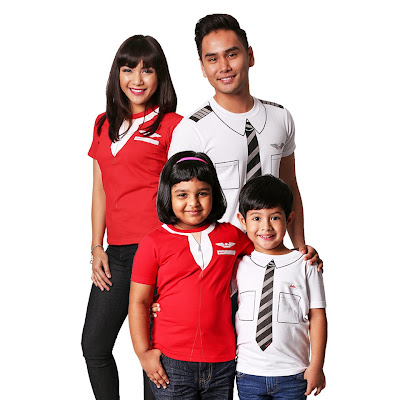 AirAsia has produced #AirAsiaMAKNA t-shirts - a new, limited edition designed t-shirts to raise funds for the National Cancer Council of Malaysia (MAKNA), retailing at RM30 each. The t-shirts are available for males and females in adult and children sizes.

Designed and produced internally by AirAsia Allstars (employees), the t-shirts feature the iconic AirAsia Captain and cabin crew uniform, which carries the MAKNA logo and its tagline 'A Meaning To Life' at the back of the t-shirts; sending a message of positivity as part of the CSR campaign.

AirAsia Berhad's Chief Executive Officer, Aireen Omar said, "All proceeds from the sales of this limited edition t-shirts will be channelled directly to the National Cancer Council of Malaysia. We hope to lend a helping hand and contribute towards the cause of eradicating cancer, as well as to provide much-needed care for those who are not able to afford it through this #AirAsiaMAKNA campaign. More than a hundred thousand cancer patients have received assistance from MAKNA and we hope to boost the number even further from the funds collected from this campaign."

"More importantly, this campaign is specifically designed to generate awareness and ensure the public are well educated about cancer. MAKNA will also be present at all of our sales location to provide valuable information about cancer prevention and the services they provide for cancer patients. The t-shirts' designs are very cool and we feel it is a positive way to raise much needed attention for this cause, and perhaps be a 'walking billboard' for cancer awareness," added Aireen.

Farahida Mohd Farid, General Manager MAKNA said "Cancer being a global threat has pushed MAKNA to work towards in keeping the newly diagnosed cancer cases low. This effort needs continuous awareness and support from all. Preventive programs are important to keep survival rate high through early detection. MAKNA Mobile Mammogram Unit aims to tackle early detection of Breast Cancer which is the number one killer for women.  Partnership with AirAsia Berhad is an opportunity to voice out our nationwide appeal and stress the importance of healthy living. We hope this campaign promotes greater significance and send a meaningful message to the public as well as give a  feel good factor of wearing these special edition t-shirts and hopefully for them to get themselves checked regularly".

The sales of t-shirts for this campaign is purposely designed as on-ground events, where both AirAsia and MAKNA can join hands to create awareness towards cancer through information disseminated at all of the event venues.

AirAsia is also running a photo contest in conjunction with this campaign. Everyone who purchased the exclusive t-shirts are eligible to win a pair of flights to selected AirAsia or AirAsia X destinations, just by uploading the most creative photo of themselves in the t-shirts on Twitter or Instagram and hashtag #AirAsiaMAKNA. Winners will be notified by AirAsia at the end of the campaign period at the end of June.

The public can also visitwww.airasia.com/airasiamakna for more information.

Apart from this #AirAsiaMAKNA CSR campaign, AirAsia Berhad, together the philanthropic arm of the airline, AirAsia Foundation; have raised RM902,447 in support of MERCY Malaysia through the 'East Coast Flood Relief Fund' campaign early this year. The funds raised have helped the victims of monsoon flood which hit the country in late 2014 and early 2015; and contributed towards the purchase of new medical equipment such as hospital beds, medical and disposable supplies, health check-up and screening equipment for 14 rural clinics in Kelantan and Pahang for a start. Free flights for over 200 medical personnel were also provided, along with over 28 tonnes of free cargo space to assist various NGOs and humanitarian agencies during the floods.

MAKNA aims to mobilise resources in order to provide curative, preventive, research and support services to cancer patients and their families, high-risk groups and the general public in Malays and the region. Their objective is to fight cancer and reduce related pain, morbidity and the suffering that cancer patients undergo.