EVERYONE’S FAVORITE TRIO OF CHIPMUNKS ARE BACK

My daughter loves Nickelodeon, there are tons of her favourite shows in there and she loves Alvin.... and when she found out that they were going to be airing  ALVINNN!!!! and The Chipmunks she was so happy!!! Nevermind that she is now a tween, she will always be watching Nickelodeon and her favourite characters and shows....

Nickelodeon and Bagdasarian Productions are bringing Alvin, Simon, Theodore, and The Chipettes back to television in the all-new, CG-animated series ALVINNN!!!! and The Chipmunks premiering Friday, 8 May at 5.50pm (TH/WIB), 6.50pm (HK/SG) and 7.30pm (PH) and Friday, 15 May at 7.55pm (MY) on Nickelodeon. The new series reunites Janice Karman and Ross Bagdasarian, the duo behind the original 1980s animated series and three blockbuster feature films, and will mark the return of the franchise to television after 20 years. ALVINNN!!! and The Chipmunks follows the friendship of Alvin, Simon, Theodore and The Chipettes as they face growing up and learning new life lessons. Each episode will feature an original song produced by Bagdasarian. In the half-hour series premiere, Alvin is not thrilled about going back to school; that is, until he sees the new Principal and develops a crush in “Principal Interest.”  Then in “Talking Teddy," Theodore’s new talking-teddy bear is driving Alvin and Simon nuts. The two decide to rewire the bear to follow their instructions. 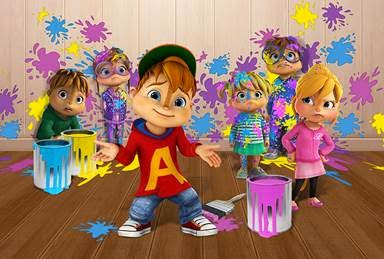 ·         “The Alvin & The Chipmunks franchise is loved by four generations of fans around the world and is a great addition to Nickelodeon’s existing line-up of funny, smart content.” - Jules Borkent, SVP, Global Acquisitions and International Programming, Nickelodeon, Viacom International Media Networks.
·         After the premiere, new episodes of ALVINNN!!! and The Chipmunks will air weekends from Saturday, 16 May at 10.30am (TH/WIB), 11am (PH) and 11.30am (HK/SG) and Saturday, 23 May at 9.25am (MY) on Nickelodeon.
·         Season one of the series will feature 52 x 11 minute episodes and is created by Janice Karman and produced by Bagdasarian Productions and OuiDO! Productions. Alvin and The Chipmunks is a classic, global property that was created by Ross Bagdasarian Sr. in 1958. Considered to be one of the most successful kids brands in the world, Alvin and The Chipmunks has secured a loyal fan-base and garnered more than 50 million+ viewers in over 150 countries and five Emmy award nominations.

Nickelodeon's brands are seen globally in more than 450 million households in over 100 territories via more than 70 locally programmed channels and syndication. For more information about Nickelodeon in Asia, visit www.nick-asia.com.