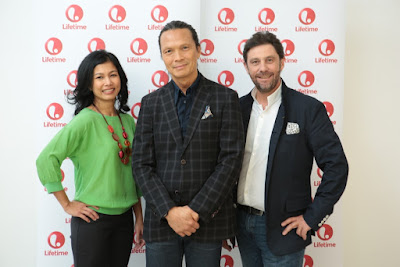 Susur Lee has often been called the “Father of Fusion” and has won numerous culinary awards including Food and Wine magazine’s “Ten Chefs of the Millenium” and the 5-Star Diamond award from the American Academy of Hospitality Sciences.  He is the owner-chef of four highly-rated restaurants in Canada including LEE, Luckee, Bent and LEE Kitchen in Toronto, as well as TungLok Heen in Singapore.  For 20 years, he has been the Executive Consulting Chef for the TungLok Group, which owns over 40 restaurants in Asia.

Chef Bruno Ménard earned 3 Michelin Stars at L’Osier, a Tokyo-based restaurant that has been voted one of the top French restaurants outside of France.  Bruno has spent 20 years establishing some of the best restaurants in Asia and currently runs a top-tier culinary consulting firm in Singapore.  He was born in France to a chocolatier father and a patissier grandfather.  He brings to the show deep culinary expertise and an unparalleled passion and energy for gastronomy.

Audra Morrice is said to be the next Martha Stewart of Asia.  Her success on MasterChef Australia cemented her career in food and launched her into the world of culinary TV.  Audra has a successful catering business, hosts pop-up restaurant events and conducts South East Asian cooking classes.  She is going to publish her highly anticipated cookbook and launch her own range of artisanal food products.  Born in Singapore of Indian and Chinese descent, Audra is currently based in Australia.

“We considered many chefs from around Asia and overseas to find the right combination of knowledge, passion, charisma and warmth,” said Michele Schofield, Senior Vice President, Programming & Production, A+E Networks Asia.  “Susur brings stellar Asian food expertise and extensive technical knowledge, while Bruno has undisputed Michelin-rated credentials based in classic French cuisine.  Audra’s cooking is rooted in South Asian cuisine as well as pastry; she has a unique relatability to the contestants and is testament to the opportunity that MasterChef offers home cooks.”

MasterChef Asia is being produced in Singapore and is set to air in 2015 on Lifetime (Astro Ch 709).  Season 1 is presented by the Singapore Tourism Board and Knorr, in association with Panasonic, Changi Airport Group and Carlton Hotel Singapore.

Based on an original format by Franc Roddam and represented internationally by Endemol Shine Group, MasterChef is the most travelled food format in the world having sold to 52 territories and counting.

One could say that the virtuoso Chef Susur Lee was born with a spoon in his mouth- but it would be a tasting spoon, not a silver one.

From humble beginnings as a 16-year-old apprentice in Hong Kong to his Atlas stride atop the fickle universe of celebrity chefdom, Susur has never deviated from a consuming passion: to create tantalizing dishes that blend textures and flavours in glorious harmony. Balancing the epicurean traditions of China with the classical techniques of French cuisine, Lee improvises a daring and original culinary aesthetic.
Praised as one of the "Ten Chefs of the Millennium" in 2000 by Food & Wine magazine, Susur is still at the top of his game. In addition to helming three restaurants in Toronto—Lee, Bent and Luckee-- and overseeing his prestigious TungLok Heen in Singapore’s Hotel Michael, Lee makes numerous television appearances and travels the world as guest chef and consultant. Following appearances on Iron Chef America, he became a media sensation on Top Chef Masters, where he vanquished 20 competing chefs and crossed filleting knives with his competitor in a kitchen showdown. Susur has also judged on Food Network Canada's Chopped Canada.

Over the past two years, Susur has broadened his culinary horizons in his hometown, Toronto. Bent, a hipster boutique eatery on the trending foodie strip of Dundas West, opened in 2012.  In spring 2014, he, together with partner Henry Wu launched Luckee, a contemporary Nouvelle Chinoise restaurant serving dishes and dim sum inspired by the classic cuisines of Guangzhou, Hunan, Shanghai and Szechuan, but transformed and enhanced by Lee's signature artistry. Susur has recently welcomed his two older sons, Levi and Kai, to the management team, ensuring that great food is all in the family.

Looking to the future, the sky appears to be the limit – literally – for Susur’s global brand. Together with HMSHost, Lee has recently launched a bistro-style eatery, Lee Kitchen at Toronto's international Pearson Airport. Globetrotting gastronomes are sure to rejoice, and airplane food will never be the same.

The French restaurant L'Osier is tucked along the upscale Namiki-dori street of Tokyo's tony Ginza District, where luxury shops attract customers with deep pockets. Ten years ago, when Bruno Ménard took over as head chef from Jacques Borie, who has run the kitchen for 20 years, it was packed every night with customers clamoring for classic French food.
"First, everybody was looking at me like, show me, because I was the new guy in town," Bruno said. "My challenge was to make sure that this restaurant is going to be full."
He has succeeded. L'Osier, which is operated by Shiseido Co., Japan's largest cosmetics maker, has remained popular. Since the Michelin Guide began to rate Tokyo restaurants in 2007, it has received three stars—the top rating—every year.
And Bruno has accomplished it all without classic French food. Instead, he serves neoclassic French with a hint of Japanese. Much of the art of his cuisine, he says, can be summed up with the word terroir, that is, the charm of his food comes from his respect for the local soil.
While he imports specialty foods like black truffles, olive oil and homard (lobster) from France, as much as possible he uses fresh, in-season Japanese produce and fish, including takenoko (bamboo shoots), soramame (fava bean) and nijimasu (rainbow trout). He also likes to use locally grown shiso herbs for purée and yuzu citrus for dressings. From autumn to winter, spring to summer, the chef regularly invents new dishes using seasonal Japanese foods. In early spring, a popular local dish is bamboo shoots with rice topped with sansho leaves. Bruno's version? A creamy risotto with bamboo shoots and black truffles. The early springtime dish takes advantage of the end of truffle season in France and the start of takenoko season in Japan.
"My base is French, very French. But I travel everywhere so I've got experiences around the world for different type of cuisines," Bruno said. "I add just a small touch of everywhere I go."
The 53-year-old chef, who lived in Tokyo with his wife and son, was born in France to a family with culinary heritage. His father was a chocolatier; his grandfather, a patissier. Growing up eating chocolate, Bruno invented a condiment called Vinecao, a mixture of cacao and vinegar, which he uses today in sauces and dressings for meats and seafood.
He showed a strong interest in cooking at an early age, so his father suggested he take a summer job at a restaurant near his hometown of Tours at the age of 8. "The first dish I did was a recipe called croquette Pojarski," said Bruno. "At 8 years old, I knew I wanted to become who I am today."
Bruno first came to Japan in 1995, working as an Executive Chef at Tatou Tokyo, a popular French restaurant in the city's Roppongi District, and moved to Osaka in 1997 to take over the French restaurant at the Ritz-Carlton hotel. It was there, at La Baie, that Bruno began to experiment with French and Japanese cuisine. His French seafood kaiseki, a traditional multicourse Japanese meal, became well known in the city.
Said Francois J. Cnockaert, then a food-and-beverage manager at the Osaka hotel, now the general manager of the Ritz-Carlton in Tokyo, "I wanted a different kind of French restaurant, one that wasn't too stuffy or too formal. Bruno’s passion was exactly what I had in mind to create the concept."
He left Osaka in 2001 for the U.S. and after a four-year stint at the Ritz-Carlton hotel in Atlanta, Bruno moved back to Tokyo in 2005 to head L'Osier.
Inside the restaurant's 68-square-meter kitchen, Bruno and his staff of 12, mostly Japanese, communicate in what the chef calls "the L'Osier language", a mix of Japanese, French and hand gestures. But it is unusually quiet most of the time, as his team has learned to monitor his moves and react accordingly, rather than wait for a verbal command from the chef.
"The point here (which is) something very, very important, is to have team spirit," he said, adding that managing a restaurant is like running a Formula One team. "I'm the guy driving the F1 car, which is very fast. If you want to be the world champion, you are not the world champion, your team is the world champion."
When the energy comes together, it is umami, a word Bruno uses to describe the moment when everything goes perfectly right.
Armed with his 30 years of experience and his knowledge of the Asian culture, Bruno now runs a top-tier culinary consulting firm in Singapore.

Audra Moricce is a cook and a mother, best known as the finalist in MasterChef Australia 2012 who produced some of the most consistent and amazing dishes on the show. Acknowledged for her ability to both cook and bake, she was a favourite in this series of MasterChef.

Born to a Chinese mother and Indian father, Audra spent her formative years in the culturally rich heritage of Singapore.

“My childhood days were filled with visits to Kuching, Sarawak with my aunts and cousins. Each morning my uncle would walk about 7 or 8 or us kids three blocks to have what I believe to be the best laksa. Until today, I can still taste the beautiful flavours and picture the little coffee shop we would go to.”

Audra graduated from Canterbury University in Christchurch, New Zealand, with a Bachelor of Arts in Economics and Japanese and spent much of her working career in telecommunications in Singapore, New Zealand and Australia. Despite a very successful career in telco, winning multiple sales awards over the past several years, Audra’s passion was clearly in food and decided to follow her dream. In 2012, she took a break from work to compete in MasterChef.

Her style of food is eclectically Asian drawing influence from her Chinese Indian heritage. Her mother is her biggest inspiration. Through her upbringing as part of a large extended family on her mother’s side, she cooks with generosity and heart, food being an integral part of life.

“Some of the best times for me have been with friends and family around the dinner table. It’s immensely gratifying to cook and eat with your loved ones.”

Currently based in Australia, she runs a successful catering business for both private and corporate events. Her specialty dining event, Cook & Feast is an intimate cooking class coupled with a dining experience where diners not only learn to cook Audra’s dishes but also learn about their origins and heritage.
She runs regular cooking classes in Sydney and Singapore as well as corporate team building workshops. Her classes are incredibly hands on and simple to follow with a huge focus on the importance of cooking with fresh and good quality ingredients.
Working closely with the Singapore Tourism Board, she is currently an Ambassador, together with Tetsuya Wakuda, Antonia Kidman and Tom Williams for the Singapore Celebrity Concierge campaign. Her televised cooking show, Tasty Conversations is on GEM in Australia and FYI across Asia.
She has recently launched a range of food products that are available in Australia and Hubers in Singapore. Her highly anticipated cookbook is being launched in Sydney, London and Singapore in September and October 2015. The book pays homage to her upbringing in Singapore and includes stories about her life, travels and family.