5 things to do around Jonker Walk on a Sunday morning....

If you are looking at a list of “must-go” places in Melaka, you will be sure to find that Jonker Street will always be at the top of the list. It is also a must go place for those who would like to discover Melaka in an interesting way.

If you are just planning on spending an hour here before hopping to another major attraction, you might like to think twice as this is not an ordinary “street” – one can lose his or her sense of time and spend a whole day there just to check out the pretty old heritage houses and attractive shops along the street. 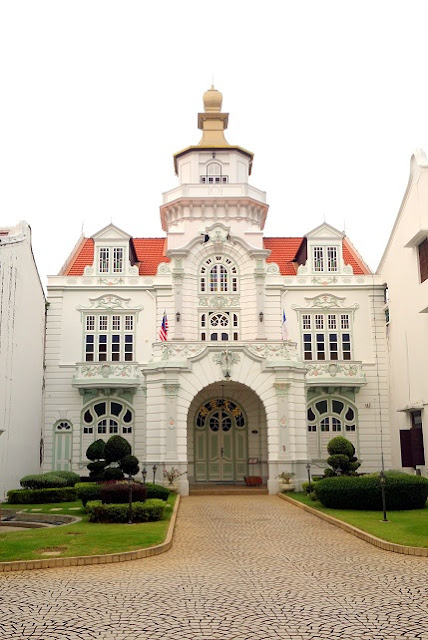 Jalan Hang Jebat, or Jonker Walk is it commonly known, is a street in historical Chinatown of Melaka starting just across the river from the Dutch Square. 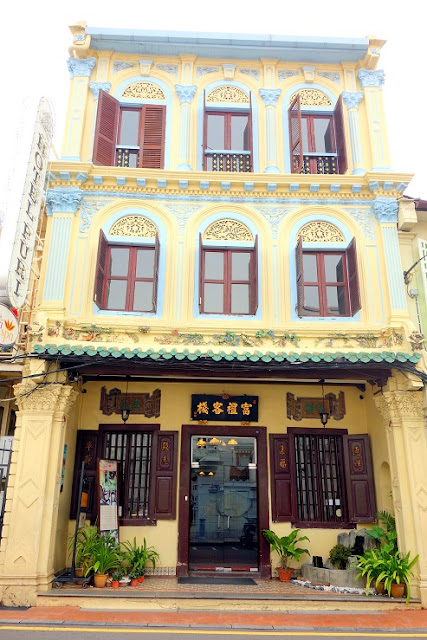 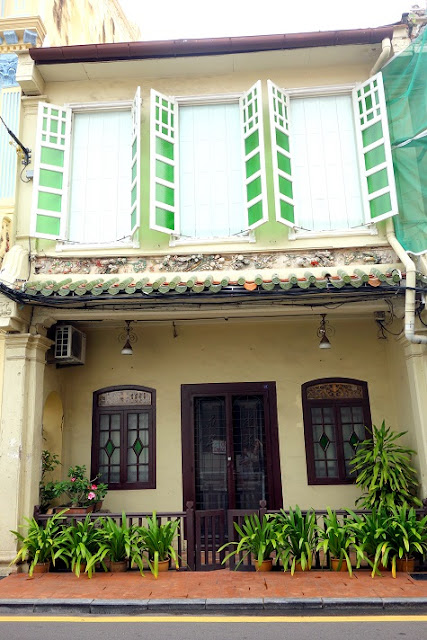 You can definitely find some of Malaysias oldest heritage buildings dating back to the 17th century which have been built witha combination of Portuguese and Dutch influences. 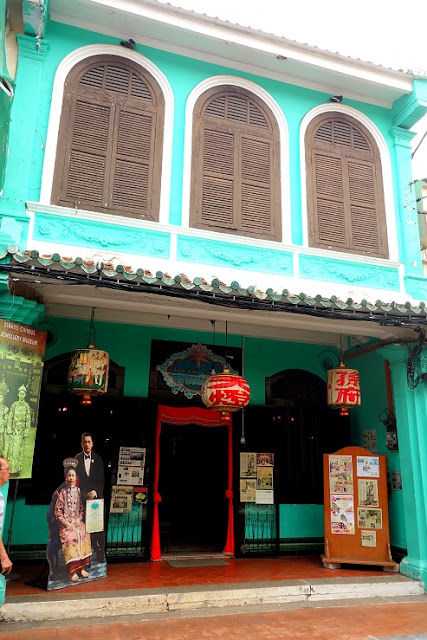 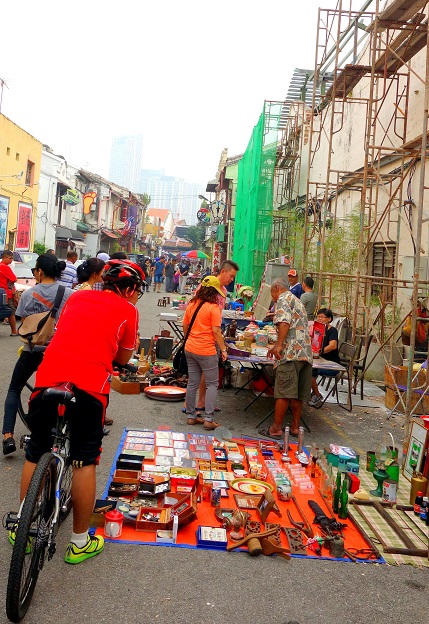 Every Sunday morning until 12pm you can enjoy the little antique market along Jalan Hang Lekir (right next to the popular Geographer Cafe). 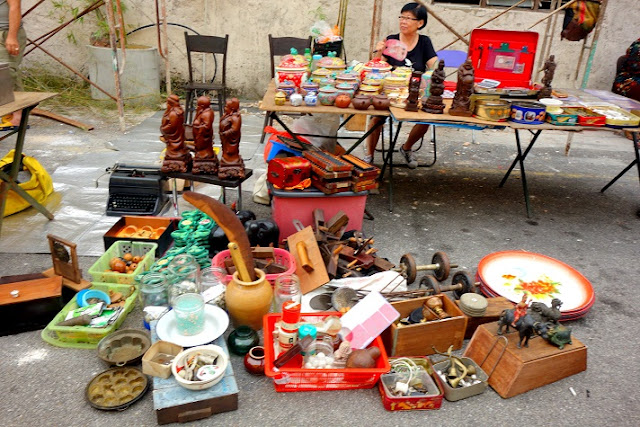 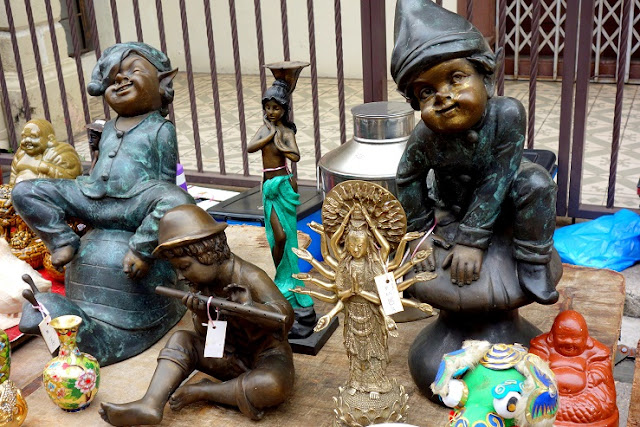 This is an amazing good place to find some old treasures and haggle for a bargain or two if you love antiquities or are in search of something unique.

It is here where you can find a variety of antiques, collectibles, ornaments, old coins and currency, posters, paintings, vinyl records, religious relics, old magazines and others... 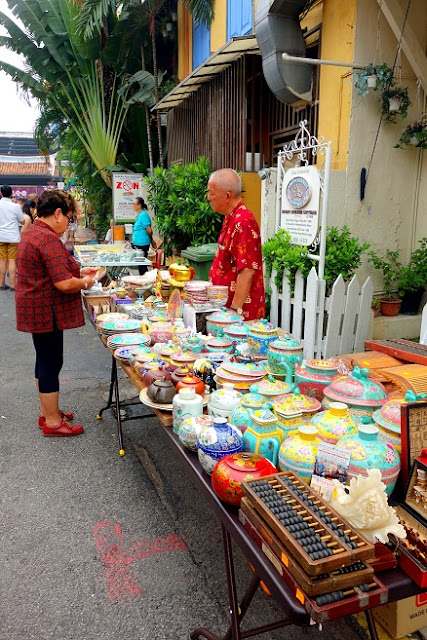 Check out and take photos of the 3 D Street Murals 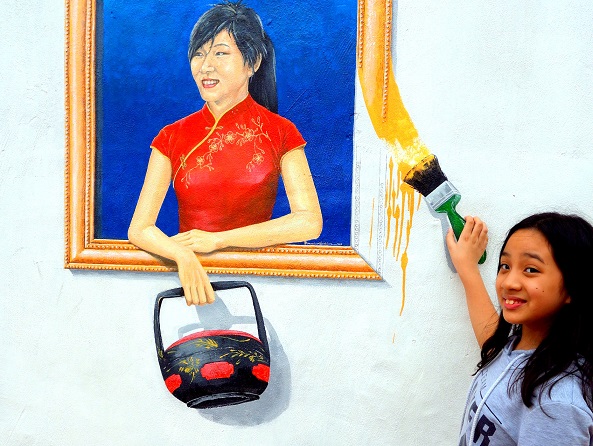 The 3 D Street Murals is located at the back lane in Jalan Hang Kasturi... which I happen across after paying my respects to Hang Jebat at his mausoleum. 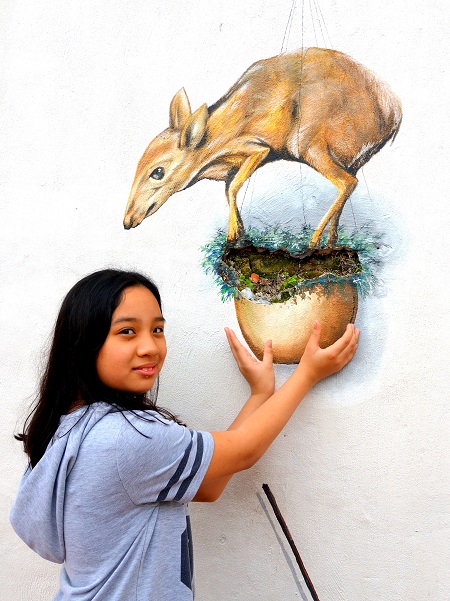 There are quite a number of interesting paintings and murals there you might like to take some pictures of if you liked art... 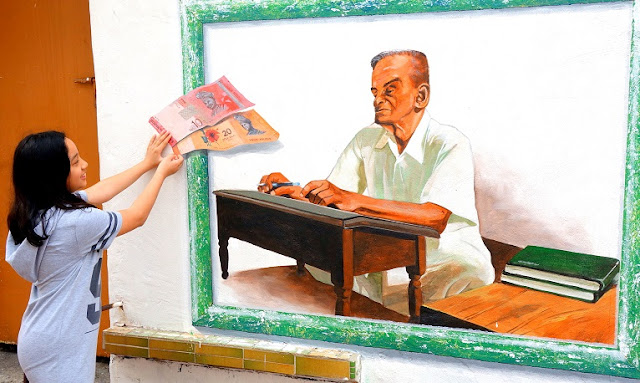 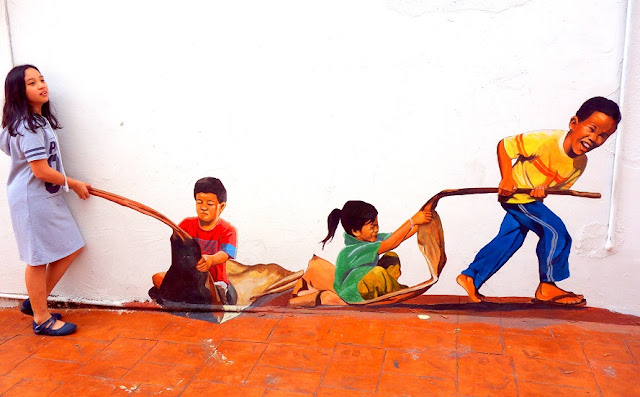 My daughter sure had a time of her life posing and taking pictures with all the street murals there.... 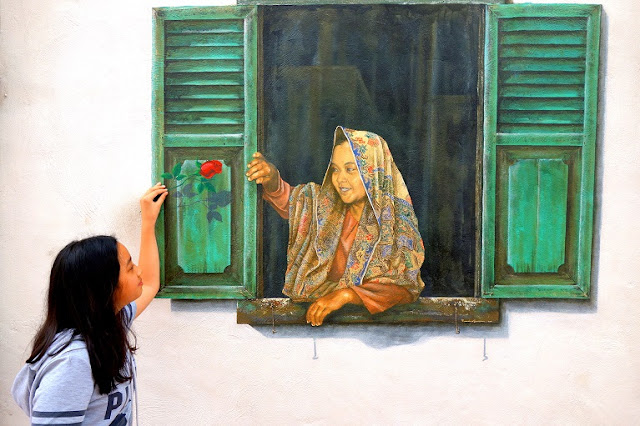 Have a drink or breakfast at the Cheng Ho Tea House 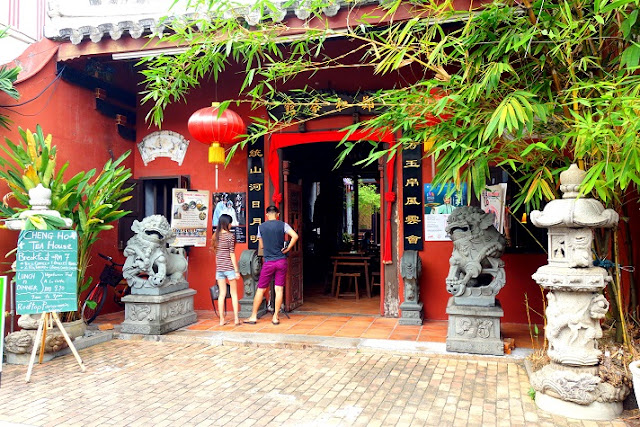 I found a perfect place, by chance to take some time off to chill and relax along Jalan Tukang Besi  after some walking . I was drawn by the very pretty Chinese looking exterior that reminded me of the mansions and palaces I visited in Beijing when I was there... 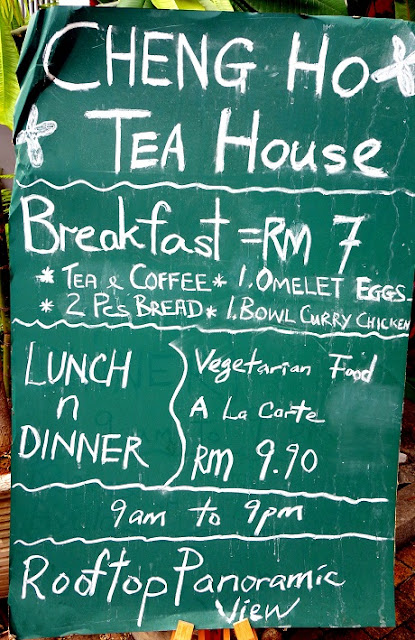 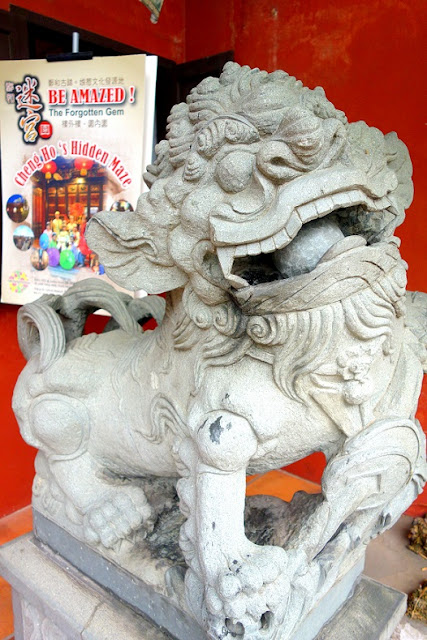 This was actually a Chinese teahouse which was a real tranquil haven from the crowd along Jonker Street in Melaka. . 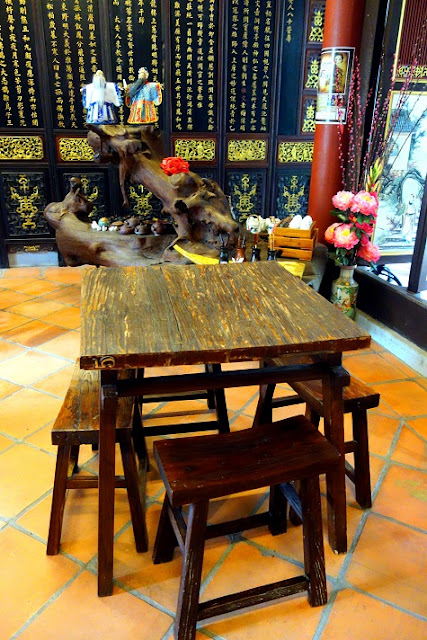 It resembles a high official’s Chinese garden courtyard. There are beautifully inscribed Chinese calligraphy on wooden walls as well as lovely  Chinese carvings that bring you back to those ancient times…. 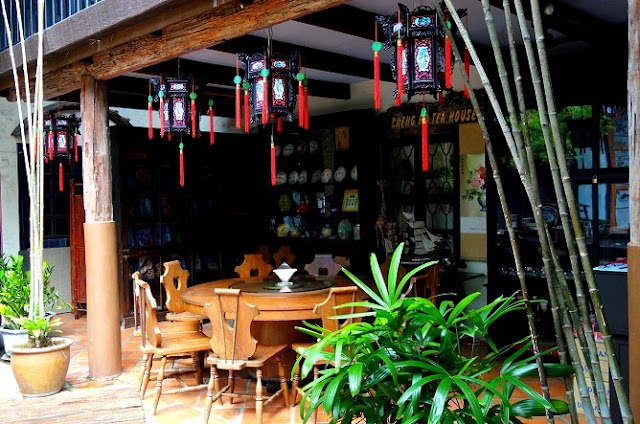 I know I was in love with this gorgeous peace of haven away from the bustling crowd... it was so well kept and beautiful... 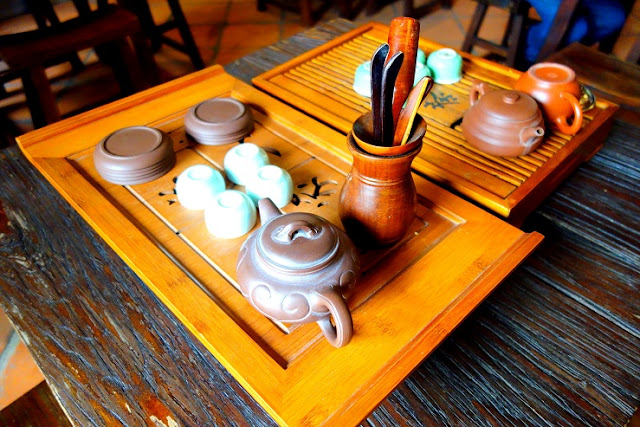 Apparently it is here they serve vegetarian food as well as tea. I was there early in the morning and so we decided to have breakfast which was served at a very affordable price of just RM7!!  And for that RM7 , they serve you with two slices of bread, scrambled eggs and a small bowl of 'chicken' curry..(in which actually there are potatoes and taupok - this is a vegetarian place!!!)

And frankly, I heard the tea serving ceremony here is only about RM15-20 which is super affordable in comparison with one I had with my daughter in the Summer Palace that really shocked us... We paid about RM60 for that... and the venue was not even this picturesque... 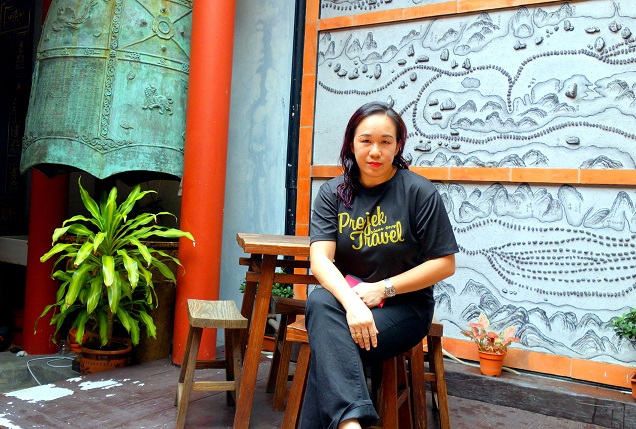 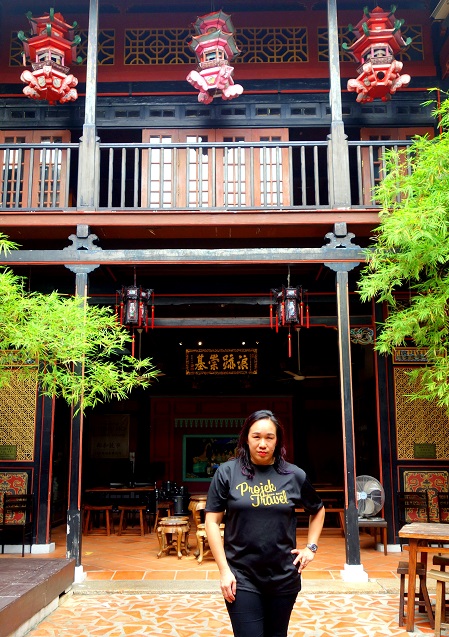 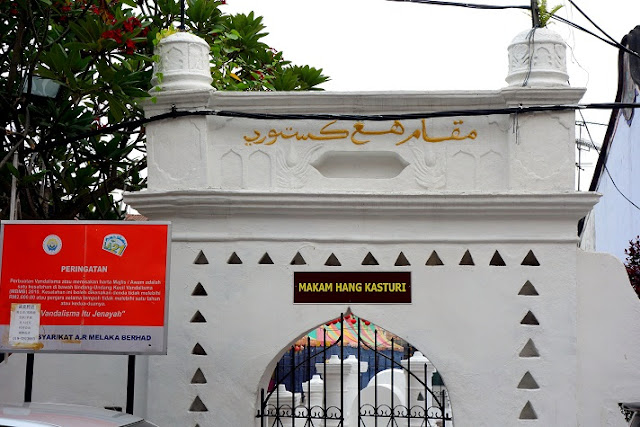 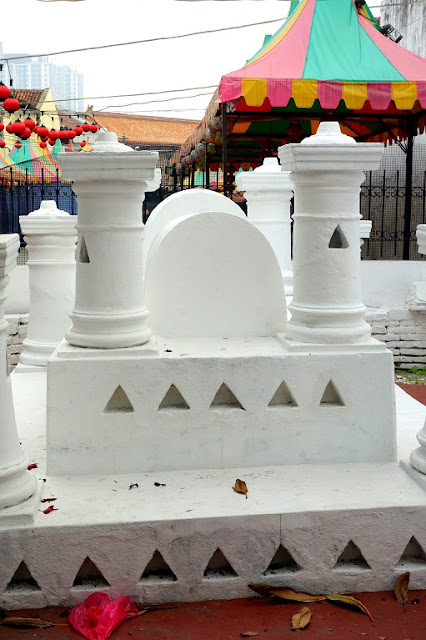 Hang Kasturi was said to be ordered to kill his sworn-brother Hang Tuah who had been accused of violating some of the Sultan's maids. Hang Tuah, however, killed Hang Kasturi after he found out about this plan. He also killed Hang Jebat who was the real traitor. 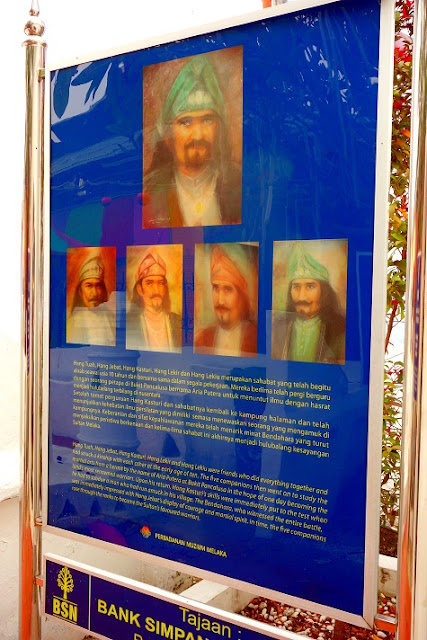 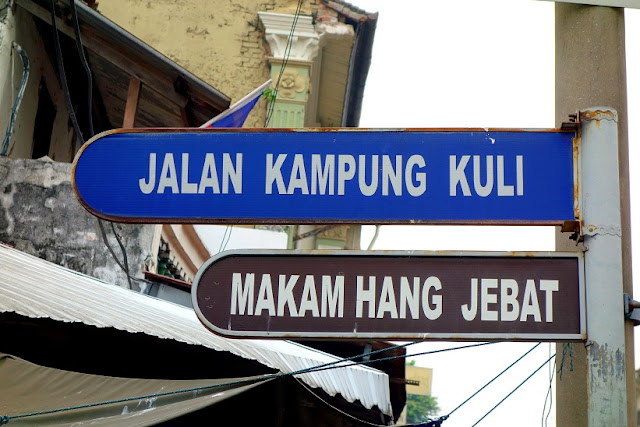 This is the grave of Hang Jebat, a high-ranking Malay warrior during the rule of Sultan Mansor Shah (r. 1456-77).  Story is he was appointed to a high position after Hang Tuah, his predecessor and sworn-brother, was wrongfully accused of having an affair with one of the King's maids. But instead of just accepting his position, Hang Jebat rose to Hang Tuah's defense and exclaimed "A fair rajah is to be revered, but a cruel rajah is to be despised." These words made the Sultan furious, who the ordered Hang Jebat executed.

I know it does not coincide with the story at Hang Kasturi's grave but well... only they really know what happened back then....I was not there, so I wouldn't know.... 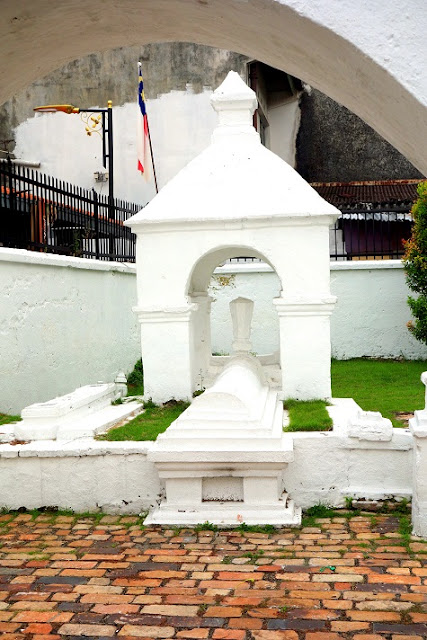 The very next day, Hang Tuah fulfilled his king's orders and killed Hang Jebat. According to legend, this is his grave site. 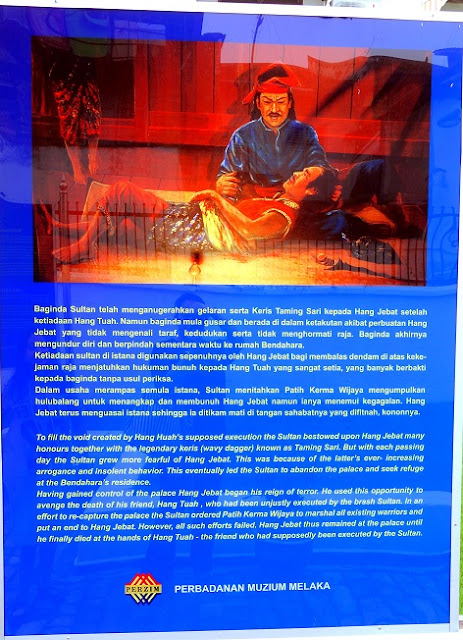 Situated at Jalan Kampung Kuli and flanked by shop houses, Hang Jebat Mausoleum (also known as Makam Hang Jebat) is believed to be an old burial grave for the Malay warrior, Hang Jebat. The Acehnese design of the grave is a typical custom used to mark the burial places of high ranked ministers or Sultans during the period of Melaka Sultanate . The age of the grave remains unknown but it predates 1511, before the Portuguese invasion. Hang Jebat Mausoleum houses the tomb of Hang Jebat and surrounded by a few more unnamed old tombs