Live Unplanned with the New Samsung Galaxy A Series 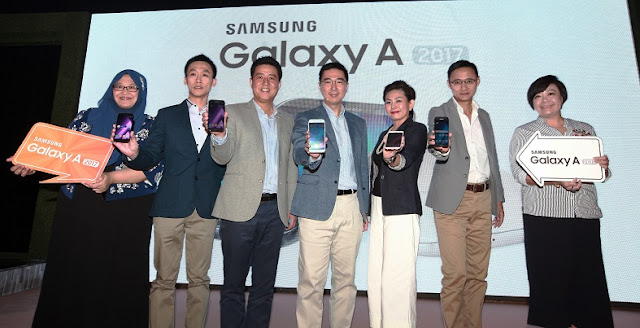 Yours truly was over at Aloft to check out the Samsung Galaxy A series media launch and was surprised to enter a beautiful ballroom converted into a glamping site instead as Samsung Malaysia Electronics introduces two addition to its latest Galaxy A Series (2017) range, the Galaxy A5 (2017) and Galaxy A7 (2017)!

The Galaxy A5 (2017) and Galaxy A7 (2017) are the latest additions to the Malaysian market and they complement the needs of connected millennials who crave spontaneity and seek life’s pleasures in the most fulfilling way. And what I am impressed with and what I like most would be for the first time ever in the Galaxy A Series these gorgeous babies are dust and water resistant ...

These powerful devices also come equipped with enhanced 16MP front and rear camera with f1.9 lens and Light+ Camera feature for sharper images and beautiful shots even in lowlight or at night – an incredibly handy feature when you least expect it, and something I REALLY NEED....

Selfie queens and kings would also be delighted to know that the Galaxy A Series (2017) has a Floating Camera Button which can be moved freely to anywhere on the screen for even more convenience with selfies!

These smartphones also boasts vivid Full HD 5.7-inch and 5.2-inch Super AMOLED screen displays – perfect for immersive gaming on the go or even binge-watching k-dramas or k-pop videos on YouTube! All you need to do is just whip out your Galaxy A Series (2017) and enjoy the flagship-like immersive experience and performance!

The Galaxy A Series (2017) is also equipped with Samsung Pay, a new alternative for making purchases at places where credit, debit and prepaid cards are accepted. It is an easy-to-use and secure mobile payment service compatible with NFC (Near Field Communication) and MST (Magnetic Secure Transmission) terminals. Samsung Pay is currently performing an open beta test for selected Maybank Visa cardholders, with more banks such as CIMB Mastercard, Citibank Mastercard & Visa, Standard Chartered Mastercard & Visa to be made available soon.

The devices also come preloaded with mySamsung, Samsung’s own mobile app that helps users set up, manage and optimise their Samsung experience and stay updated with the latest Samsung offers and promotions.

Another app to look out for is Samsung Milk Music, a downloadable app for Samsung users only that offers access to a wide range of personalised curated stations so users can listen to all their favourite music right from their Galaxy A devices! Other amazing features of the new Galaxy A Series (2017) include bigger batteries (3,600mAh for A7 and 3,000mAh for A5), Fast-Charging capabilities, expandable storage up to 256GB, Always-On Display, Secure Folder and Samsung Cloud for added convenience.

If you would like to be the first to own the new Galaxy A Series (2017), head over to selected Samsung outlets from 6th to 15th January 2017 to place your order and receive a complimentary Samsung Level U Pro wireless headphones worth RM399.

Pre-order collection will start on 25th January 2017. For online pre-orders, check out Samsung’s online stores on Lazada at http://lzd.co/samsung-galaxy-a-series and 11street at http://promotion.11street.my/store/samsung.

For more information on the pre-order, please visit http://www.samsung.com/my/A2017preorder.