I am so thrilled and I cannot wait for 29th July 2017.... it has already been marked in my organizer/ diary.. Though this would be the first year my daughter who is also my partner in crime and I join what is dubbed the world’s most popular nocturnal fun run....

Yup... You guessed it right... The ELECTRIC RUN is all set to light up the city again as AmMetLife ELECTRIC RUN RECHARGED happens at Anjung Floria, Precinct 4, Putrajaya.

Participants will be experiencing an exclusive journey of light and sound through time, with various zones, each representing unique colour themes and music era, making it the most electrifying experience you can ever enjoy....

Elevating the experience, AmMetLife ELECTRIC RUN RECHARGED is bringing Hip Hop artiste Silento down to Malaysia for the night to make his debut performance in Malaysia. Best known for his debut single "Watch Me" which racked up close to 1.3 billion views on Youtube and peaked at No. 3 on the Billboard Hot 100, Silento will be headlining the celebration at the finish line. My mini me was so excited to learn that he was going to be here in Malaysia for the AmMetLife ELECTRIC RUN RECHARGED... 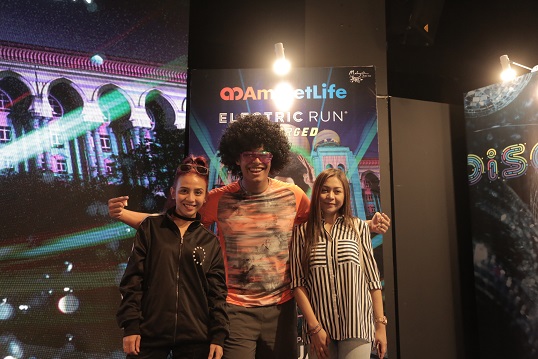 There will also be a whole load of local artistes such as CUURLEY, Blastique & Amanda Avyanna, SonaOne and De Fam so expect it to be one of the most memorable nights of your 2017..

This is because this time, all the participants at AmMetLife ELECTRIC RUN RECHARGED will each be receiving a limited edition PIX Mob bracelet (you know the one the got at the Coldplay concert...) in addition to the official race tee, finisher’s medal and race bib. So get ready to feel the beat as the pulsating light from the bracelet illuminate neon lights to guide participants to the themed dance party zones, accompanied by music every kilometre of the run, providing runners with a truly immersive experience.

Registrations can be done via www.electricrun.my or through their ticketing partner http://www.galactix.asia/electricrunmy-2017.