Gong Xi (恭禧) is congratulations or respectfully wishing one joy

Fa Cai (發財) is to become rich or to make money.

Thus, Gong Xi Fa Cai means wishing you to be prosperous in the coming year.

Where does “yee sang” come from?

According to Wikipedia, eating Yee Sang during Chinese New Year is a cultural activity for Chinese living in Singapore and Malaysia, but not so heard of in other Chinese-populated countries such as Hong Kong. The origins of the dish, was created by 4 master chefs in a Singapore restaurant kitchen way back in 1964, which was then still part of Malaysia. It made its debut during Lunar New Year of 1964 in Singapore's Lai Wah Restaurant (Established in Sept. 1963) as a symbol of prosperity and good health amongst the Chinese
In the 1970s, Lai Wah Restaurant started the modern-day method of serving Yee Sang with a pre-mixed special sauce comprising plum sauce, rice vinegar, kumquat paste and sesame oil concocted sauce.
So what does the ingredients mean.... Each ingredient has a symbolic role in wishing good fortunes to ourselves and our family and friends, so know what you are tossing this year as you wish for abundance of all things good....

Raw Fish for abundance
Lime for a smooth year ahead
White Radish for a successful business year ahead
Sesame to encourage a prosperous business to grow
Pomelo for good luck
Carrots for prosperity
Green Radish for youth everlasting
Golden Pillows/Crackers to symbolize a floor full of gold
Plum Sauce for a sweet life
Peanuts signifies a home with gold and silver
Pepper and Five Spice to attract wealth....

Why are lion and dragon dances performed and what do they represent? 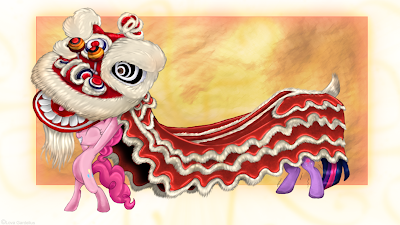 The Chinese use Lion and Dragon dancers as a symbol of auspiciousness to mark key dates such as Chinese New Year or the opening of a new business premises. There are a number of meanings for this that equates the Lion and Dragon dance to good Feng Shui:
These are the reasons the Dragon and Lion Dance are such an integral part of Chinese Culture for over thousands of years.

Although it is thought to date back to the Ch’in and Han Dynasties (c. 300BC,) the true origins of the Chinese Lion Dance are a mystery.  One popular legend tells of a monk (or, in some versions of the story, an emperor) who dreamed that China was about to be plagued by many evils. On waking up, he prayed  to the gods for a way to avert the coming catastrophe, and was rewarded with a vision of a lion. Because the monk had never seen or heard of a lion before, he created his own from many other mythical creatures including the dragon and unicorn. This might explain why the ‘lions’ used in the dance don’t look like any real living lions!

Another, slightly more realistic, fable would be of an incident that happened during the reign of the Jade Emperor. In this story the lion was a gift to the Emperor from a visiting Persian envoy. The Emperor was enchanted with the exotic animal but unfortunately could not tame its aggression. At the Emperor’s bidding many people tried to calm and control the lion, but all failed. In the end, it was a wise and peaceful monk who eventually managed to pacify the savage beast. Proud of his new pet, the emperor displayed the lion all around the country to his incredulous subjects. Stories of the amazing animal spread, with the lion becoming more magical and less realistic with each and every telling. In time, the colourful and bizarre looking costumes of the lion dance emerged, a world away from their African namesakes. The monk who tamed (or created) the lion is often an accompanying character in Lion Dances today.

A typical Lion Dance there will be at least four practitioners present. Two will form the head and body of the Lion. The additional practitioners will provide music. It's common for there to be several musicians including a drummer, cymbals and gongs. If the Lion Dancers are from a reputable source, they will be able to use a range of musical accompaniments, with varying beats, rhythms and tempos and will also be able to perform acrobatic feats such as jumping on and across pillars. The less skilled will know just the standard beat. 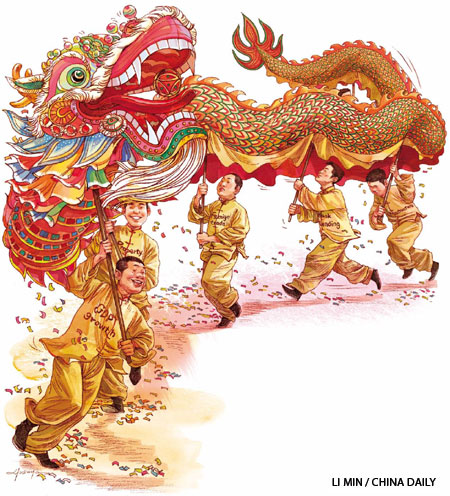 The Dragon Dance is said to have originated during the Chinese Han Dynasty dating from 180-230 A.D.  The presence of the dragon scares away evil sprits and attracts wealth, health and wisdom.

The dragon is a helpful and friendly creature who symbolizes courage, good luck, power, dignity, wisdom and long life, to name just a few of his many noble characteristics.  The Chinese dragon is an amphibious creature, that can swim through water, fly through the air or travel on land.

A dance dragon consists of three main parts:  the head or mask, a long body, and a tail.  The dragon is often seen chasing a pearl of wisdom.  This chase symbolizes the dragon’s search for wisdom and knowledge.

Dragons come in an assortment of lengths, but a typical dance dragon is about 112 feet long and consists of about 9 dancers.  It is thought that the longer the dragon, the more luck he brings with him.  The dragon is accompanied by drums, cymbals and gongs.  Symbolically, the noise from these instruments helps to scare away evil spirits.  However, the drums also plays an important role in helping the dancers to time their performance.  A dragon dance requires lots of skill and teamwork on the part of its members.

Happy Prosperous Chinese New Year to everyone and Gong Xi Fa Cai... May you all be overwhelmed with all the good things coming your way this year.... It's a 'Goat' (Good) year 'Kambing' (Goat in Malay language/ rhymes with Coming) our way!!!!

Resources and pictures from google.com and various sites....just for sharing purposes...