Yours truly here was blessed to be able to attend Cesar Millan Live : Love Your Dogs Tour press conference recently at the Mandarin Oriental and meet up with the amazing Dog Whisperer himself.... 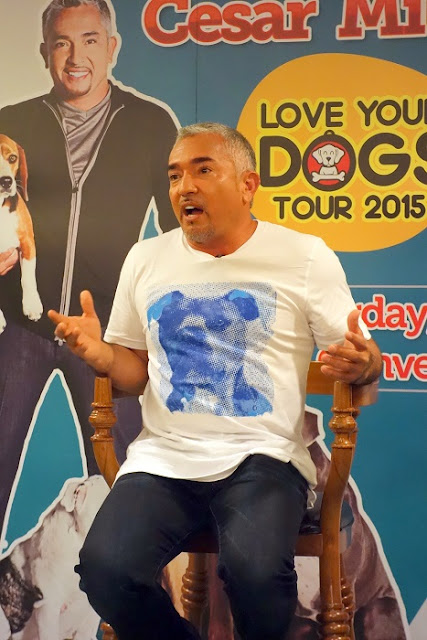 Brought to Malaysia by PR Worldwide, Cesar Millan Live: Love Your Dogs Tour took place at the Plenary Hall at the Kuala Lumpur Convention Centre on May 30 but sadly,I missed out on it.. as I had something else on which I could not get out of.

Cesar Millan is really friendly and nice. If you do not know who he is, which rock or cave have you crawled out from.... hehehe, no offence meant, but Cesar is pretty well known for his TV series Dog Whisperer With Cesar Millan  and also Cesar to the Rescue on Nat Geo (Astro channel 553)besides being the chosen dog trainer for famous icons like Oprah Winfrey, Charlize Theron, Nicolas Cage, Ridley Scott, Jennifer Aniston.
Cesar is well known for his amazing ability for helping dogs and teaching his viewers how to handle dog behavioural problems. 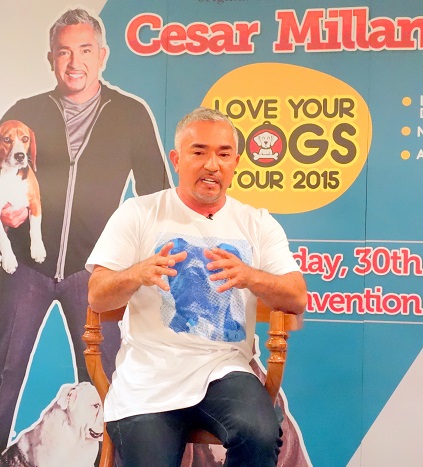 Cesar was very open and easy going, willingly sharing with the rapt members of the media tips on shaping dog and human behaviour, identifying dog behavior and how to read your dog’s body language to prevent and resolve behaviour problems.
Cesar  stresses that dogs are not the one that causes problems, but rather humans who badly misunderstand them. 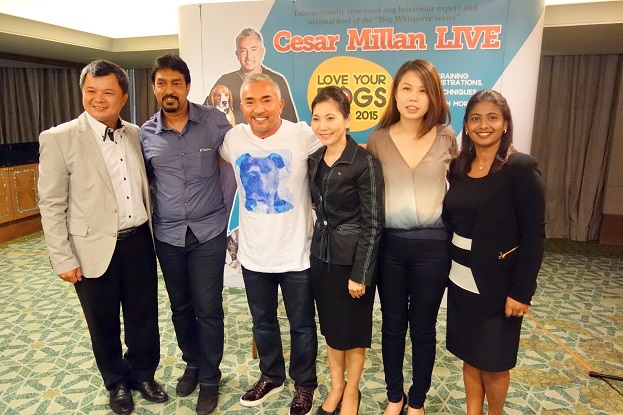 “A dog is a teacher in life, and I’d rather have a balanced dog than a trained dog,” he quoted. Having worked with so many dog owners from world leaders of the world to celebrities, he said trust and respect is the foundation of any man-dog relationship, and well, we must be willing to gain the dog's trust and respect before we receive it back from them.....
He recalls his experience working with TV personality Oprah Winfrey. “Oprah’s dog , a cocker spaniel called Sophie, was biting her other dogs. It was so bad that she had to have doors closed (in certain areas) so that Sophie will not attack her other dogs. Imagine that. Oprah could not find balance at home because of her dogs.” Cesar said when he was at her home, he immediately noticed the change in Oprah’s energy.

“Oprah is usually calm, but faced with that situation, her assertiveness became fear. So what I did was to change the energy - the one Sophie was receiving at that moment. After 15 minutes, all was fine.” He explained: “Dogs live in the moment – that’s what we need to understand. Dogs don’t hold on to the past unless we remind them and make them hold on to the past by feeling sorry for them. It’s the same thing for us human. When we have problems, we do not want people feeling sorry for us.” 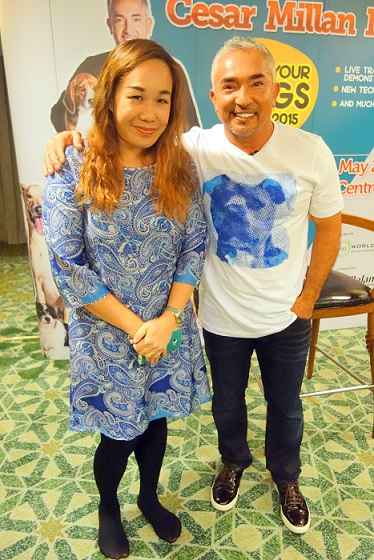 Cesar Millan also owns a two-acre Dog Psychology Center in Los Angeles which specialises in working with large breed dogs as well as another in Santa Clarita (California).
Cesar has also co written six books, including Cesar’s Way, Be the Pack Leader, How to Raise the Perfect Dog and Cesar’s Rules. “I believe if you can learn how to reconnect with your own instincts and know how your own energy can affect your dog, we can have an having a great relationship with your dogs is possible.”
For more interesting events from PR Worldwide, follow/like their FB now: https://www.facebook.com/PRWorldwide
Like Cesar Millan's FB too, to follow him...:https://www.facebook.com/cesar.millan

Thank you PR Worldwide, Anita and Kavita for this unforgettable opportunity to meet Cesar.....