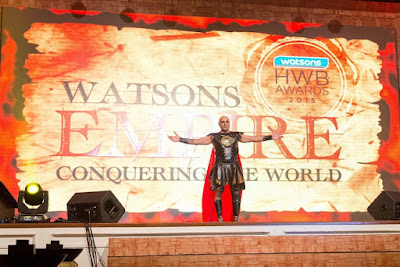 Attended by over 500 Watsons’ suppliers in the country, the HWB Award 2015 gala dinner is a highly anticipated annual event which celebrates the close and successful collaboration throughout the year between Watsons and its esteemed suppliers.

The event was hosted by TV Host, Emcee & Fitness Enthusiast, Hansen Lee where Watsons team organized a fun filled night weaving the ‘conquering the world’ concept. Bringing the Roman Empire to life, guests were treated with fun engagement games at the registration area to win Watsons brands products. In addition to that, Watsons gave away three (3) Apple Watch Sport to lucky draw winners and the best selfie of the night with the #watsonsempire on Instagram. The Watsons Empire theme was selected to show Watsons’ long standing legacy in Malaysia and to envision Watsons’ suppliers to be the country’s choice of health and beauty retailer by ruling over vast lands with increased retail presence, and conquering the market.

“We recognise successful business is done through collaboration and great ideas with our suppliers. These are the values which we pride ourselves with to continuously drive greater success in building sales and brand presence. And every year, Watsons will recognize and reward those business partners that have given their invaluable support and loyalty towards Watsons as our mean of appreciation,” said Kulvinder Birring, Managing Director of Watsons Malaysia in his opening speech.

With emerging retail brands and economic volatility, the retail business has been very competitive. Adding to that, customers have slowly shifted their attention to the digital platform especially with the advancement of social media platforms available at Watsons.

“We have begun to feel the impact of e-commerce and our interaction with the customers must change so that Watsons become more relevant,” Birring added. 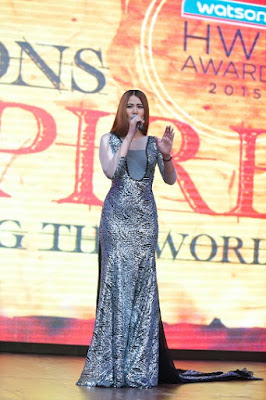 Highlights of the Awards gala night included the opening performance by Venus Show followed by award-winning performances from singing sensation, Dewi Liana, Miss World Malaysia 2014 as well as 4 times Guinness World Record Holder, Donovan and Rebecca who mesmerize the crowd with their vocal and acrobatic act. Dewi was the winner of Miss Talent at Miss World 2014, the first Malaysian to receive such recognition while Donovan and Rebecca were featured on America’s Got Talent and British Got Talent.

Running for the tenth year consecutively, the HWB Award 2015 gave away 26 awards including two new awards namely Best eCommerce Support and Most Wanted Brand by Members where the winner was voted by Watsons VIP Card members.

The list of winners for Watsons Health, Wellness and Beauty (HWB) Awards are: 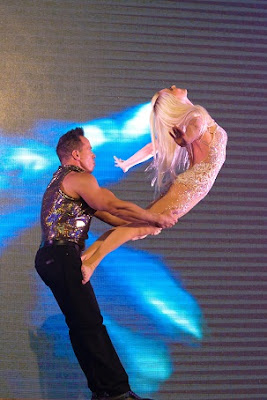