The Great Britain Festival in KL

I do not know about you, but Britain definitely has a place in my heart. I do love many British things.. and have crushes on British men (yup, it's not all Korean pretty boys only ya, I also have crushes on this more rugged British dudes... hahah)... ehem... Colin Firth, David Beckham, Henry Cavill, Stephen Moyer, Hugh Dancy to name a few.......

Most of my favorite clothing brands are from Britain.. errmm.. Marks and Spencers, Warehouse, River Island, Oasis, Dorothy Perkins....and yes, I have been to Britain twice.. once as a kid, and again in my twenties... I would so love another chance to head back to Britain, one fine day if  can save that much moolah... 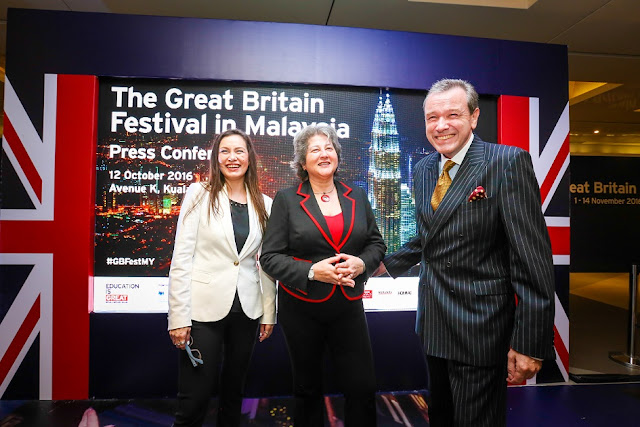 But anyway, I am delighted and thrilled to be able to indulge in some British stuff as Britain goes all out to engage us with a series of events here in Malaysia, at Avenue K Mall in Kuala Lumpur.

The exciting line up kicks off with a flypast over the Petronas Twin Towers by the British Royal Air Force aerobatic team The Red Arrows, and ends with two international conference events, namely BETT Asia Leadership Summit & Expo and Wilton Park Education Dialogue in Kuala Lumpur. 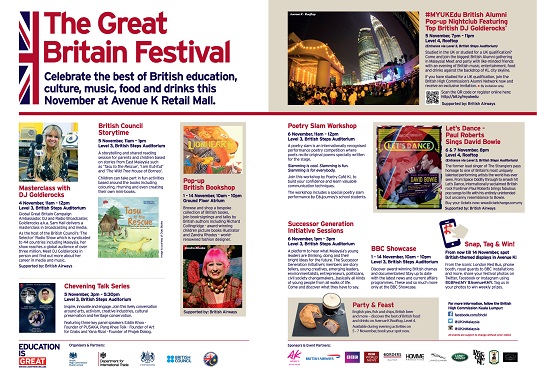 There will also be The GREAT Britain Festival which will see a host of activities in Avenue K Mall in Kuala Lumpur, including the #MYUKEdu British Alumni Pop-up Night Club featuring British celebrity DJ Goldierocks, a UK Education Fair and a David Bowie tribute performance by Paul Roberts as the legendary British musician.

Her Excellency Vicki Treadell CMG MVO, the British High Commissioner to Malaysia, gave guest present a preview of the exciting line up of events at a press conference today.

The events are organised by the British High Commission Kuala Lumpur in collaboration with the UK Department for International Trade, British Council, Avenue K and Homme Productions among others. Information of the individual events will be available on the High Commission’s website and social media channels.

14 Oct 2016
Lucky members of the public would have  caught sight of the Red Arrows and a Typhoon aircraft in a spectacular flypast over the Petronas Twin Towers yesterday, Fri 14 Oct 2016 (3.45pm).

While in Malaysia, the Red Arrows will also help launch a school’s STEM (Science, Technology, Engineering and Mathematics) project that is organised in conjunction with Heriot Watt University.  Red Arrows engineers will be giving a series of school talks about their careers working on some of the most sophisticated kit in the world.  STEM students will be invited to the Red Arrows aerobatic display at Epsom College.

1 – 14 Nov 2016
The GREAT Britain Festival (#GBFestMY) will run from 1–14 Nov 2016 at the Avenue K mall in Kuala Lumpur. There will be a pop-up British bookstore run by Borders. New author and illustrator Richard Collingridge whose children’s picture books ‘When It Snows’ and ‘Lionheart’ have been shortlisted for awards, will be in the Avenue K Mall for author signings and talks. The British Council will be holding story telling sessions on Sat 5 Nov at the British Steps Auditorium on Level 3 in the Avenue K Mall (11am-1pm). Sponsor Jaguar Land Rover will display their cars at Avenue K too.  In addition, BBC will have a showcase on Level 3 featuring award-winning British dramas, documentaries and news programmes.

4 Nov 2016
Celebrity DJ Goldierocks will be giving a Masterclass ‘Women in Media’ at the British Steps Auditorium in Avenue K (11am-12pm). 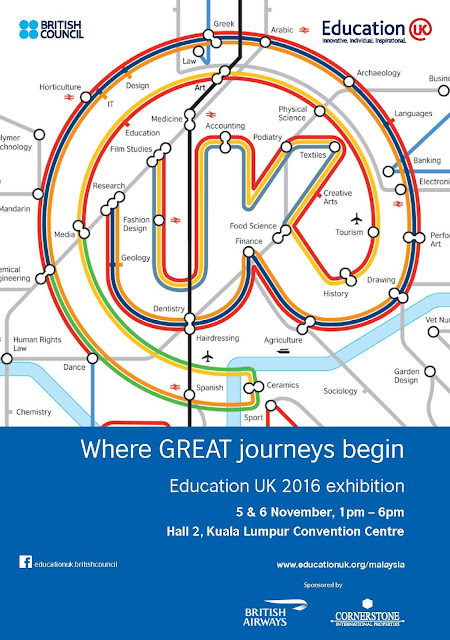 5 – 6 Nov 2016
The British Council will be holding their Education UK University Fair (featuring around 80 UK universities) at the KLCC Conference Centre. This is a great opportunity to find out more about studying in the UK and meeting the different UK universities and learning about the different undergraduate degrees and master programmes that are available.

6 Nov 2016
The Poetry Slam Workshop will take place at the British Steps Auditorium in Avenue K (11am-12pm). A poetry slam is an internationally recognised performance poetry competition where poets recite original poems specially written for the stage. Poetry Slams can feature a broad range of voices, styles, cultural traditions, and approaches to writing and performance. Slam poetry combines writing with drama, presentation and public speaking, to make poetry dynamic, accessible and fun. The skills developed by writing and performing poetry are valuable communication techniques, essential in all areas of life – building confidence and self esteem. This workshop will include a special poetry slam performance by a group of secondary school students from Edujourney - a private school based in Kuala Lumpur. 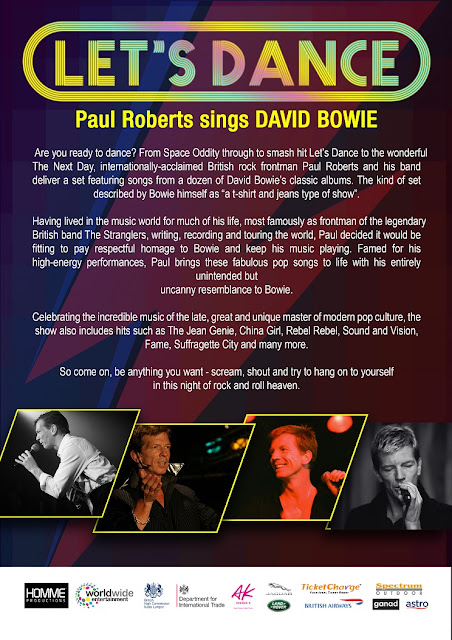 6 & 7 Nov 2016
"Let's Dance - Paul Roberts Sings David Bowie", brought to you by HOMME Productions in association with the British producer Worldwide Entertainment, will be presented on the rooftop of the Avenue K Mall. From the classic "Space Oddity" to the wonderful "The Next Day” to the smash hit "Let’s Dance", the internationally-acclaimed former lead singer of "The Stranglers" British Paul Roberts and his band will pay homage to the late great David Bowie and deliver a set of songs from across the classic albums of Bowie. Celebrating the incredible music of this unique master of modern pop music and culture, the show will include hits, such as "Ziggy Stardust", "The Jean Genie", "China Girl", "Rebel Rebel", "Sound and Vision", "Fame", "Suffragette City", and many more.
Tickets cost RM100.  Purchase from www.ticketcharge.com.my  Hotline: +603-9222 8811

15 – 16 Nov 2016
BETT Asia, the region’s most important education gathering, will take place at the Mandarin Oriental Kuala Lumpur. Supported by Malaysia’s Ministry of Education and part of the British Government’s Education is GREAT campaign, the third edition of BETT Asia will be bringing an even bigger Expo alongside its renowned Leadership Summit. Over 1,500 influential policy-makers, education leaders and educators from across the region will unite to discuss and discover the latest trends, challenges and advancements in education technology and innovation across the world with a distinct focus on Asia.

16 – 17 Nov 2016
Wilton Park is organising an education thought leadership dialogue ‘The Future of Education in Asia: Harnessing Innovation for Partnerships’. The Wilton Park dialogue will bring together 40 – 50 education thought leaders from across ASEAN for an interactive discussion on how countries can best prepare the next generation of students for the future workplace.

So there you have it.. be sure to check out these awesome British offerings....