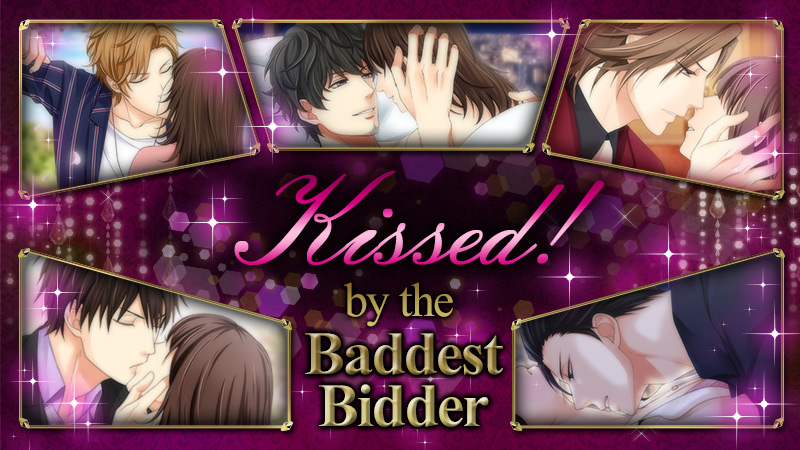 In a large showroom, you are on stage inside a bird cage and are being auctioned off, the numbers in millions...
Before this all happened, you were just working as a hotel maid at Hotel Tres Spades, a casino and hotel located in Japan that is owned by the Ichinomiya Group. You and your coworker and close friend, Sakiko chat amiably about the VIP convention that will be going on before heading for work.

At the hotel's lobby, there's a crowd of reporters and onlookers and then, rich and famous people start arriving. Sakiko then points out "The King" and you try to get a glimpse, you see that he's surrounded by very famous people. He is also a resident at the penthouse suite. You then learn that he is called Eisuke. Then, people started pushing through and end up knocking you over, you fall but Eisuke catches you. However, he just drops you on the floor, acts high and mighty and leaves without a care.
You then get scolded by Erika, the VIP maid, for being embarrassing in front of Eisuke. Eventually, she orders you to deliver the special gift boxes to the VIPs. You do as you're told and head for the elevator when you see a man and a woman arguing, the woman throws her masquerade mask at the floor and breaks up with the man. The man however, is not shaken by the turn of events and simply comments on how he doesn't have a date now. He looks up and your eyes meet, you try to avoid it but he ends up talking to you and drags you into the elevator with him.
The man flirts with you a bit and even lifts your chin towards his face. The elevator arrives at the VIP party. You're dazzled by the rich and famous and you don't realize that the man who brought you here is gone. You try looking for him when someone calls out to you - Ota Kisaki.
You apologize for your rudeness and proceed to fetch him a drink when he laughs at you because you looked like Alice in Wonderland, completely dazzled by the place. He then leaves. You try to leave when a sleazy man grabs your arm and starts to act creepy and puts his arm around your waist when Eisuke arrives. He harshly tells you two to move and you both do as you're told. The creepy man apologizes in fear and calls Eisuke "Mister Ichinomiya" and runs away. It turns out, Eisuke's the owner of the hotel.
Eisuke walks off and women in tow when you notice a white glove on the floor. You pick it up and try to give it back to him.
Following him leads you to a hallway with several doors and you're looking for the one Eisuke went into. You notice a large door that's slightly opened, you peek inside and see briefcases with money and guns. A man then roughly pulls your arm and corners you at the wall. The man asks why you're here, you tremble under his piercing gaze. He commands you forget what you saw or face death, you agree to do so and run away when he finally lets go.
You end up in a storage room and accidentally break a million dollar statue. This glass statue was a gift from the President of France to Japan and was stolen from a museum a few days ago. The men who saw doesn't accept your apology and use you as its replacement in the black market auction to be sold to one of the bidders in the audience.
One of them is the creepy man from the VIP party. However, you're sold to someone else for twenty million dollars. Your cage is then carried off the stage, you get out and two masked people come to retrieve you and take you to the penthouse in the hotel. It turns out, these people here, including Eisuke, had bought you. The guy who threaten to take your life, Soryu, is also there and is the boss of a Hong Kong Mafia. And so is Ota, the part time model and popular artist, and Baba the Thief. You then proclaim that you're a human and should not have been up for auction but you learn that this is a black market auction, with anything and everything imaginable could be sold and bought. You also learn that though illegal, Eisuke had approved of it.
They start to decide who buys you and you exclaim that you'll report this to police, only to be shown that there is an actual cop here. Though he is completely different from what you'd expect, he appears lazy and uninterested. He's actually a detective and he's called Mamoru.
The conversation between him and Ota isn't going anywhere so they decide to deal with you. Eisuke gives you an option to decide who buys you...
You can choose: Eisuke, Soryu, Baba, Ota or Mamoru. If you select Eisuke's route: Eisuke is the owner of the Tres Spades Hotel and also one of Japan's top corporations, the Ichinomiya Group. He is one of the founders of the secret auction. His card is the Ace of Hearts.
You have a hard time choosing and Eisuke ends up selecting himself instead. He picks you up and carries you over his shoulder. He walks up the stairs and Ota says that he's very impatient. Eisuke asks Ota if he plays with his stuff until they break and Ota replies that if he's very fond of it, he doesn't and would take good care of them. Eisuke says this is the same thing when you proclaim that you're not a toy. Eisuke shuts you up and reminds you coldly that you're not allowed to speak without permission. You freeze and he continues up the stairs. You then hear Soryu say that Eisuke can't be reasoned with once he's decided on something.
He takes you into a room and throws you onto the bed. You yell at him and ask what's wrong with and quickly clamp your mouth shut because you remember what he said. He coldly looks down on you and gives you two rules: no talking back and your replies are to simply be "yes" or "okay". You talk back and he reminds you that you're not allowed to and because he bought you, he can do anything he wants with you. You see that he's very handsome but his cruel smile is harsh and extremely penetrating. He then tells you to undress... 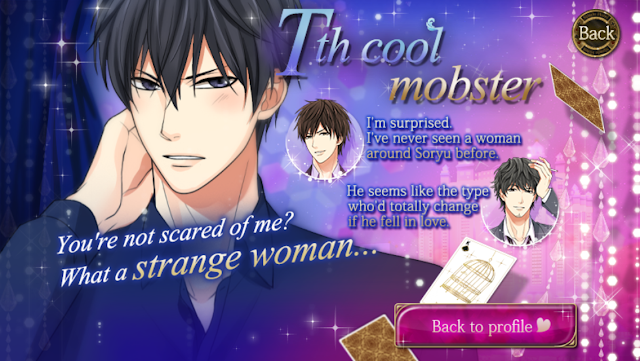 Soryu: Soryu is the second-in-command of the Ice Dragons, a powerful mafia organization from Hong Kong that was originally led by his grandfather. His card is the King of Spades. 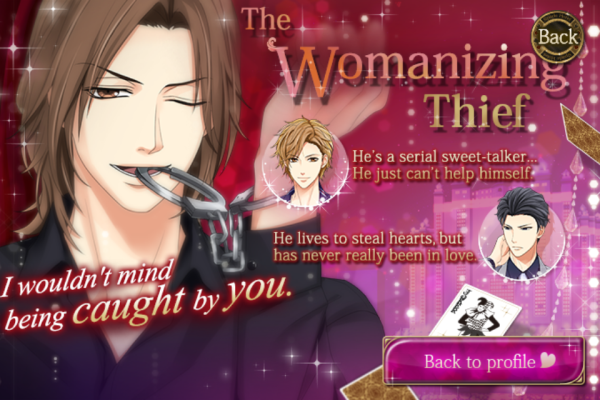 Baba: Baba is an infamous master thief. He is the oldest of the group and his card is the Joker. 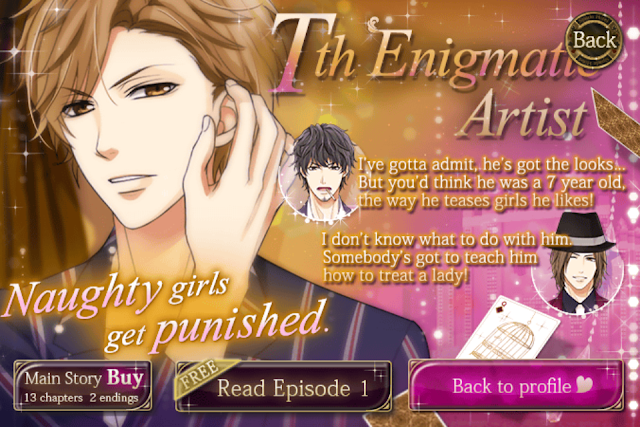 Ota: Ota is a famous artist and dubbed the "Angelic Artist" by the media. He is the youngest and his card is the Queen of Diamonds. Mamoru: Mamoru is the slacker detective. Eisuke bribed him into keeping the auctions a secret from the police. His card is the Jack of Clubs. Shuichi: Shuichi is the ambassador for the Japanese government and is in good terms with many famous celebrities and other important figures. He appears to be sinister and sly, but is actually very kind. He appears in the second season and his card is the Ace of Diamonds. 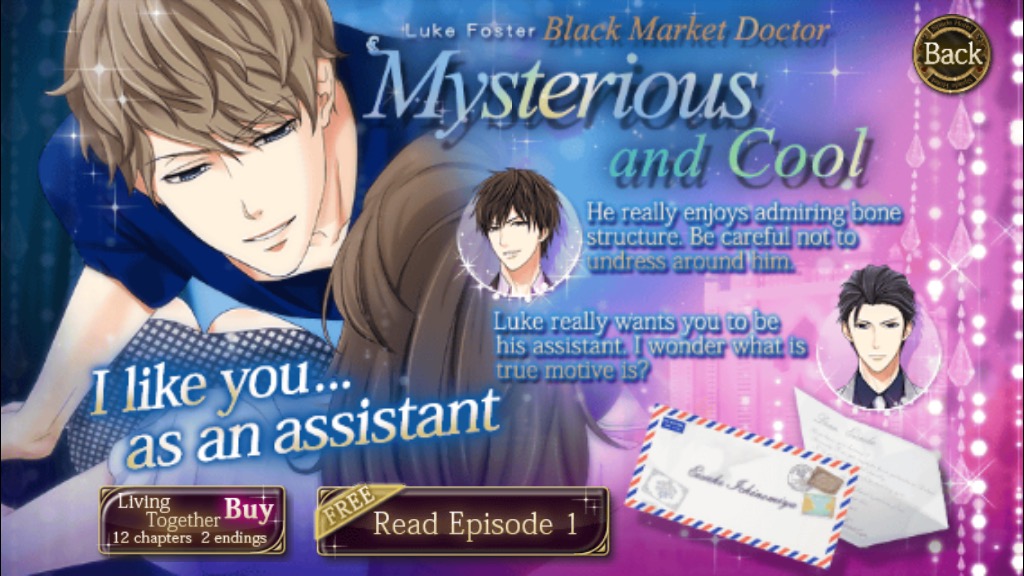 Luke Forster: Luke is a British black market doctor with a collarbone fetish and knows Eisuke and Soryu from a prestigious boarding school in England. He appears in season two.