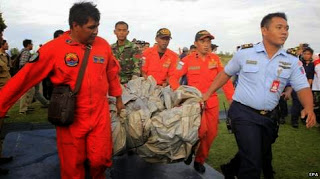 About 40 bodies have been recovered from the sea in the search for missing AirAsia Flight QZ8501.

The bodies were spotted along with debris floating in the Java Sea off the Indonesian part of Borneo, in one of the search zones for the plane.

The Airbus A320-200, with 162 people on board from Surabaya in Indonesia to Singapore, disappeared on Sunday.

The search operation is now in its third day, with the area widened to cover 13 zones over land and sea.

During a news conference by the head of the operation, shown live on Indonesian TV, pictures of the debris were shown including a body floating on the water.

The Indonesian navy later reported that 40 bodies had been retrieved by one warship and said the rescuers were continuing to recover bodies and were "very busy now".

Search operation head Bambang Soelistyo said he was 95% certain the objects shown were from the plane, and they have spotted a shadow under water which is the shape of a plane.

Ships with more sophisticated technology were being deployed to check whether larger parts of the plane were submerged beneath the debris.

Indonesian civil aviation chief Djoko Murjatmodjo, said things such as a passenger door and cargo door had been found.

He added that the objects had been found 160km (100 miles) south-west of Pangkalan Bun in Borneo's Central Kalimantan province. 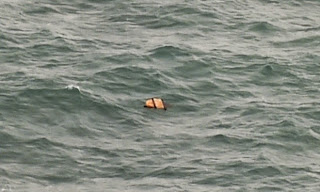 There are about 30 ships, 15 aircraft and seven helicopters in the search and rescue operation at 06:00 local time on Tuesday.

While it is a relief that they have found debris, bodies and possibly the plane, hours truly is sadden that it is in this manner and is still wishing for a miracle of some survivors being found.

My deepest condolences to all family and close friends of the Air Asia QZ8501, and may they be strong in this challenging and tragic moment...