Containing the most successful rides, slides, shows and attractions from LEGOLAND Parks around the world, LEGOLAND Malaysia Resort is tailor-made for the local environment. It covers the same area of more than 50 full size football pitches and contains approximately 15,000 LEGO models made from over 60 million LEGO bricks.

LEGOLAND Park was opened on 15 September 2012 and is a full day interactive family experience.

Yours truly and family was one of the few people who were very fortunate to get invited there recently by both LEGOLAND Malaysia Resort and also Wall's Paddle Pop Ice Cream.. come with me and see some of the great fun we had there.... 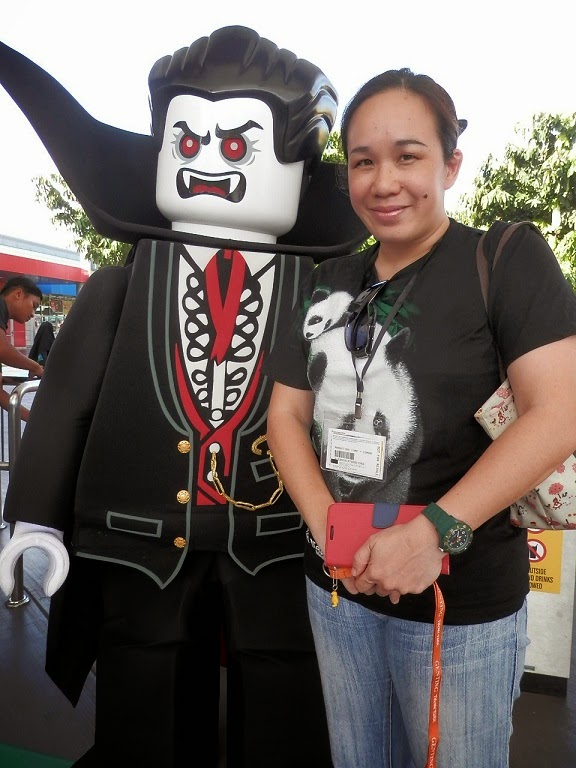 Families visiting for the day can choose between a Day Ticket to the Theme Park, the Water Park or Combo Tickets, which allows them to move freely between the two.

Before you start your adventure, do not forget to grab a copy of the map or consult the map on the board strategically located in various areas in the resort / theme park 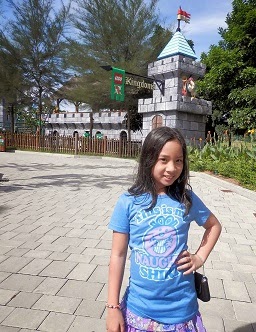 The Dragon roller coaster takes riders deep inside the royal castle on a journey into the Middle Ages. With two fire-breathing dragons to ride, up to 600 visitors each hour can take on its twists and turns.

The Dragon’s Apprentice offers younger guests a taste of what to expect when they are big and brave enough to ride The Dragon.

My little girl was brave enough to go for both and twice. It was definitely wild ... but I think yours truly's adrenaline was more from the running after her and climbing the stairs to get to the rides in a hurry. LOL


Other rides in this Kingdom area includes the tree-top adventure for children and their parents in the multi-level playground in The Forestman’s Hideout which slides and ropes are suitable for the entire family, Merlin’s Challenge which is a high speed carousel for parents and children. Its 24 cars can put 48 visitors at a time into a spin and the Royal Joust, which is a classic medieval contest, which puts children in the saddles of 20 LEGO® horses. 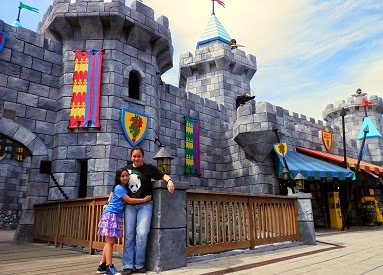 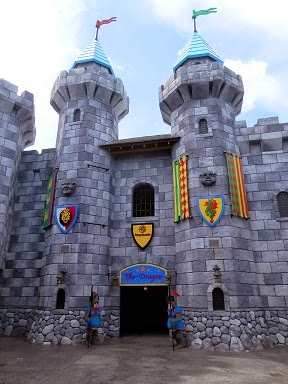 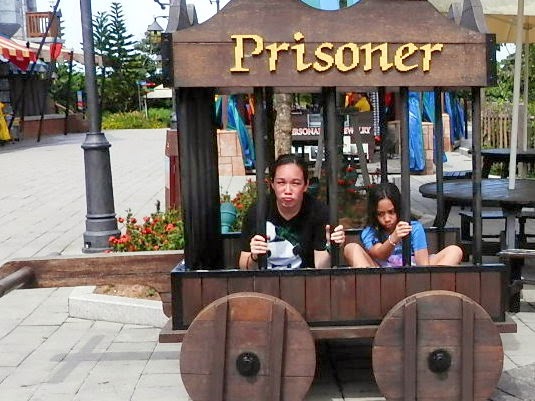 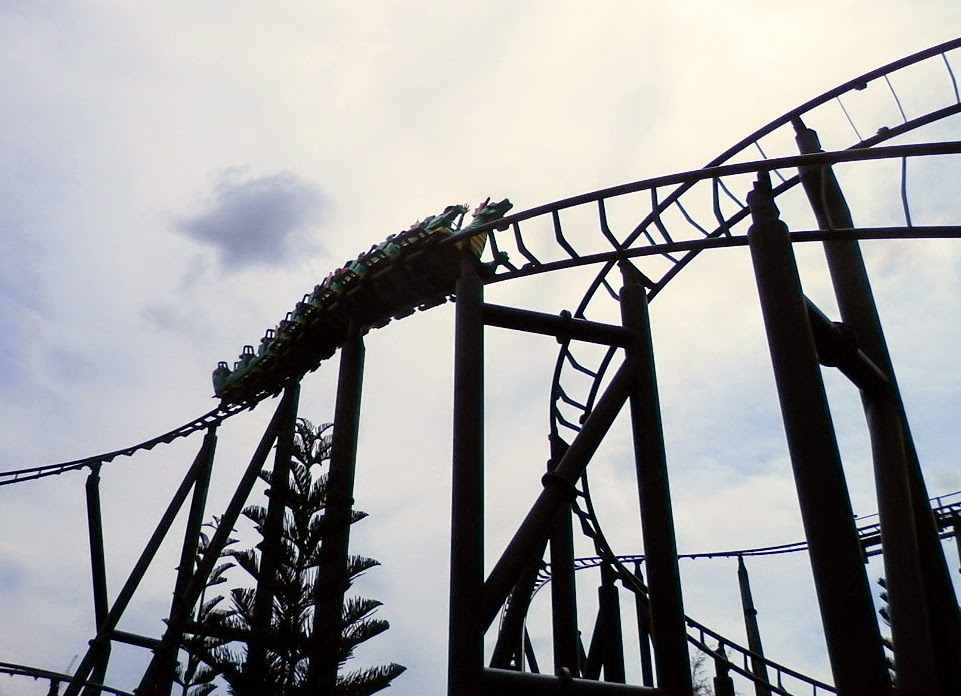 The miniature world of Miniland turns children into giants and is the centrepiece of every LEGOLAND® Park. Asia’s most famous countries, cities and landmarks are recreated on a scale of 1:20, using more than 30 million LEGO® bricks. 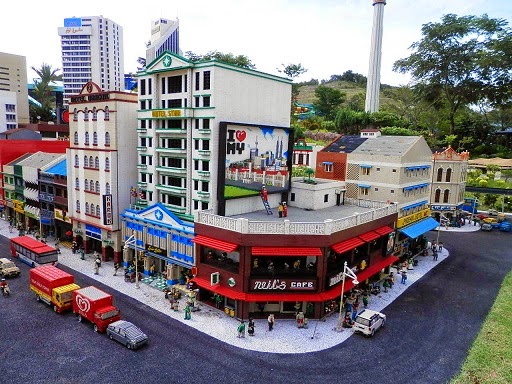 Miniland at LEGOLAND® Malaysia is the largest ever built for a new park, and the project took more than three years to complete. Many of the models are animated, so visitors can bring LEGO® figures, trains and airplanes to life at the touch of a button. 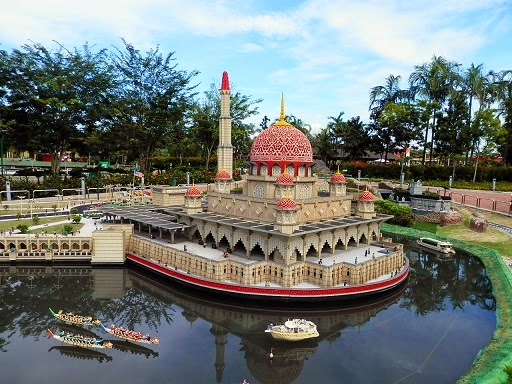 For more of the Miniland pictures, keep reading my blog, I will post them soon.... 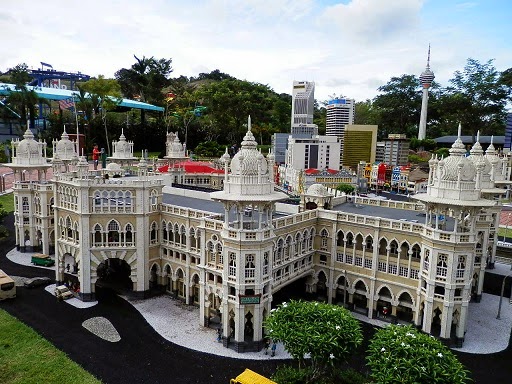 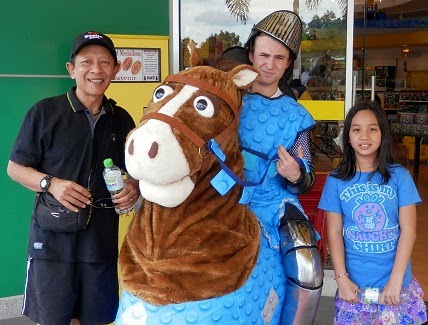 At the Build and Test Centre, LEGO® inventors can bring their imaginations to life. There are thousands of LEGO bricks for experimenting, testing, and building. Inventors can construct and race cars, and test their buildings on the earthquake table.

Young engine drivers, in particular, will love DUPLO® Express, a colourful five carriage train for ten passengers at a time. 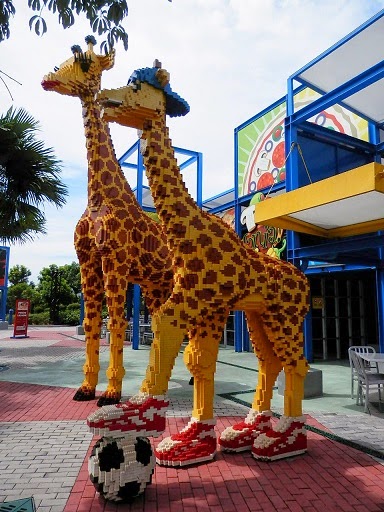 The Observation Tower can lift 1,000 visitors each hour to a viewing position 41m above the ground for an excellent aerial view of the Park.

Children can take over the town and explore their very own child-size city at DUPLO® Playtown.
The Kid’s Power Tower challenges 200 visitors per hour to test their strength by pulling their two-seat car up a nine metre rope. A beautiful view over the Park is the reward at the top.

500 people at a time can get right inside the action with a fascinating 4D movie adventure at LEGO® Studios, where wind, smoke and water take 3D into the next dimension.

My little girl and I were hosed down in the Studios when the LEGO characters lost control of their water hose which flew all over the place... and my little girl was shrieking with both faked annoyance and excitement. 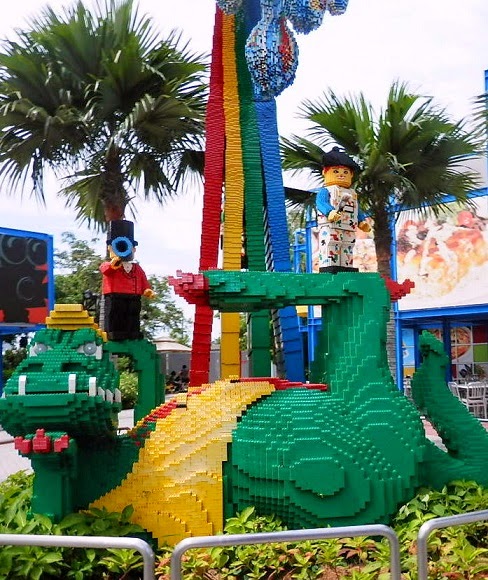 Dino Island takes visitors on a canoe voyage through a forgotten time. Explorers pass rocky outcrops, man-eating plants and a dinosaur lagoon. A twelve-metre high waterfall is the only way down, and there’s no escape without getting wet.

We went for that ride and it was amazing and a lot of fun... Do not miss out on that....

In Lost Kingdom everyone can play the role of an adventure hero in a laser-blasting hunt for hidden treasure. Almost 1,000 heroes each hour can board a desert off-roader and discover the secrets of the ancient temple. Using laser guns to shoot their way through a labyrinth, they must battle evil mummies and dodge deadly traps.

The Lost Kingdom was funny as we were a little "blur" at what we were suppose to shoot in the beginning.. but then it became exciting when we finally understood the target...

Beetle Bounce launches children up and down a 15 foot tower, nearly touching the gigantic LEGO® beetles that sit above with every bounce.

Young children create their own adventures in the Pharaoh’s Revenge play area. 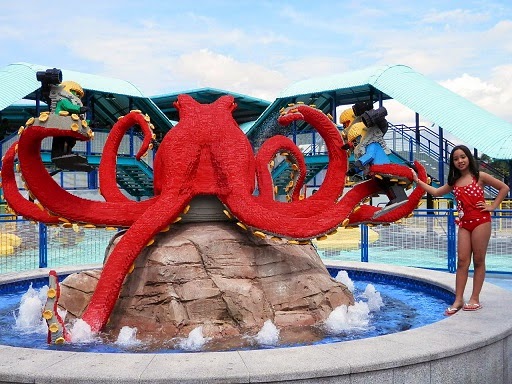 Teams of families race each other to put out the fire in the Rescue Academy. This is a worldwide LEGOLAND® favorite, where fire-fighters and police officers big and small power their trucks by pumping levers up and down.

Driving School offers children a unique chance to drive on a true-to-life traffic circuit. They have to steer their LEGO® cars past signs, traffic lights and other drivers to qualify for their very own license after learning the rules of the road. 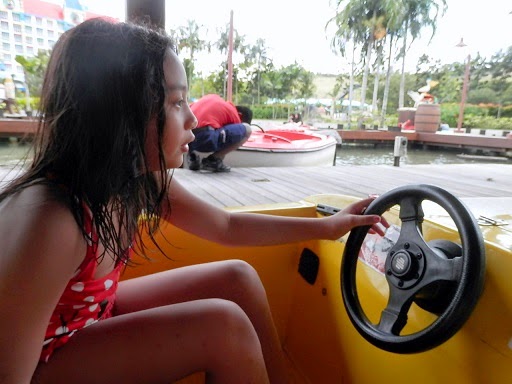 Would-be captains can take the wheel of their very own battery powered boat at the Boating School. Families can set sail together with three people to a boat.

My little girl had a fun time with this as we were practically bumping the boat everywhere being a first time ...eheeemmm... 'captain'

LEGO® City Airport gives potential pilots and their parents the chance to lift off together in a LEGO® airplane. Pilots are in control of exactly how high they go.


Visitors can tour the Park in style from the comfort of LEGOLAND® Express. This full size LEGO® train carries 60 people at a time over real level crossings.

The Shipyard is an adventure paradise for climbers and crawlers where parents can get involved in the fun.

Of course, do not forget to stop by the few LEGO shops to get your LEGO souvenirs, even if it's just a T Shirt or a keychain... (the keychain and magnets are just so adorable) 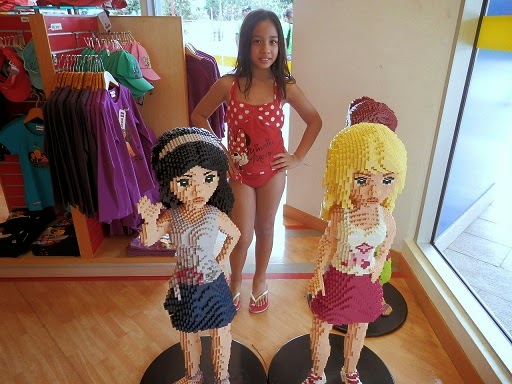 For those with more budget, do get some of those super awesome LIMITED EDITIONS LEGO sets which can only be found here... I was looking sooooo longingly at the Lord Of The Rings set and wishing I had won the lottery so I could get the whole set.... huhuhu... maybe someday... 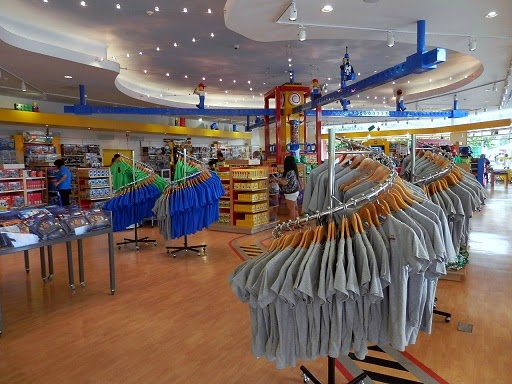 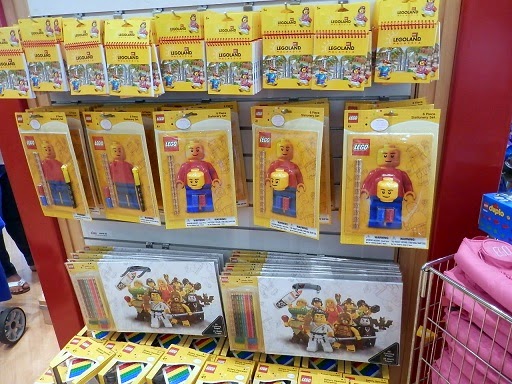 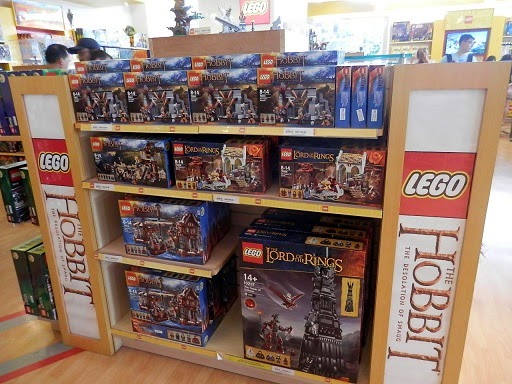 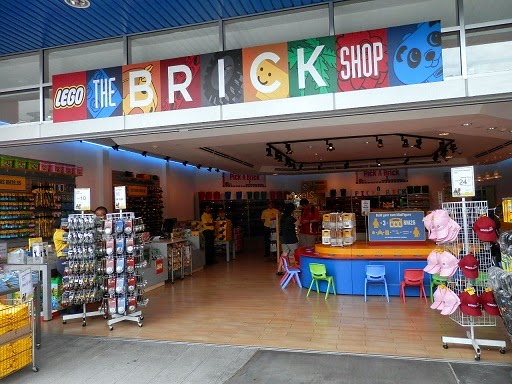 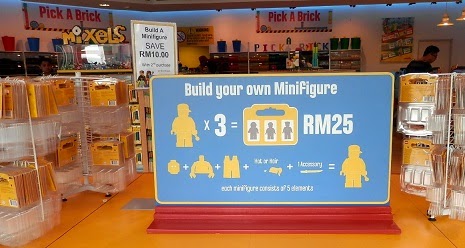 The LEGOLAND Malaysia Resort is easy to reach from Malaysia, Singapore and throughout Asia. It is located in Nusajaya (the southern tip of Johor) and is only 10 minutes from Singapore’s Tuas Second Link, 15 minutes from Johor Bahru City Centre and 20 minutes from Senai International Airport.

LEGOLAND Malaysia Resort is served by a number of bus terminals in the surrounding area. Buses operate every day from JB Sentral, Larkin, Gelang Patah and Johor Premium Outlets (JPO). A dedicated service leaves Larkin for LEGOLAND every thirty minutes during peak times. Each round trip costs RM12. A direct coach service from Singapore departs from the Singapore Flyer every 30 minutes during busy periods, and arrives at LEGOLAND in less than an hour. The return journey costs SG$20 per person. There is also a shuttle service from the Tuas Singapore second link, which is only 10 minutes away.

Passes
There are two types of Annual Pass offered. It is valid for 12 months and can be used at any time during normal operating hours, including weekends, public and school holidays.
i. Premium Annual Pass, which provides
unlimited access to both the Theme Park
and Water Park.
ii. Annual Pass provide unlimited access
to only Theme Park.


Oh... Before I forget.. thanks to LEGOLAND Malaysia Resort and Wall's Paddle Pop Ice Cream for this awesome holiday