Chinese Drama Series: Love on the Prairie / In Love with Power

Being a fan of Chinese Drama Series, this one pique my interest when I saw the sneak preview . It is currently airing on 8TV but is already halfway . I had it recorded on my PVR and am just watching the first 10 episodes and I love it loads....

The series began on the 8th of December and is airing on 8TV at 3 pm every day from Mondays to Fridays.

Synopsis:
Love on the Prairie or In Love with Power is set during the reign of Hong Taiji, the founder of Qing dynasty. He formed military alliances by marrying the daughters of the powerful or wealthy clans. He first married ZheZhe of Mongol Borjigit clan. Then to solidify her clan’s support, he married her niece Yu'er. However, it was Yu’er's low status half-sister, Harjol, that he favored above all. His favoritism caused a rift between the women in his harem, and since Yu'er who was so deeply in love with Hong Taiji even before he was married to her auntie felt betrayed, she poisoned her sister to make her barren. She also formed a secret alliance with his younger half-brother Dorgon who had been in love with her to push her son on the throne over his eldest son and other powerful brothers.

Before that, whilst playing in the prairie, Yu Er found herself in trouble and was saved by a mysterious man whom she nicknamed Black Hawk. She was smitten by that man. Along the way, she met Dorgon, who fell in love with her.

Dorgon's attraction to her did not go unnoticed by his father who tried to match make them but Yu Er declined and ran away . Around the same time, she was bitterly disappointed to find out that her Black Hawk was actually her auntie's new husband.

Then the Khan fell ill and she came to his tent to find him dying . He handed her the seal of his seat and whispered Hong Tai Ji and Dorgon before dying and leaving her greatly confused .

When the Khan's sons came in, she could not answer and fainted. When she came to, and was being pressed by the would be heirs again, she told them it was Hong Tai Ji that was being chosen.

Meantime the chieftain's wife hated the sight of her step children or her husband's illegitimate children and made their lives miserable in  oppose to her daughter's affection and closeness to her half sister.

Furious, Yu Er's mother got the army to go out to fight just before the wedding and in the fruckus, the young general Zhuo Lin in was reported killed as he tried to rescue Harjol's brother Akula. Then she tried to get the shaman of the clan to kill Harjol by saying that she needed to be buried with Zhuo Lin.


Yu Er rushes to the new Khan, Hong Tai Ji and pleads with him to rescue her sister. They rush back just in time to save Harjol from being burned at the stake.  But when rescuing the damsel in distress, Hong Tai Ji finds himself attracted to her and cannot get her out of his mind.

To save Harjol from her mother's wrath, they decided to stay with Hong Tai Ji.

Zhe Zhe gives birth to a daughter and her position wobbles and to strenghten it, her brother decided to marry Yu Er with Hong Tai Ji. Zhe Zhe tries to suggest it to her husband but he brushes the thought away as he thinks of Yu Er as a child, until one day Yu Er helped his settle a problem with a Ming emissary and her brother stated that Yu Er had a lucky star that would see her as a queen someday. Hong Tai Ji then agrees to marry her much to Yu Er's happiness. Dorgon is heartbroken as he wanted to marry Yu Er above anything.

He tries to make her give up on marrying his elder brother and marry him but to no avail. Disappointed he stays in the forest on their wedding night and demands to leave to fight of the Ming threat which Hong Tai Ji allows. Hong Tai Ji cannot get Harjol out of his mind still .

As Dorgon makes his plans with Duoduo , his younger brother to go to war, they are stalked by a skulking bear which earlier Dorgon could not bring himself to shoot in a hunt with Hong Tai Ji. The bear turns into a human and runs away... and this bear is Zhuo Lin? Apparently he was half dead in the battle field when he was attacked or bitten by the bear and is now a Were-Bear??? !!!

The clan chief, (Yu Er and Harjol's father ) decides to give his position to Argula his illegitimate son as he finds Argula more promising then his own son Wu Ke Shan. He wants to divorce his wife (Yu Er's mom) but in their scuffle, he dies in an accident. Wu Ke Shan tries to kill Argula and his mother. 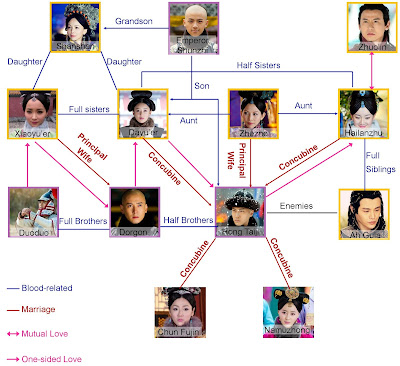