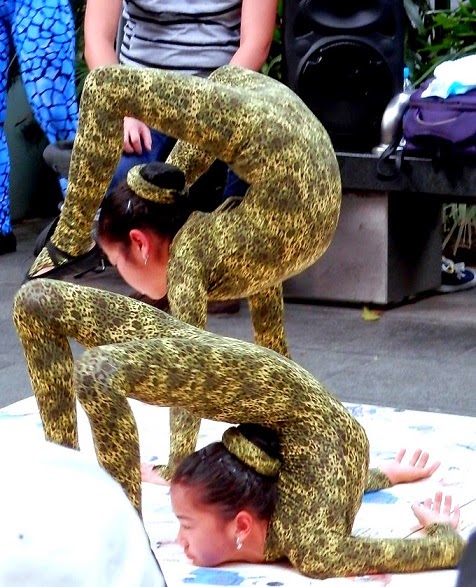 While passing by busy Orchard Road admiring the Christmas decorations, yours truly and her little girl came across a small crowd that gathered somewhere outside Wisma Atria.

Being a kay poh chee or Miss Busybody, curiosity got the better of me and I excused myself and half pushed my way through to a small opening I could find in the crowd to be mind boggled at the sight of two little girls sinuously bending unnaturally in all directions. 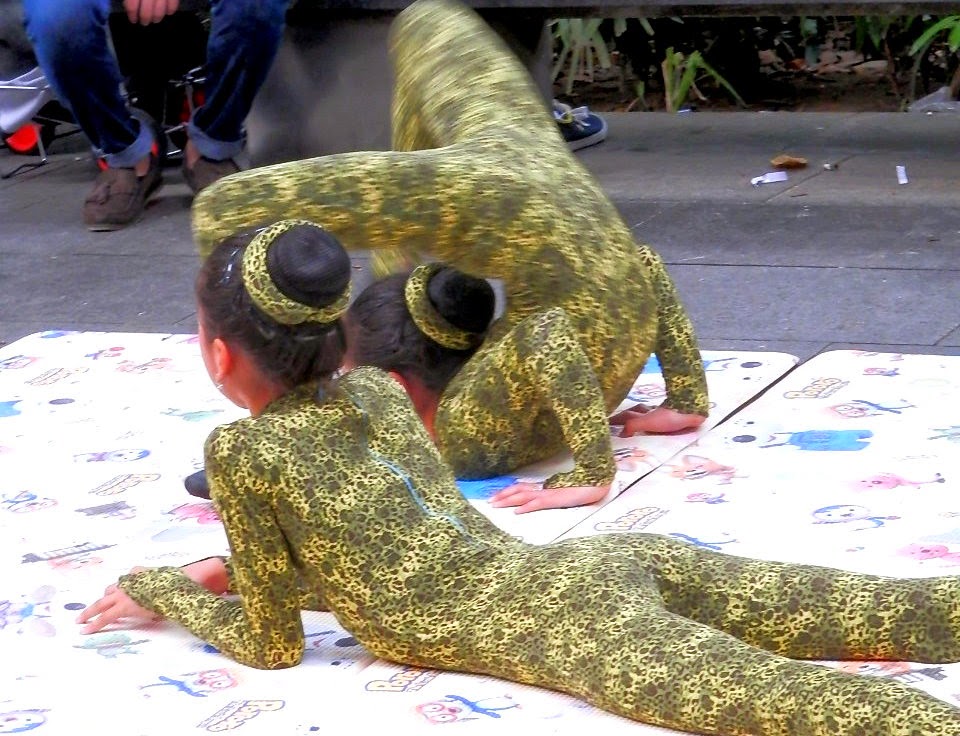 The girls may look like your average 8 or 10-year-olds but when these acrobatics kids take centerstage, be prepared for some jaw-dropping moves. They broke no sweat as they combine grace and agility to create beautiful (albeit dangerous) sequences that should definitely not be attempted at home. 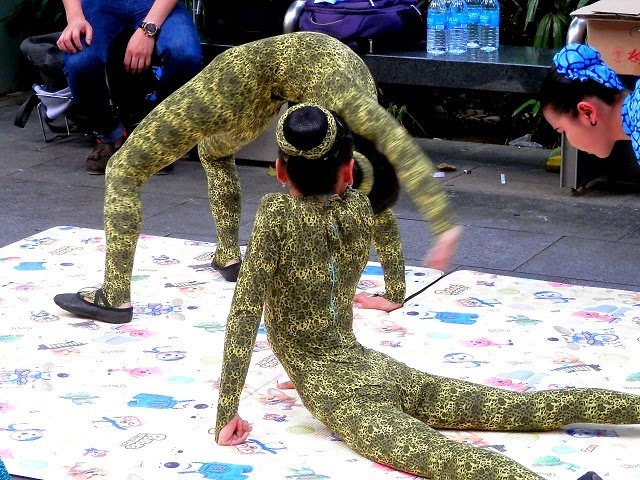 My daughter and I were pretty fascinated and nicknamed them the "snake girls" (I admit, it might be an unfair nick name,  and they would probably not like to be known as such but it popped into  our minds as we watch them) since they looked as sinuous and have naturally fluid movements that enable them to contort themselves like snakes and in their snake like costumes....  ermmm... enough said... but I apologize in advance to anyone who might feel offended... 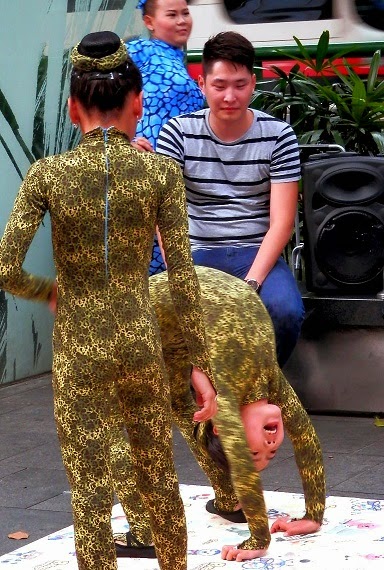 There are plenty of rumors throughout the years and around the world on the conditions that produce these type of Chinese acrobats.

There are some that say their parents sell them to the acrobatic troupes at a tender age and they remain virtual slaves until they are past their acrobatic prime, when they are released to make their way as circus performers, street hustlers, or cripples.  Whereas there are also other rumours that say that poor Chinese parents scrape together the funds to send their kids to these acrobatic schools as young as possible in hopes that the training will lift them out of poverty faster than any conventional schooling. 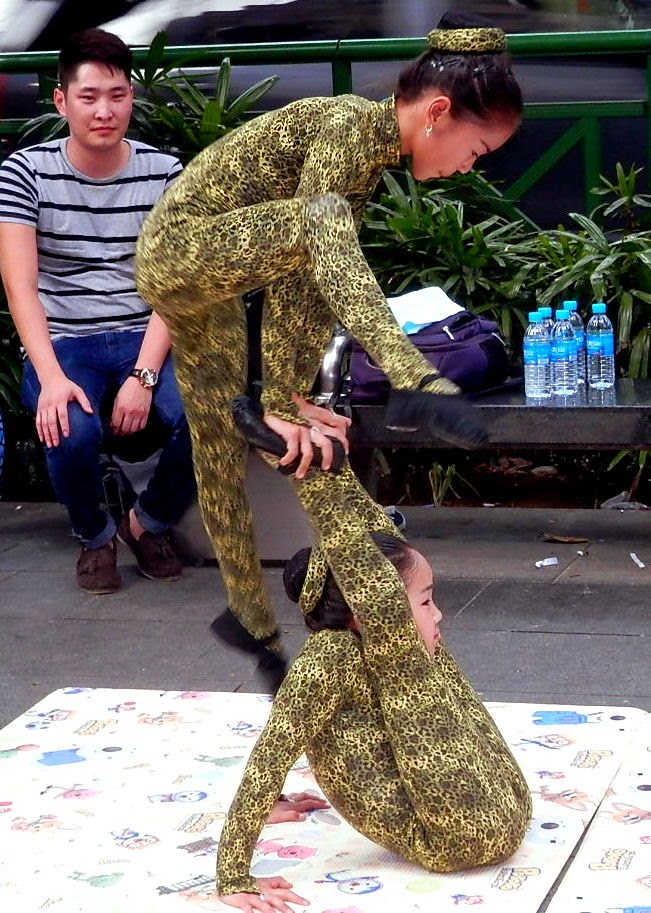 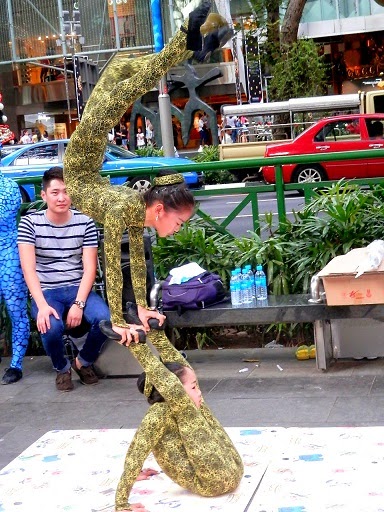 And it is easy to view arduous round-the-clock training, especially on a supposed diet of rice and broth, as abusive of young kids, when we do not know what some other kids like them could be doing living in the slums.

When in training, each month, the difficulty level will be raised and these kids will learn a new set of even tougher stunts.

Most of them show a maturity not matching to their age, as they silently force themselves to do whatever their trainer demands of them during the tough training, even when the pain is excruciating . It has been in grained in most of them that what these kids have to endure now could just ensure their  future success. 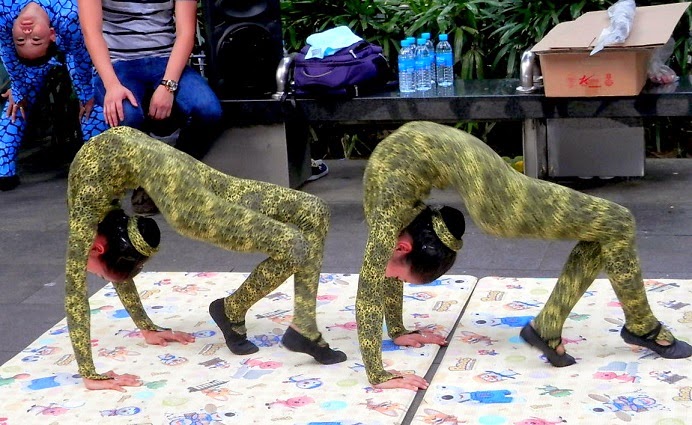 Nevertheless the kids here did show amazing skills and made us wince with their flexibility. They looked like they were having fun showing off and my little girl and I were just enjoying the show with our mouths slightly agog. 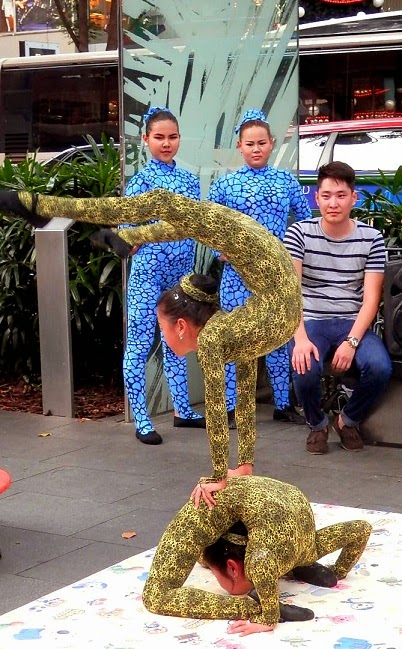 So do feel free to show your appreciation of these young acrobats skills with some cash donations as there is a blue basket there to collect some funds. There are those who say these acrobatic kids are from Mongolia and raising fun for the orpahanage there... but I won't know as I did not quite stay that long either...