Tourist get mauled by tiger in Phuket's Tiger Kingdom

The Big Cat area holding large animals have been temporarily closed at the Phuket’s Tiger Kingdom park after an Australian tourist was mauled earlier this week.
Tourists can still see smaller tigers in cages, but the zone where tourists can pet and pose for pictures with animals was closed off following Tuesday's mauling of Australian tourist Paul Goudie, 49
Witnesses at the scene said Goudie, from Melbourne, stepped inside a cage to pet one a 15-month-old cat. The animal unexpectedly attacked and a park attendant had to drag the victim to safety. He suffered bites to both legs and stomach. He has reportedly  undergo one surgical procedure, with more scheduled.


At the tiger park, tourists are invited into a special caged enclosure with handlers as part of the visitor experience.

“We did everything as the park people advised,” Goudie told reporters .
“I am not sure why it bit me,” he said.
He punched the tiger as it attacked him.
“When it did [attack] I had no choice except to whack it in the face a couple of times,” he said.
Thai authorities say Goudie, who has two steel pins in an ankle, may have moved awkwardly as park handlers assisted him back to his feet, with the unusual movement triggering an attack. The tiger was tasered by park staff, forcing it to retreat.
Read more about his interview:australian-tourist-describes-attack-captive-tiger-video
Tiger Kingdom opened in Phuket in August 2013 and draws hundreds of tourist per day. The park allows them to enter several different tiger enclosures, posing for photographs with the chained and sedated adult  tigers - sometimes even sitting on their backs - and feeding bottles to cubs.

Before entering the pens, guests are required to remove all loose belongings, including shoes, wash their hands and sign a waiver absolving Tiger Kingdom of any responsibility in the event of an accident.
Tiger and other animal parks in Thailand have been drawing increasing amounts of criticism, not only due to treatment of the animals that activists and many tourists say is cruel, but because the wild animals, despite their sedation, occasionally still resort to their natural instincts.
A 19-year-old British tourists was left with permanent scarring at Tiger Temple park in the Kanchanaburi last year when a fully-grown tiger knocked her down and bit her leg.
In 2011, a Thai woman suffered severe head and arm injuries after being mauled at the Million Years Stone Park in Pattaya.
Yours truly has been to the Tiger Temple in Kanchanaburi  and well, it is a fascinating experience to touch and stroke a tiger, but we have to still understand that they are wild animals and so we should not do anything to startle them or even deem us a threat though it can be hard at times with visitors all around and some of them thinking they can do anything they like because they paid for the privilege. 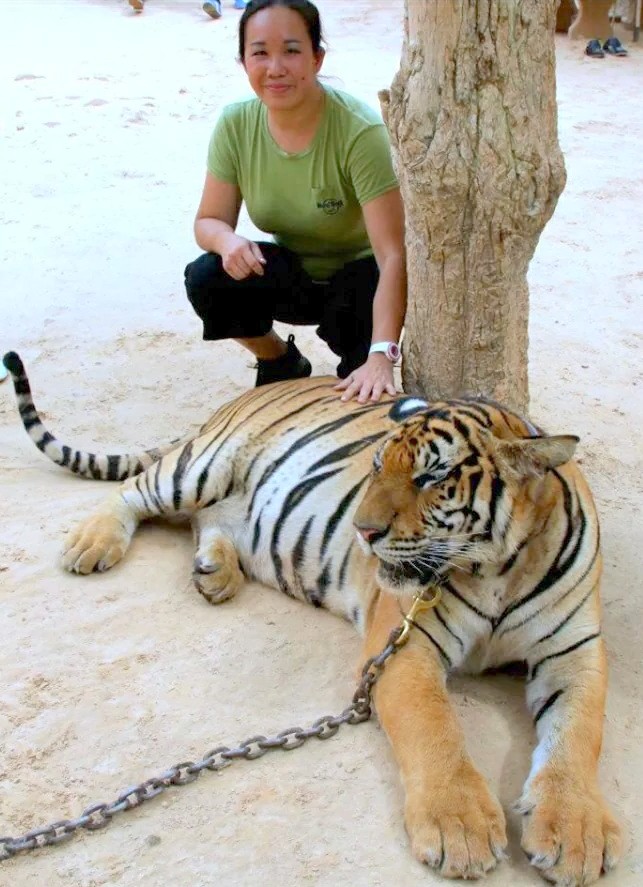 As for cruelty, I am of a mixed opinion here as there are two ways of looking at it . One is, the animals are well fed and safe despite probably some rough handling by some handlers if the tigers are in the wild, our world is no longer like the world years before where wild animals can roam safely in huge rain forest etc. 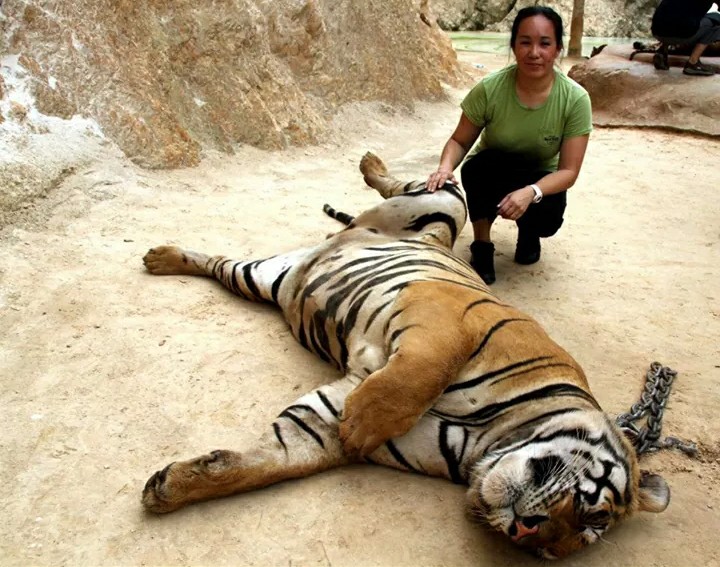 Instead, rainforests are being cut down and their natural habitat no longer exists and they are a threat to humans as well and at threat from illegal poachers as well.

This is my 2 cents. But naturally I do not like seeing the animals being roughly handled or abused. I believe there has to be respect all around.. between humans, humans and animals and so on.