Practically every culture invents a food that is weird or disgusting to outsiders. These weird gag worthy foods are cultural markers to show who's a member (insiders like it) and who's not a member (outsiders hate it.) Maybe it started off being eaten on a dare. On finding it edible or passingly delicious, they pass it on to the next generation.

Here are some weird Malaysian food I compiled... I know there are a lot more but this should be enough. Some of you might find it very familiar while others will think it strange...

The larval grub is considered a delicacy in much of Southeast Asia. "Sago Delight", or "Fried Sago Worms" are considered a speciality in Malaysia, although versions of this dish can be found in many Southeast Asian countries. Sago grubs have been described as creamy tasting when raw, and like bacon or meat when cooked. They are often prepared with sago flour. In New Guinea, sago worms are roasted on a spit to celebrate special occasions. They are eaten either raw or roasted, and are regarded as a special high-nutrient meal among most Sarawak tribes such as the Melanau and the Dayak.

Some Malaysian Chinese love consume pig brain soup with Chinese herbs as apparently, they believe pig brain has the benefits treating in wind syndrome of head and dizziness. The older generations strongly believe that "what you eat is what you become" or that consuming a certain animal body part will enhance the same part of the human body and in this brain thing for instance, if you eat lots of it, you will become brainy and smarter. Now pig is not suppose to be smart and maybe their brain is never been used and that's why older generation believe it has lots of memory power in it. Sup torpedo / Torpedo Soup is the name of a soup which the main ingredient is the penis of a bull. It is served at road side mamak stalls or at certain mamak shops and seved with a loaf of Benggali bread to be dipped into the soup. It will cost anywhere around RM5 to about RM8 perbowl , and the taste is supposed to be  like normal beef


Paru aka cow or goat lungs 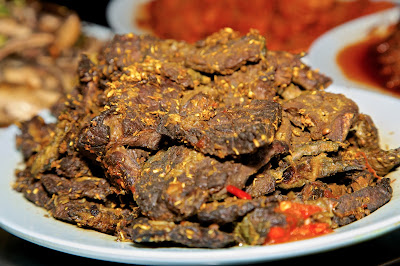 In Malaysia, cow or goat lung, called paru, coated in turmeric and fried is often served as a side dish to rice, especially in the ever popular nasi lemak. Heck, even my hubby and little girl like it a lot... but me, no thanks.. I continue to steer clear of this too..

Pig blood curd , also known as “blood tofu” or “blood pudding”, is a popular Cantonese delicacy in Hong Kong, Southern China and also Malaysia. Pig blood curd itself does not have taste, so it is commonly served with carbohydrates, such as noodles and congee. In Malaysia, it is served with the Penang Curry Mee.

Edible bird's nests are bird nests that are prepared and eaten by humans, particularly prized in Chinese culture due to their rarity and exquisite flavor. They are among the most expensive animal products consumed by humans, with an average nest selling for $2,500 per kilogramme for end-consumers in Asia. The nests have been used in Chinese cooking for over 400 years, most often as bird's nest soup.

Most nests are built during the breeding season by the male swiftlet over a period of 35 days. They take the shape of a shallow cup stuck to the cave wall. The nests are composed of interwoven strands of salivary laminae cement. The nests have high levels of calcium, iron, potassium, and magnesium

Century egg or pidan also known as preserved egg, hundred-year egg, thousand-year egg,thousand-year-old egg, and millennium egg, is a Chinese cuisine ingredient made by preserving duck, chicken or quail eggs in a mixture of clay, ash, salt, quicklime, and rice hulls for several weeks to several months, depending on the method of processing.
Through the process, the yolk becomes a dark green to grey colour, with a creamy consistency and an odor of sulphur and ammonia, while the white becomes a dark brown, translucent jelly with salty or little flavour. The transforming agent in the century egg is its alkaline material, which gradually raises the pH of the egg to around 9–12, or more during the curing process. This chemical process breaks down some of the complex, flavorless proteins and fats, which produces a variety of smaller flavorful compounds

Which is your reaction ???