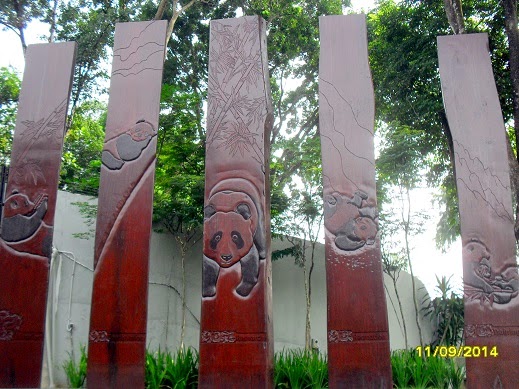 After all the hype and everything I've heard about Giant Pandas, especially Fuwa and Fengyi, or is it errm.... Xing Xing and Liang Liang? But I cannot recall who is Xing Xing or Liang Liang... oh dear... and I guess more people prefer Fuwa and Fengyi, ok, where were we? After all the hype, the good and the bad, - the bad being why our government wastes so much money bringing two on loan pandas down etc..etc...


And well, what is the hype about two big fat lazy creatures anyway... And yes, I do not deny it, I think these pandas are lazy too... all they do is eat and sleep... LOL. But please excuse this ignorant girl ok... Yet, despite thinking them lazy and a useless waste of money, I must admit I am truly fascinated too by them... What makes these pandas so fascinating?? 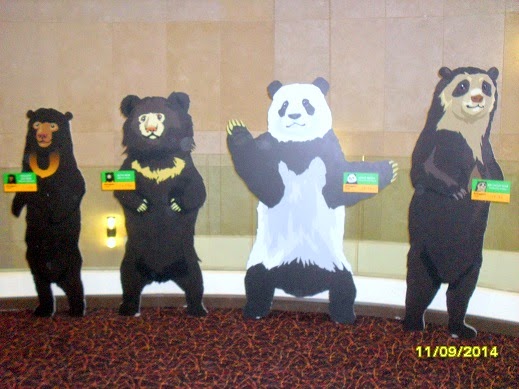 Here are about 8 interesting facts about pandas....

• A panda’s paw has six digits – five fingers and a  thumb (actually an enlarged wrist bone).


• There are thought to be less than 1,000 giant pandas in the wild, with a little over 100 in captivity.
• They’re found in a few mountain ranges in central China’s Sichuan, Shaanxi, and Gansu provinces.
• They inhabit mountain forests that are dense with bamboo and conifers.
• Because of their inefficient intestinal system, giant pandas have to feed for around 15 hours every day, with bamboo accounting for 99 percent of their diet.
• Giant pandas are one of the few species of bears that do not hibernate – it is unable to store sufficient fat because of its diet.
• They live at relatively high altitudes (between (1,500 and 3,000 metres). Their thick, oily fur helps keep them warm.
• At birth, an infant panda is 1/900th its mother’s size- very teeny weeny!!! 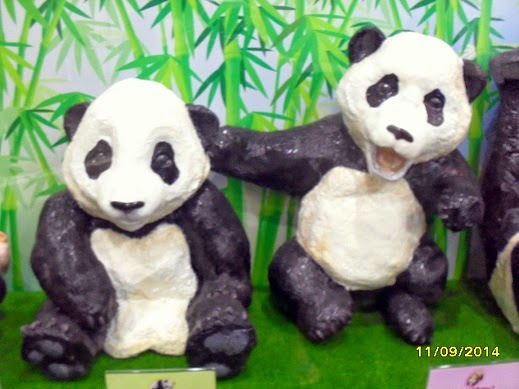 So here I am at the Panda enclosure and conservation centre Malaysia has spend millions to built. It is a beautiful place, relaxing and refreshing  as we stepped into what seem like another country, perhaps a mini part of China, with cascading waterfalls and the amazing sight of two big fat pandas eating or sleeping or wandering restlessly around.

For those few moments, all my worries, my stress dissipate as I find myself drawn to these amazing creatures.

Oh yes, you are only allowed a one time entry, but allowed to stay in the enclosure for as long as you like. There are plenty of protocols.. must keep quiet, no flash photography, no littering, no feeding panda, no food and drinks, etc...etc... and once you are briefed, you can do down to the enclosure and see the magnificent pandas. 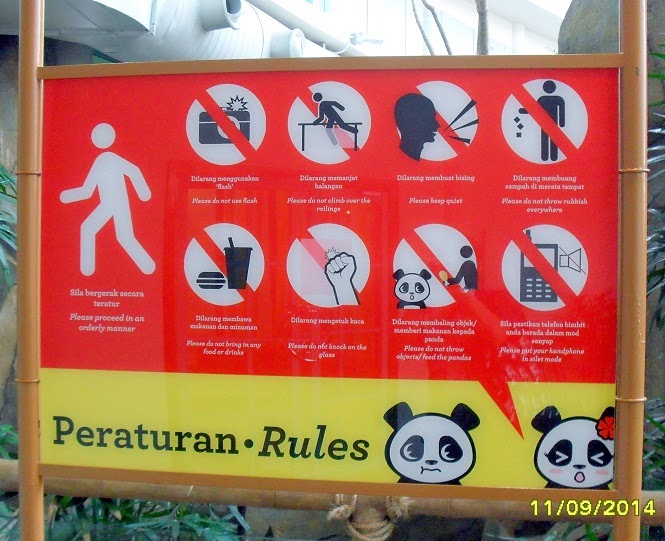 There are about half a dozen keepers there to make sure you abide to the rules and do not attempt to harm or frighten the pandas.

And....... my sight is arrested by watching Fengyi lumbering in her area... 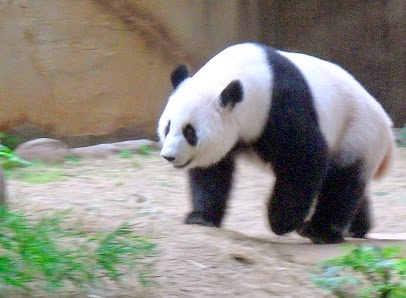 So, what makes these pandas so fascinating to us? To me? Two of the most popular answers to that question point towards their unusual behaviour and markings, as well as their endangered status.

They’re cute, they look so cuddly, but they are different from normal bears or other animals and perhaps that’s why everyone are drawn to them/

Some say that the panda’s ability to sit upright on its hindquarters while casually munching on a stalk of bamboo gives the panda an eerie, human-like appearance.

Its two-tone coloring, including a white face punctuated by black ears and spots over its eyes, also adds to its unique look inviting our nurturing instinct. The panda’s flat face, large eyes and clumsy nature also make it appear almost like a baby to many of us. 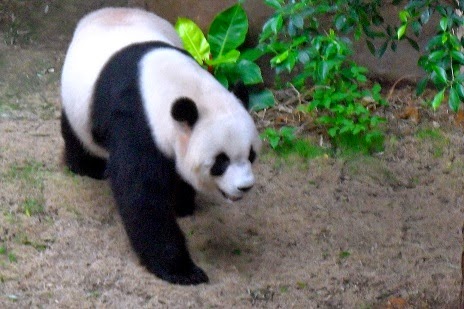 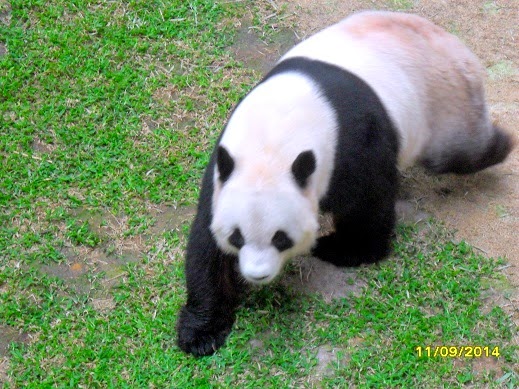 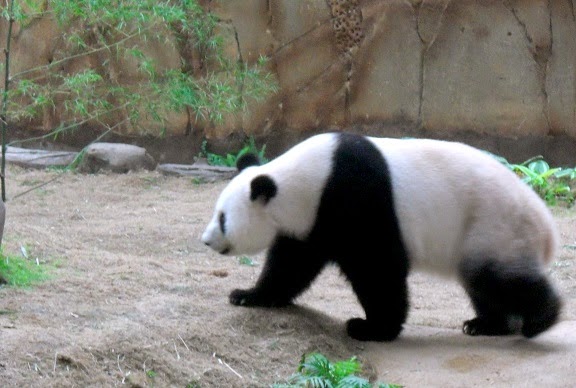 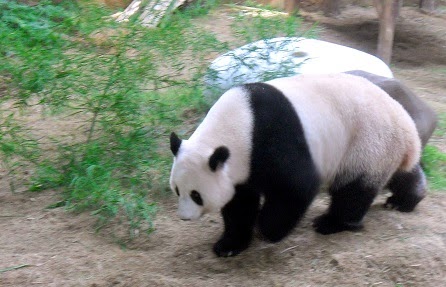 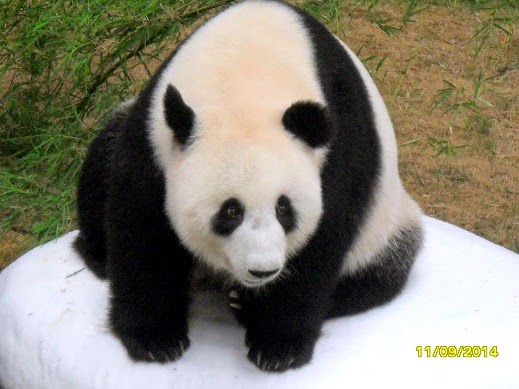 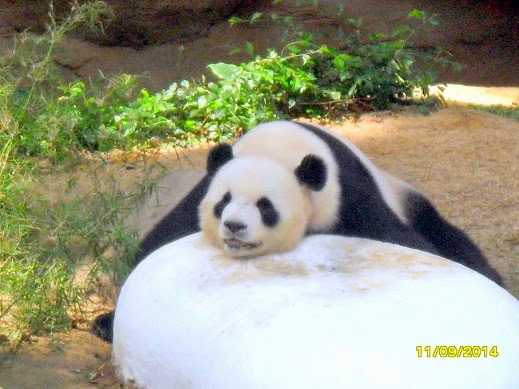 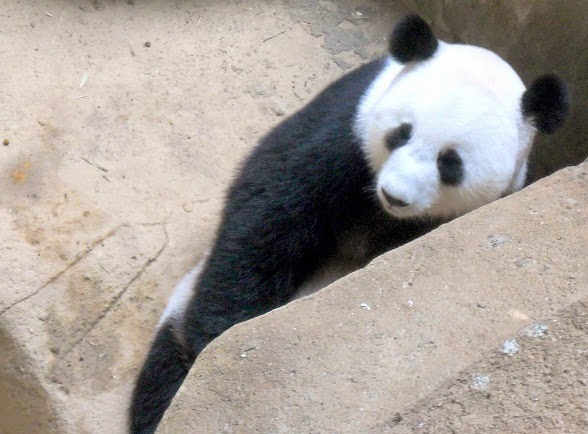 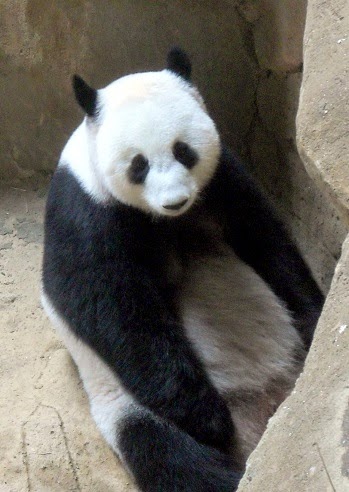 Fuwa rests on an ice block (I think), which he makes out as a pillow..... Below are pictures of the enclosure with steep terrain. They have a small waterfall each with a wooden bench, a wooden playground/block and ice blocks 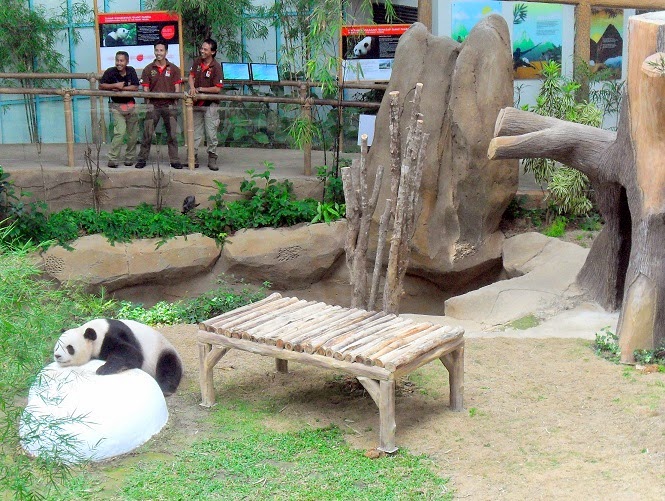 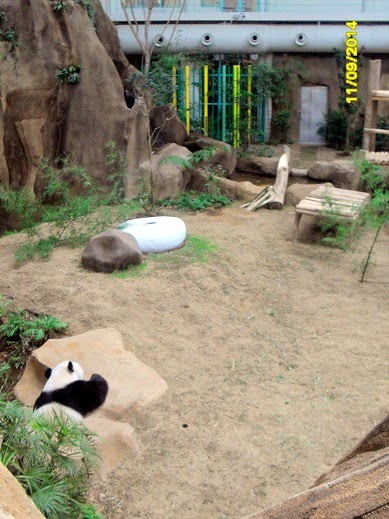 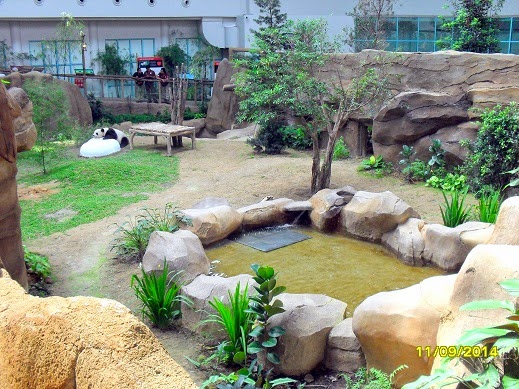 About the pandas.... Initially I thought they were siblings, but after reading this, it is obvious they are not, although both are born on the same day to different parents, but they have not been separated since then, going everywhere together as a pair. 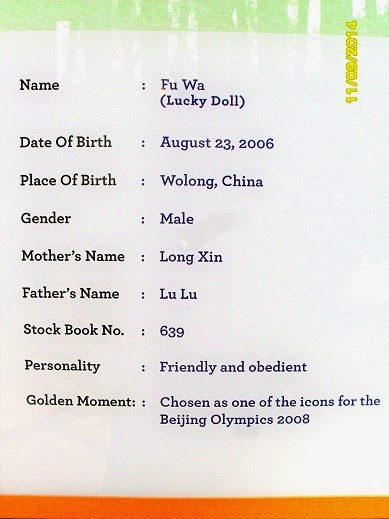 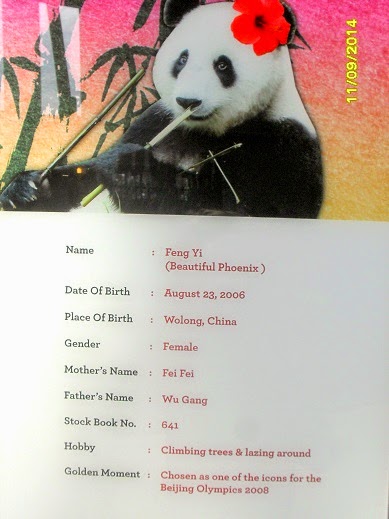 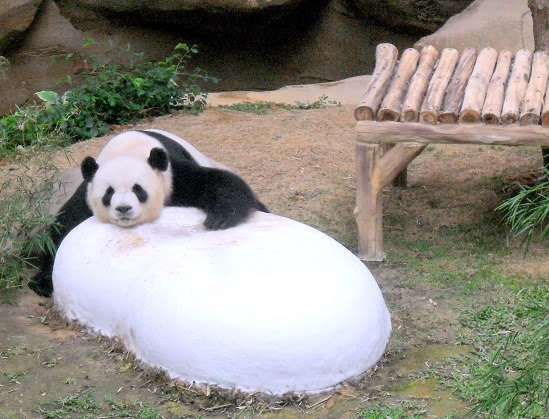 Yours truly here with a picture of Fuwa in the back ground... 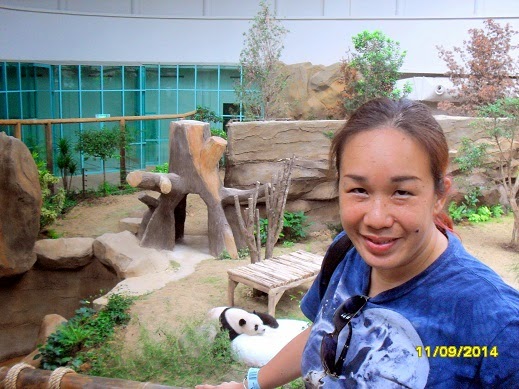 At the enclosure, there are a lot of facts to read from the posters and signages around. 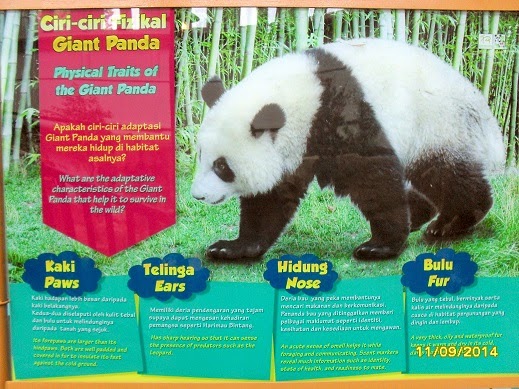 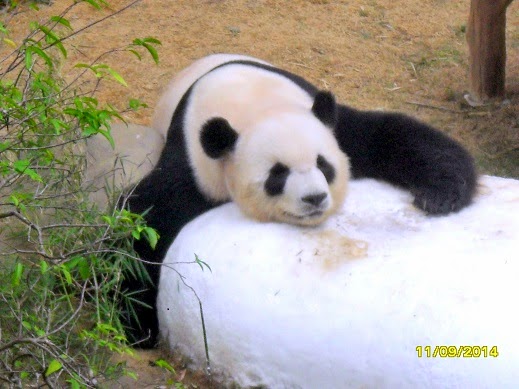 And when you are done with the pandas, you can  perhaps get a souvenir or two at the Zoovenir shop on your way out.

I got myself a nice t shirt, the only one that attracted my attention there and my little one got a pen, which was made like a bamboo with a little panda on it. I think that was nice. But I also think Zoo Negara should improve on more of the souvenirs, there are not much really nice ones which are exclusively from Zoo Negara, though I am starting to see the beginning of some. Take a cue from other attraction parks, like Sunway Lagoon, Universal Studios, or Singapore Zoo and such. I like the designs on the signages and the plastic bag my purchases came in and I hope that Zoo Negara will use those cartoon animals  to create more awesome souvenirs and such.

The panda frame for the panda photo was actually quite nice I think. 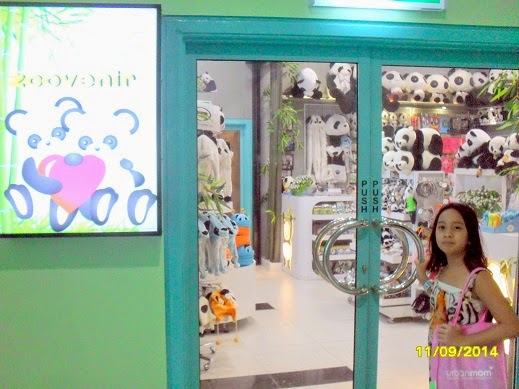 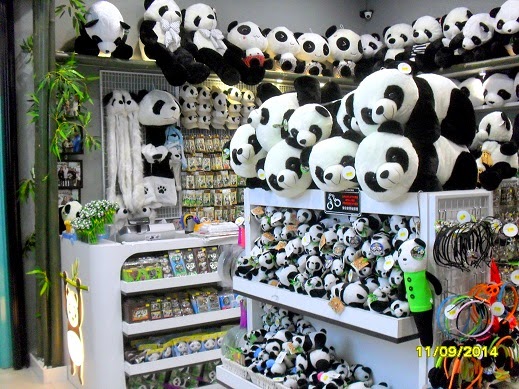 After shopping at the Zoovenir shop, we had to go through the Panda Cafe. The Panda Cafe is pretty with the panda wall posters but ermm.. the stools kinda reminded me of cows... Frisian cows or dalmations... huhuhu, no offence meant.... 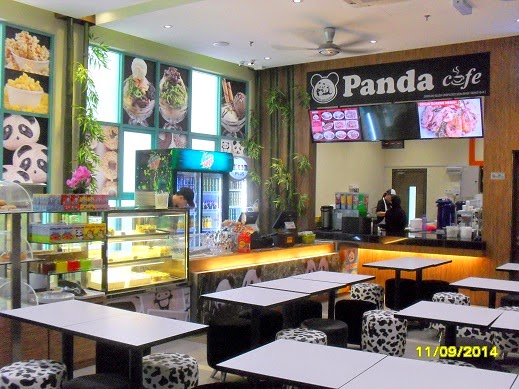 Outside, my little girl and I made another round back to take a few pictures with the cute 'statues' or giant figurines at the side of the building... 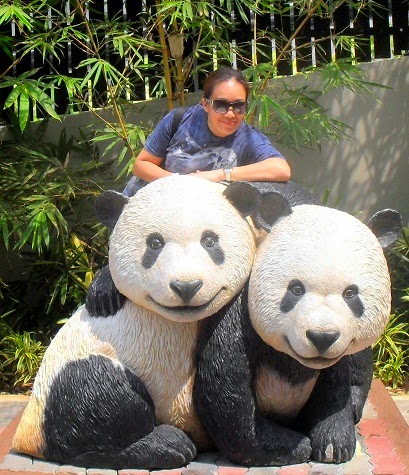 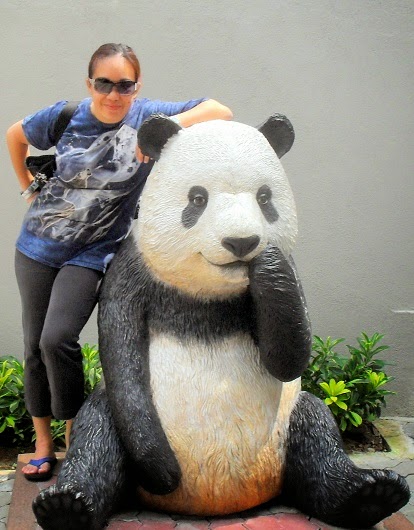 Bye Fuwa and Fengyi, will see you another time.... probably in 6 months or a year's time....