Prince Shwenadaw, Lanma Shandi and Xiayun Xian is half lost on the way to Chang An. They meet some street performers and exchange clothings with them.

Sujue has reached Chang An and Yeshaluo has changed into a much prettier and feminine dress to replace Lanma Shandi as the dancer in Sujue's troupe. He has also put out a notice that there are criminals from Pyu who is impersonating the prince and has guards from Tang on the look out.

Sujue meets up with his mystery associate. Then walks away. Just then Mr Xia , Shwenadaw and Lanma Shandi pass him behind. Both are not aware of each other.

Mr Xia meets up with an old friend who house sits for him. He then invites his companions into his house. He explains about how his family was unreasonably massacred and why he seeks revenge on the emperor but wants Shwenadaw and Lamma Shani to have nothing to do with his plans.

Captain Aman arrives and attempts to kill Sujue only to be stopped by Tang's guard and Hong Ni.

Shwenadaw and Lanma Shandi arrives to look for Ling Er but the guards said she had died but it was a ruse set by Hai Dong Lai. Shwenadaw almost got caught but Mr Xia saved him. Mr Xia tells Prince Shwenadaw to look for the mysterious know it all Mr Yuwen with his sword as a bribe .

Yeshaluo falls ill suddenly. The foreign officer Ms Xing cannot decide what causes her illness and wants to get the royal physician to check. When she got then physician alone, she admitted that she was the one who blocked her own veins and escape after knocking the physician out.

XiaYun Xian and Mr Yuwen who is a lady were engaged once. He goes to visit her after wanting to find out more about his missing might be daughter, Ling Er.

Hai Dong Lai has Ling Er in his place as a bait.

Somehow Yeshaluo finds her way to Mr Yuwen's house. Prince shwenadaw finds out about her feelings and how she risk her life to warn him about the dangers he might be facing. Even Lanma Shandi is in awe of her courage.

Yuwen Zhong has intelligence from all the poor, orphans and beggars because her father has always helped them and they now report to her.

Miss Xing is actually a chief commander Yue Shuan Xing for Tang, not the foreign officer she told Sujue. She reported all her findings to the Tang Emperor.

Guan Chuan Ling, Ling Er's adopted father pretends to visit Hai Dong Lai by bringing him some medicinal soup. He also sends most of the inner guards away.

Shwenadaw plans to use the sacred drum to stop Hai Dong Lai. Meanwhile, captain Aman is injured by Ms Xing and is rescued by Yuwen Zhong's companion/guard.

Shwenadaw rescues Ling Er from Hai Dong Lai's residence as Guan Chuan Ling and Xia Yun Xian lures him away and fights him. They lose very badly and at the last moment, Xia uses the sacred drum. They manage to stab Hai Dong Lai and injure him badly. Captain Aman finds him and saves him.

After sending Ling Er to her residence, Shwenadaw makes his way back but suddenly goes missing....

Hai Dong Lai denies having anything to do with Sujue when Captain Aman intergorates him.


Yuwen Zhong  begs Xia to forget his assassination plan and leave Chang An
Yuwen Zhong claims Shwenadaw could be captured by a ghost...Yeshaluo asks Sujue to rescue Shwenadaw.

Shwenadaw finds himself in an underground grave chamber with another elderly man who is chained.

Ms Xing finds Captain Aman again and this time captain Aman reveals the truth about Sujue's plans and why he wants to kill Sujue.

Shwenadaw finds a mysterious coffin which is empty.

So it turns out Guan Chuan Ling is Sujue's  mysterious accomplice. Guan Chuan Ling is the supposedly dead princess ' man. He wants vengeance and wants the emperor dead. sujue and guan chuan ling plays their cat and mouse game baiting each other to do the other's plan.
Lanma Shandi finds Hai Dong Lai .

Guan Chuan Ling meets the emperor and reports Hai Dong Lai is conspiring with Sujue... And the emperor assigns him as the Chief Commander, not knowing he wants to assassinate the emperor. ms Xing reveals her real self as Yue Shuan Xing and barges into Sujue's residence to search for evidence.

Ling Er finds the secret way into the underground tomb. Xiayun Xian chases after Guan Chuan Ling. Yuwen Lu, Yuwen Zhong's father tells her the truth.. That she is the bargaining chip to control Xiayun Xian and that his whole family was massacred by Guan Chuan Ling, except her.  As Sujue and Shwenadaw tries to escape and help Yuwen Lu escape, Yuwen Lu kills himself to save them the trouble. As they are escaping, they come face to face with Guan Chuan Ling.

Guan Chuan Ling wants Xiayun Xian to get rid of Yue Shuan Xing and then infiltrate Daming palace to kill the Emperor before he releases Ling Er.

Lanma Shandi pleads for Hai Dong Lai who is recuperating to help them.

Shwenadaw ask why Sujue won't kill Yeshaluo. Yeshaluo is actually General Karana's daughter whom Sujue spared as the last living bloodline of his adopted father. He killed all of Karana's male children and dump Yeshaluo in the streets to fend for herself, only monitoring her from time to time.

Yue Shuan Xing is amazed Hai Dong Lai is alive and putting on a show with Mr Xia. Hai Dong Lai cannot maintain his composure and stumbles. Lanma Shandi comes and explains everything to Yue Shuan Xing. Mr Xia appears and apologise too for attacking her and both of them tells Yue Shuan Xing who the real culprits are and of their hostages

Aman is surprised to see Yue Shuan Xing back so early and she fills him with the latest going ons and tells Aman that someone wants to meet him at night. That person was Shwenadaw. Shwenadaw enlists Aman's help to enable him to search and rescue Yeshaluo.

Yeshaluo tries to escape again and Sujue gets his girls to dislocate her shoulders. meanwhile Ling Er is poisoned by Guan Chuan Ling so she cannot escape and she depends on him for medication.

Hai Dong Lai still has a few faithful inner guards loyal only to him and he enlist their assistance.

Guan Chuan Ling is worried since both Yue Shuan Xing and Hai Dong Lai are missing or laying low.
Lanma Shandi finds Yeshaluo but is knocked out by Sujue.

Hai Dong Lai gets Guan Chuan Ling's attention to buy time while Yue shuan Xing rescues Ling Er. Hai Dong Lai is reinstated as assistant chief commander but he admits he is dying soon to Yue Shuan Xing but swears loyalty to the emperor and Tang even after he is dead. 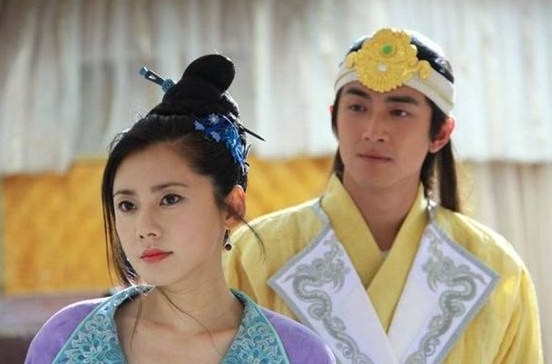 Yeshaluo hugs Shwenadaw as to bid him farewell but hands him a knife but is foiled by Sujue again.

He whispers to Hong Ni to kill both Shwenadaw and Lanma Shandi.

Shwenadaw already planned everything and was assured of Yeshaluo's safety, prepared to sacrifice his own life if need be.

Aman is overwhelmed having found out General Karana's daughter lives on.

Xiao Yao holds Shwenadaw hostage and when ambushed by imperial guards,Sujue betrays her and kills her to escape while Hong Ni looks on in shock. In misery and anger of her fellow sister so cruelly betrayed, Hong Ni tells Shwenadaw where Sujue is headed.

Shwenadaw tries to stop him. Yeshaluo tries to avenge herself on Sujue but Shwenadaw stops her. Sujue turns around to kill Shwenadaw and stabs Yeshaluo instead. Aman appears and shoots Sujue and exacts his promised revenge . Aman then surrenders to Shwenadaw but Shwenadaw forgives him and tells him to leave. Ling Er spends some time with Mr Xia, calling him father and hiding her health from him. 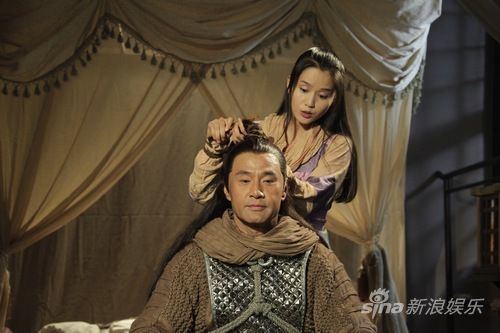 Yeshaluo is scared Shwenadaw will shun her now that they realize she is General Karana's daughter and Shwenadaw assures her he only haves her in his heart and dreams.

Ling Er dies in Lanma Shandi and her real father's presence from the poison much to Mr Xia's sorrow.
The day of the performance comes finally and Yue Shuan Xing escorts the troupe from Pyu along with Lanma Shandi who is having eye problem. Suddenly Hai Dong Lai appears and coolly tells them he wants to escort them to ensure nothing goes wrong as Guan Chuan Ling is still on the run.

Guan Chuan Ling gets someone to falsifies a royal decree and kills the man. He then uses the royal decree to get the inner guards to go against Yue Shuan Xing, claiming that she falsified the royal order and also to kill the troupe as they are rebelling against the emperor. Yue Shuan Xing tries to stops them...Hai Dong Lai goes to help her knowing it could be his very last fight.

Prince Shwenadaw steps foot in Daming Palace, sad at the sacrifices made for him and his troupe.
Mr Xiayun Xian mocks Guan Chuan Ling, throwing paper gold for the dead into the room Guan Chuan Ling and his men are. The paper gold is meant for his wife, daughter, yuwen Zhong, Yuwen Lu and all....

Lanma Shandi gives a breathtaking performance in front of the emperor who admires it and says it's stunning and graceful. Meanwhile Hai Dong Lai is dying after defending Xue Shuan Xing until the real royal decree arrives and put a stop of the inner guards fighting and states Guan Chuan Ling should be executed.

Mr Xia and Guan Chuan Ling are still dancing the dance of death with swords.. Prince Shwenadaw reminisces and feels sad for all the lives lost by those who tries their best to defend the performance for peace...

Peace is promised and the treaty goes well. The emperor reminds Shwenadaw unnecessarily to remember those who gave their lives for this peace. Lanma Shandi sheds a tear while Shwenadaw controls his grief.

Mr Xia gets stabbed by Guan Chuan Ling but manages to stab him.back.and slits his throat.
He is fatally wounded but make his way back to Lanma Shandi. Lanma Shandi whom is temporary blind is ecstatic he is back and cannot see his condition. She invites him to eat and chatters on while he slids down and dies. 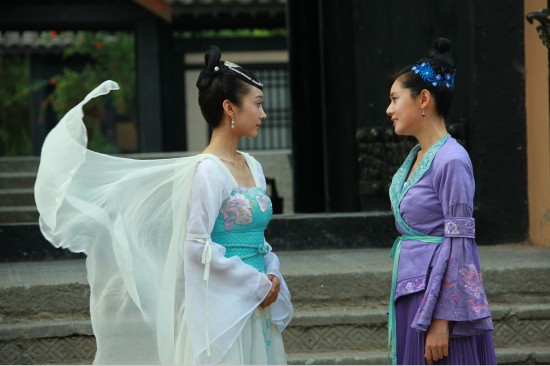 It's time to leave and only Shwenadaw and Yeshaluo leaves. Lanma Shandi decides to stay wanting to keep Mr Xia company as her promise to Ling Er as well as explore Tang.

Shwenadaw and Yeshaluo arrives back in Pyu finally and Yeshaluo is decked in royal finery. Shwenadaw gives her the jade token she had always been eyeing since the beginning anyway... Shwenadaw meets his parents and tells them of his success and that he wants to marry Yeshaluo but then his request is vehemently rejected because she is Karana's daughter. Yeshaluo hears this and decides to leave despondently. 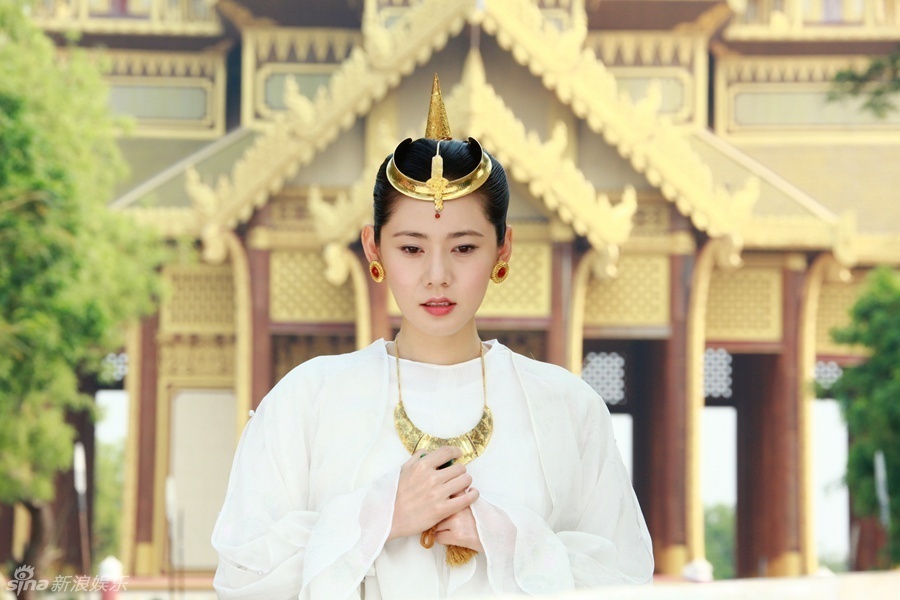 Shwenadaw chases after her and says he will leave with her and be a thief with her. She laughs him off and he grabs her in a hug. He tells her he is not afraid of anything other then losing her and he wants to be selfish because he wants her. She starts talking nonsense wanting to rob the palace with him and the national treasury with him and he assures her no guard will catch her...