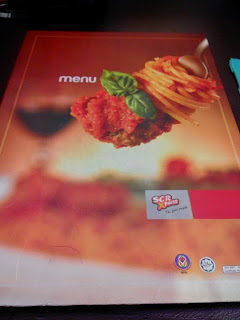 
Originally named Singapore Chicken Rice, it has rebranded itself into SCR and with introduction of SCR Xpress, which was introduced in early 2007 as another restaurant chains with a distinct blend of the old and new menu. SCR is set to expand it branches regionally through franchising efforts.
The SCR Xpress I went to recently opened at the Platinum Walk in Danau Kota, Setapak, right next to the KL Festival City mall, and my hubby and I thought it would be nice to try out a new shop.
We are after all fans of chicken rice. The ambiance was nice, the decor inviting and there was free WIFI available. 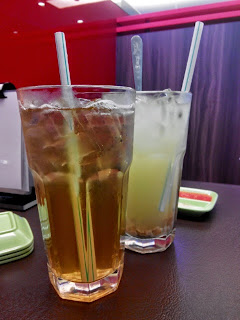 We ordered the chrysanthemum tea (RM3.50) which had a hint of honey but I think a bit too sweet, and a glass of the 3 sour drink (RM3.50) which was justifiably sour. 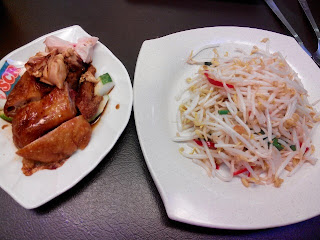 Then we ordered a plate of steamed chicken rice but was told that there was no more of that, so we made do with the fried chicken which seemed like a roast chicken (RM7.80) and a plate of bean sprouts stir fried with salted fish (RM7.30)

The rice was ok, and the chilli sauce was really quite lovely. 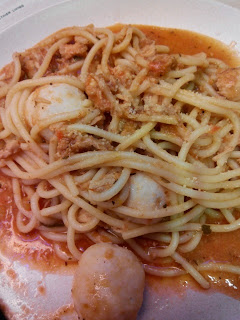 My little girl ordered the Spaghetti Bolognaise (RM9.80) with chicken meatballs but wasn't too fond of it. She did not like the chicken meat balls and my husband commented that the sauce did not look at all like the one on the menu, I have to agree on that but for me the sauce was quite ok, though I definitely have a lot of spaghetti that tasted much better. Overall, I think it was a nice place to hand out and have a meal though I still maintain that the bean sprouts is too pricey.  But if you do not have  fussy taste buds, this is a nice place to go...