People who delights in belittling others... 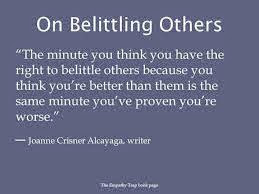 Sadly in this world we live in, there are always some people who can't stop putting others down.  This is often a sign of insecurity.  The critic is projecting their own feelings of insecurity, which they do not even recognize as obsessive,  onto others.

Comedians do make fun of others, but this is slightly different.  They find a grain of truth, and exaggerate it. Harith Iskandar and Jon Stewart are well known for this. The difference is that many others are in on the joke, and the person being criticized, or belittled, is often a person who themselves is playing the victim.

A useful rule when speaking about others, is to use two ears to listen, and just one mouth to speak.  Then choose your words carefully, as they will very often could contain venom that will poison the speaker. Many people genuinely believe that their own views are accurate.  They find fault with others, routinely.

When someone uses a lot of name calling, and attacks another about their values, gender, appearance, sexuality, or faith, we are witnessing this.  To attack someone upon their true and accurate behaviors, and upon their character is more tricky.

This is why is it so important to teach our children not to put others down. The sooner they learn that bullying, although an effective means of making others controlled out of fear, always sets up the one attacking to look petty, pretentious, and prickly.

Sadly sometimes, the one that belittle you and tell you you cannot do something, is often someone close to you, a family member, your so called best friend or even a  friend.

It can be when it comes to trying out a new job, a new career path, a business, or anything and there are times this belittling is unintentional and done with good intention to advice you.

So.... stay firm to your own believes and do not let it get to you.....Do what you have to do or what you want to try.... remember something...Giving up on something is guaranteed a failure... you never know unless you try........and when you try, success could be the answer, if you persevere enough...