Took my husband for his physio today and I could tell that the service here at the Sg Buloh Hospital definitely surpasses that of the Selayang Hospital.
Despite being quite young, the physiotherapist and doctor were very hands on and made my husband and all of us comfortable unlike at the Selayang Hospital where the doctor just told him what to do and left him at that.

Here, the physiotherapist used coaxing words and also advises. They spoke nicely and explained the benefits or why we should do the exercises given and also breathing techniques.
Where my husband was feeling quite put off and irritated by the doctor attending to him at the Selayang Hospital physiotherapy room, I could see him opening up and accepting these two boys whose sincerity and charm probably won him over and whatever they asked him to do, he tried his best..
That is the professionalism of doctors. Kudos to the physiotherapy team from the reception to the treatment rooms....
On to the next treatment date....2 weeks from now.... 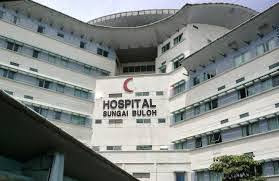