Neymar is out of the game from injury 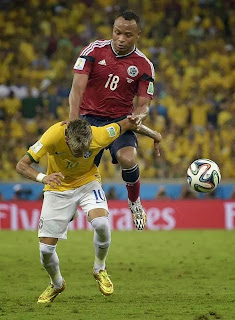 Brazil forward Neymar has been ruled out of the World Cup with a back injury suffered in the 2-1 quarter-final win over Colombia.
The 22-year-old fractured a vertebra in his back when he was kneed in a challenge by Juan Zuniga.

Neymar was in tears when he carried off on a stretcher, before being taken to hospital in Fortaleza.

Coach Luiz Felipe Scolari said: "Neymar was hunted. For three matches that has been happening."
Team doctor Rodrigo Lasmar said Neymar broke the third vertebra in the lumbar region of his back.
"It is a benign fracture," Lasmar said. "This news is not easy, but he will not be available at this World Cup.
"The fracture does not require surgery. There will be a conservative treatment; and he will need physiotherapy and comfort to ease the pain."

Lasmar added that he expected the recovery period to take at least a few weeks.
Neymar recovered from thigh and knee injuries sustained in the second-round win over Chile to play against Colombia.
He has featured in all five of Brazil's matches at the 2014 Fifa World Cup and is their top scorer with four goals.

Neymar at the World Cup
Matches played 5
Minutes played 457
Attempts on target 72.2%
Goals scored 4
Assists 1
Neymar was replaced in the 88th minute after Zuniga challenged him for a header in an incident that went unpunished by referee Carlos Velasco Carballo.
Scolari said: "Not even a yellow card, nothing.
"People think Germany, these or the others, only they are hunted but not Neymar."
Zuniga said he never meant to hurt a player. It was a normal move.
"I was playing for my country, not with the intent to injure. I was just defending my team."
Thiago Silva's early goal and a stunning David Luiz free-kick in the second half set up victory for Brazil, who withstood a late Colombia onslaught that saw James Rodriguez score an 80th-minute penalty.
Brazil will meet Germany in the semi-final in Belo Horizonte on Tuesday.
The hosts' captain, Thiago Silva, will also miss that game through suspension after picking up a second booking of the tournament against Colombia.
The final will be held at the Maracana in Rio de Janeiro on Sunday, 13 July.