Lionel Andrés Messi was born on June 24, 1987 in Rosario, Argentina to parents, Jorge and Celia Messi.

He started playing football at the age of 5 for a small club owned by his father and switched over to Newell's Old Boys at the age of 8. Even as a young boy, he did very well in soccer.

When he was 11 years old, he was diagnosed with  hormone deficiency. His parents did not have the money to pay for his medical needs, so they looked around for a soccer club that would be able to do this for them.

River Plate looked into the young player, but did not have the £500 a month that would be required to support his medical needs.

Carles Rexach, the FC Barcelona Sporting Director at the time, was of informed of young Lionel's talent and gratefully agreed to take him on if the family would move to Barcelona Spain.
The Messi family happily took the offer.

Upon entering the Barcelona soccer club, Messi did very well through his teen years. He was always one of the better players on every team he played with.

He started with the junior team, but was soon moved to the B team, because of his amazing talent.

In the B team he scored 37 goals in 30 matches right off the bat, which brought him up to the A team in a very short period of time.

In 2004, when he was only 17 years old, he made his official debut for the senior squad.

Later that same season, he scored a goal against Albacete, making him the youngest player to score for the club in a league game.

His first championship came in the Liga season of 2004-05. Since then, and playing a prominent role every season, he has won every major club trophy at Camp Nou -- including a stunning haul of six in 2008-09 -- and claimed the World Player of the Year [later the FIFA Ballon d'Or] award four times in four years.

Messi has proven his credentials on the biggest stage with goals in two of the three Champions League finals he has won with Barcelona, with his achievements leaving many in little doubt that he is the best player of his generation; possibly of all time.

That idea was given further weight in March 2012 when, at the age of 24, he became the all-time top scorer at Barcelona -- beating the 232 goals of Cesar Rodriguez.

The forward's hat-trick in Barcelona's 4-3 win over Real Madrid in March 2014 also saw him become the all-time top scorer in El Clasico clashes.

Messi endured criticism over his performances during the 2013-14 campaign despite scoring 28 goals in 31 Liga appearances as Barcelona lost the title to Atletico Madrid in a dramatic final day clash, but the forward committed his long-term future to the club with a new deal in May 2014.

Strengths: His ball skills are second to none, his runs from midfield are usually lethal and he is almost impossible to tackle when he gets his head down. His balance when running at speed is incredible.

Weaknesses: Too often he searches for a way to finish moves by himself without looking for team-mates in a better position to shoot at goal.

Career low: He was unable to perform to his best in the 2006 World Cup in Germany, where Argentina were eliminated in the quarter-finals with Messi looking on from the bench.

Style: Quick, incisive, balanced, a stylish runner with the ball.

Quotes: "Messi is my Maradona," said Maradona himself, as the head coach of the Argentine national team in 2010. 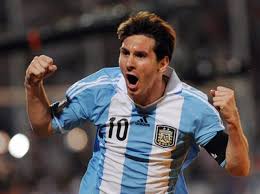 His net worth is about $180 million, and he makes about $64 million per year.
Messi is gifted with talents that most footballers can only dream of. What makes him special is that he possesses not just one or two but a combination of special skills that give him an edge over just about everyone. Here are 5 top traits:
SPEED
There are plenty of players who could outrun Messi in a 100-meter dash. But running with the ball is a different story. Messi can control the ball at close to top speed, making him an excellent dribbler. Also, it’s his acceleration rather than his top speed that cuts up defenses. Few defenders can keep up when Messi revs up from standstill, creating space for his left-foot shot.
BALANCE
Like former Argentina great Diego Maradona, Messi uses his short stature to his advantage. His low center of gravity enables him to make quick turns and to stay on his feet when challenged. Often, the only way to knock him off balance is to foul him. Defenders at the World Cup have been taking turns tackling Messi to spread the risk of getting booked around the team.
ACCURACY
Messi is one of the world’s top free-kick takers, striking the ball with impressive accuracy with his magic left foot. Almost always he hits the target or just misses it — you rarely see Messi blast a free kick five meters over the crossbar. In Argentina’s final group-stage match, Nigeria gave Messitwo free kick opportunities near the penalty area toward the end of the first half. He elegantly curled the first one over the wall, but goalkeeper Vincent Enyeama was well-positioned and stopped it. By the second free kick, Messi had fine-tuned his aim, and struck the ball perfectly inside the post. Enyeama jokingly asked the referees during the break to not give Messi any more free kicks.
PATIENCE
Patience is a perhaps and underrated virtue for a football player, and it’s one that has served Messi well in the World Cup. Every opponent has come with a plan to stop him, by closing down his space and tackling him as soon as he touches the ball. As a result Messi has looked out of the game for long periods. But instead of hanging his head and getting frustrated, Messi keeps looking for openings, patiently awaiting a moment when defenders take their focus off him for just a split second. That’s when he strikes. Against Iran, that moment came in injury time when he scored his second goal of the tournament. Against Switzerland, it happened in extra time as he set up Angel Di Maria’s winning goal with a piercing run down the middle.
INTELLIGENCE
Messi has the ability to read the game, mapping out paths to the opponent’s goal in his mind before the opponent does. That’s key to understanding why he’s such a prolific scorer. Knowing by instinct where a gap will open up for a quick pass or shot gives him an advantage over others, though it can also complicate things for the team. Sometimes Messi lets chances slip away by being too smart for his Argentina teammates, who aren’t in sync with him to the same degree as Andres Iniesta and Xavi Hernandez in Barcelona.