Bodies and body parts, debris from MH17 and surreal items of travelers in about 15 square miles

Bodies and body parts, debris from MH17 and surreal items of travelers in about 15 square miles 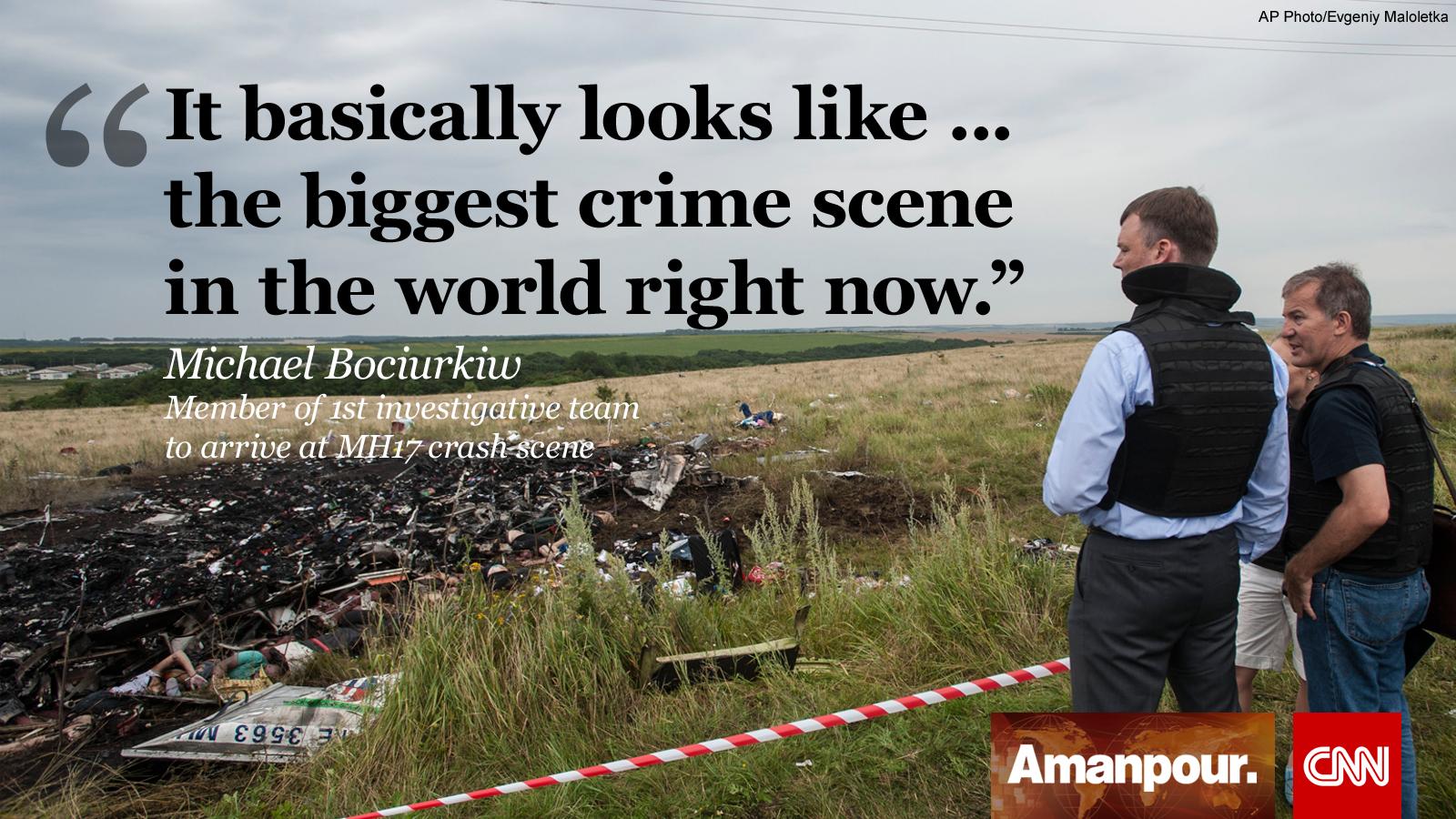 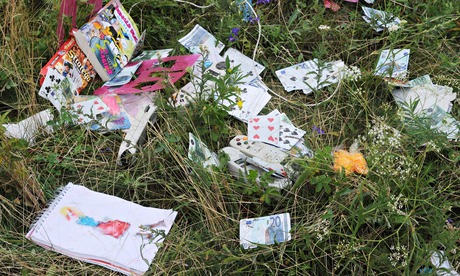 Passengers' items at the site of the MH17 plane crash in east Ukraine. Photograph: Dominique Faget/AFP
For miles around, you can see them, strips of white cotton attached to wooden stakes in the fields of eastern Ukraine. Every stake marks a victim from flight MH17, or at least a body part. There are too many stakes.

But then there is a lot of debris, a vast wash of metal, charred remnants, and the surreal items of international long-haul travel, smeared over a ruined 15-square mile area. Handbags. Footwear. Passports amid the sunflowers. You know some of the passengers had been on holiday. Scattered across the crash site was the unmistakable jetsam of vacation: sunhats and suntan lotion, summer clothing, duty free shopping, the occasional poolside novel. You know that children were here from the unopened packets of Haribo sweets, the scattered playing cards, a first-year drawing scrawled in a notebook, a small black-and-white stuffed monkey, winnie the pooh abandoned in the grass. Some of the bodies are perfectly intact, some ruined beyond recognition, some partly disrobed by the G-force of falling to earth. One woman lies partly burned, a hand raised above her head, stripped of all but her undergarments. 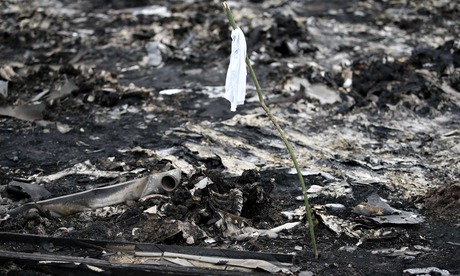 It was not just the human that died. An strange menagerie of dead pets lay scattered across the scene in the grass, bright blue and yellow macaws, a cockatoo, a random giant St Bernard dog curled peacefully where he fell.
The sticky Ukrainian summer will not be kind to the bodies. Warm sunshine gave way to rain and humidity on Friday. By late afternoon, the sharp tang of kerosene had been overpowered by something altogether more macabre: the cloying smell of death.
They're getting used to death here. This is a de facto war zone. Explosions rang out every few minutes as a reminder. And when the separatist rebels first saw the debris falling on Thursday afternoon, their initial thought was that they might be under attack from paratroopers.
"Initially I thought it was a paratrooper descending from the plane but then realized that there were people falling from the sky in the passenger seats," said one of the rebels Vladimir, 45, holding a Kalashnikov in his hands. 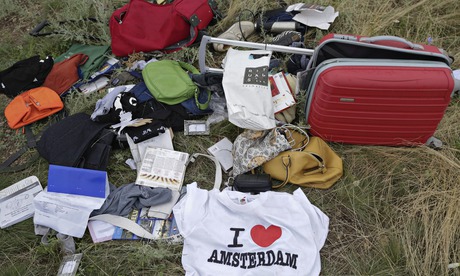 Rescue workers were overwhelmed by the scene. Volunteer miners combed the long grass for bodies; some of the first emergency workers on the scene bizarrely happened to be a unit trained in scuba diving search and rescue.
"This isn't our area of expertise," said Boris, 41, an experienced diver who drove his unit to the scene in a Soviet-era Gaz military vehicle. "We have no idea where anything is, we have a huge task ahead of us. We've not experienced anything like this, nothing on this scale." 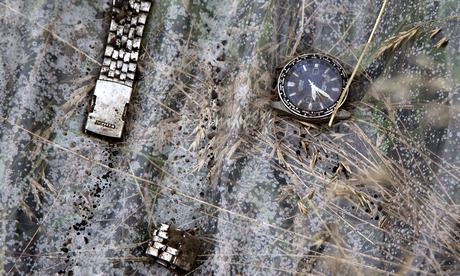 Rescue workers, most of them of unknown provenance, are slowly moving corpses from where they hit the ground and piling them on the side of the road. The victims are then covered with black tarpaulins.

Beside them, the belongings of the dead passengers have been piled in heaps. After each foray into the fields, workers clean their shoes with sticks because the ground is sodden from persistent rain. What will happen to the bodies now, to the sons, daughters, siblings, husbands and wives of grieving relatives around the world? No one really seems to know.
A rebel commander, who is known as Grumpysaid that the corpses would probably be carried to the mortuaries at Snezhnoe or Donetsk, but he didn't know for sure.
Ukraine's foreign ministry has said it will bring the bodies to the eastern city of Kharkiv for autopsies, and has promised to set up information centres and provide free accommodation for relatives. But in the chaos of the crash site, this seems an unlikely scenario: there is no sign that the broad access promised by the rebels to the crash site is actually being granted.
Despite reports of looting, fighters and local people say they have been doing their best to collect evidence and preserve the human remains