Yours truly have heard so much about Uber but never quite got around trying it until yesterday.

Yesterday, yours truly  was at an event in KL until about 9.00pm... 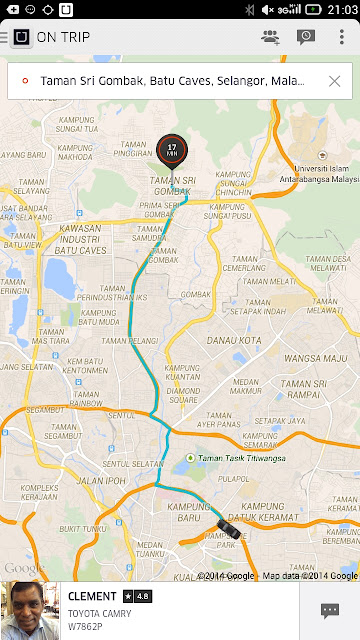 If you are used to trying to hail a cab, you know the problems you could face...

a) the cab would either shake their head and tell you they are not headed that area.
b)the cab driver would probably name you a ridiculous price.
c)it would take a while to hail down a cab that actually is willing to go your way for normal fare.
d) there are certain weirdos taxi drivers who might try to comment on your dressing or try to flirt with you or condemn you and so on...
e) the cab is stinky

I have actually encountered most of this problems some time or other.

So after a friend, a sexily dressed friend arrived in the safe comfort of an Uber, with nothing but good things to say, yours decided to take an Uber back.

I downloaded the App, and entered the code(see below) for RM30 free credits and since I was new at it.. I ordered an Uber Black which was a Toyota Camry which I was promptly informed was 10 minutes away from me. I could actually track my driver, Clement 's journey as he came to pick me up.

The app will inform you on your driver as well as the car sent to pick you, car make and car registration number.

Clement arrived to pick me up in a spanking clean and most comfortable car. Right at the dot after Uber sent me a text message telling me my Uber ride has arrived.

He was friendly and definitely professional. And since I confessed it was my first ride, told me a little about the basics of Uber..

There are 3 different rides. The Uber X which are MyVis and similar smaller cars.. Then the Uber Black which will be like my ride  Toyota Camry and such .. And Uber Luxe... Which would be Audis, Mercedes S Class and Beemers..

Rest assured riding in an Uber is way much better then a cab and your safety is most assured. You can even share your driver info and ETA to your family or friends.

Most of the clientele are women and celebrities and having taken the Uber once... I will be on another soon... Best of all there are no midnight charges unlike taxis.

My little girl who was with me was so comfortable, she slept on the ride back.

1. Order a Car
Use the iPhone or Android app to request a ride.
2. Your Driver Comes to You
Sit back and relax. Uber will text you when your Uber arrives.
3. Hop in & Hop out
After arriving at your destination, they'll charge your credit card on file and email you a receipt

Request when you're ready to ride - Pickups are strictly on-demand, so they don't accept reservations in advance. Just open the app a little bit in advance of when you need to leave and request a car.

Estimate your fare - You can get a fare estimate for your trip right in the app by following the instructions at t.uber.com/fareestimate.