My cruise aboard the Costa Victoria -Day 2 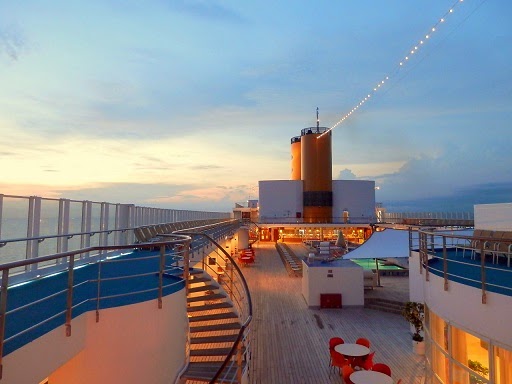 We woke up at 6 ish just to see the sky lightening and went up to Deck 11 where the swimming pool is to see the sunrise… Since my little girl was hungry like a horse, we went to have our breakfast there at Deck 12 at the Bolero Buffet, with the continental buffet breakfast, which was just a small buffet but we got to watch the sunrise as well. 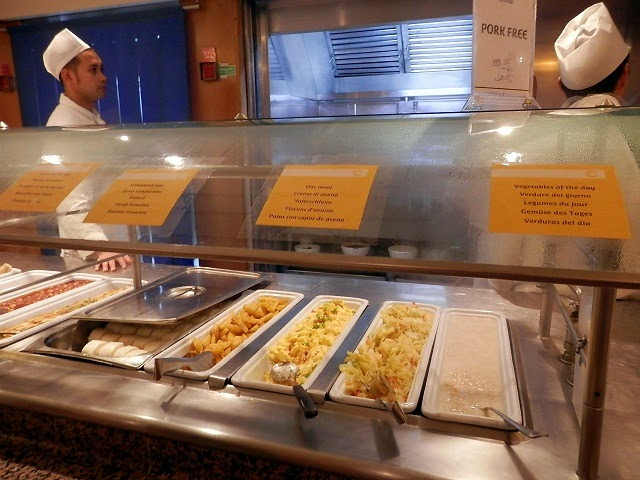 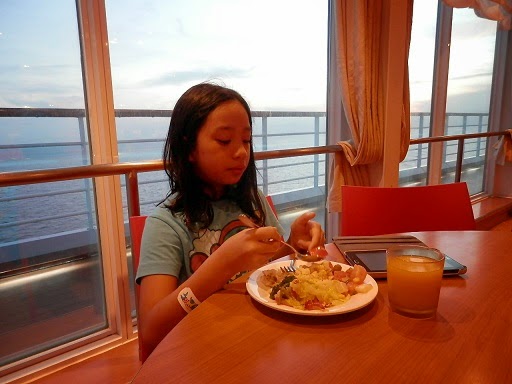 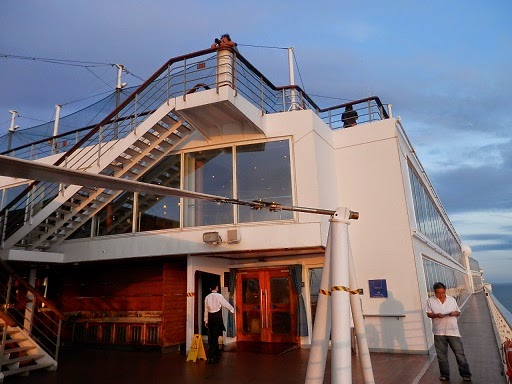 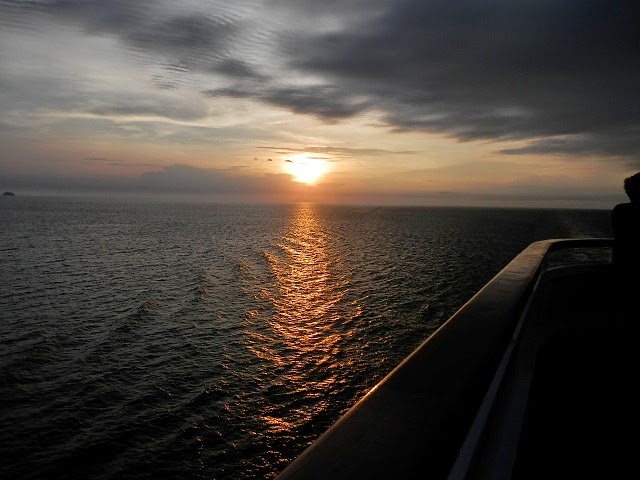 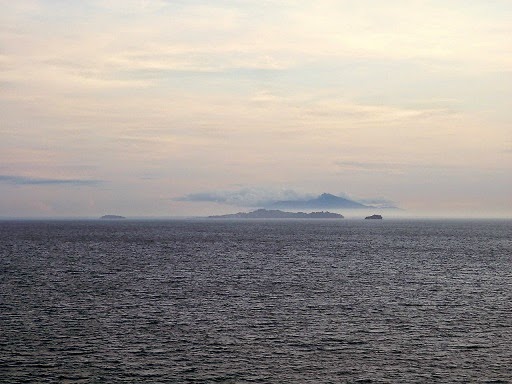 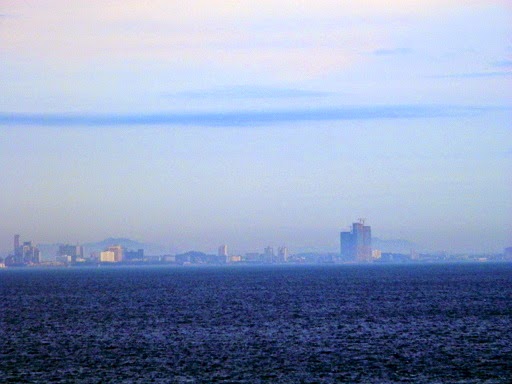 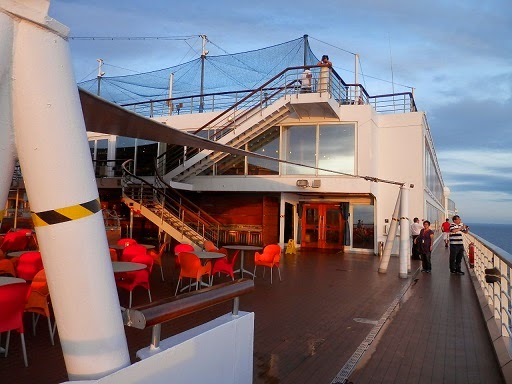 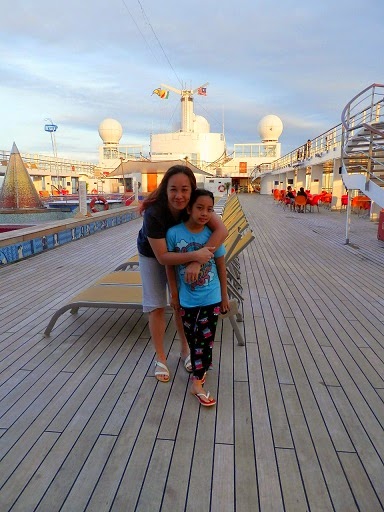 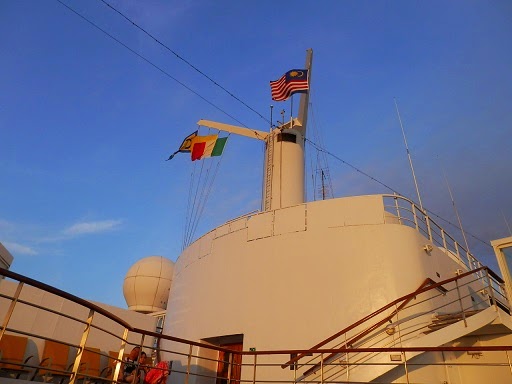 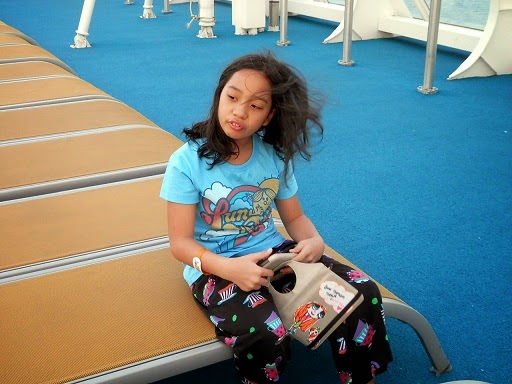 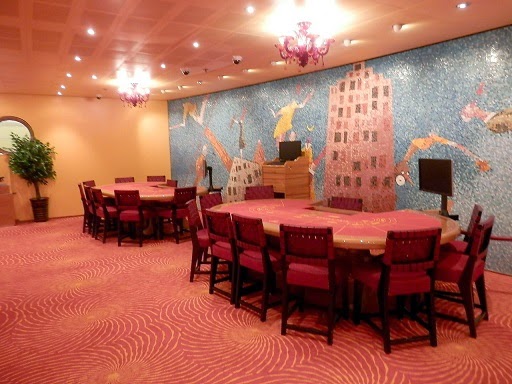 Being an average Muslim and learning first hand how gambling can wreck havoc in a family, back when my mother and “step father” were addicts , and growing up partially in a gambling den, I am not much of a gambler thought I like a little game sometimes with very small money with close friends, but naturally I must be winning. Thought of joining in the “Bingo game” which was held as there was a prize of USD1000 and it was tempting… but one ticket was USD5 to USD10 and you only get USD1000 only if your numbers were called within 53 numbers… so I thought against it. 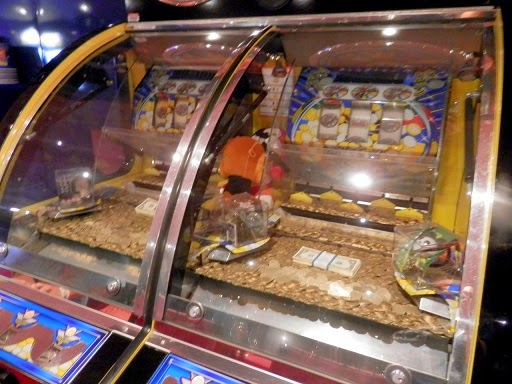 However, a stroll through the casino brought back bitter memories of a moment in time best left in the past. My little girl was fascinated and I explained to her how it was and what it was. 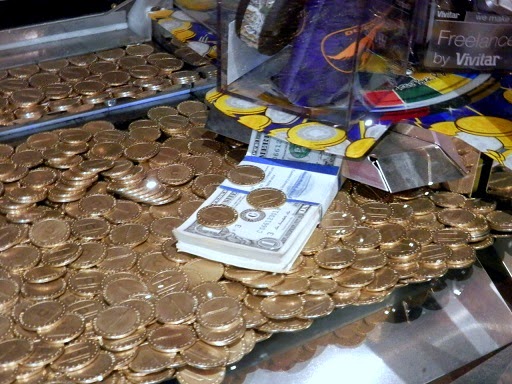 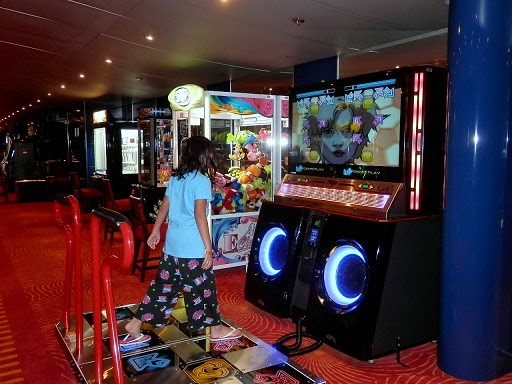 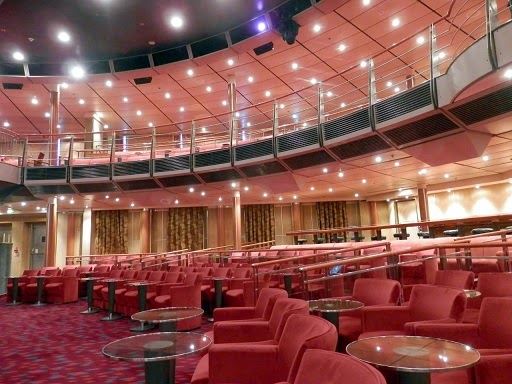 By then we had arrived in Melaka, and today the cruise gave us a treat to go on land to Melaka! So after breakfast, just before 8am, yours truly rushed to the Festival Theatre area to get her tender boat ticket. She was first in line .

They called the tender boat tickets number to Deck 3 and so yours truly dropped cutie monkee /little girl/ her little princess off to the Squok club first. 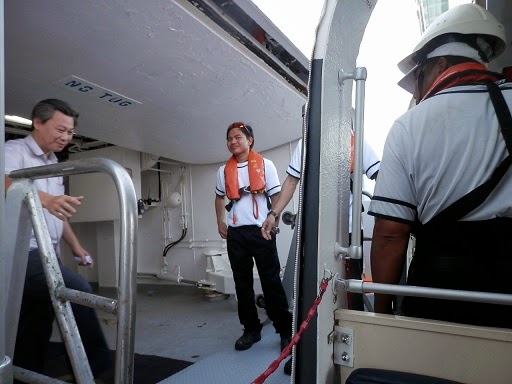 I then made my way down to Deck 3, the lowest Deck in the ship accessible by lifts and for passengers only where we were tagged again via our cabin key cards. We did not need a passport. We were then boarded into a tender boat which is also an emergency boat on the ship. I think there were 3-4 tender boats lowered down and working to bring all the passengers who wanted to take the opportunity to go on land.

One boat seats about 100 – 120 passengers me thinks… and our little boat trip began. The trip from the ship to the little dock was about 15 -20 minutes. They let us off at the little dock , a stone’s throw from the Menara Tamingsari / Dataran Pahlawan and since yours truly needed some emergency supplies of the female kind, I made my way to Dataran Pahlawan and went to the Guardian Pharmacy there to get my stuff. 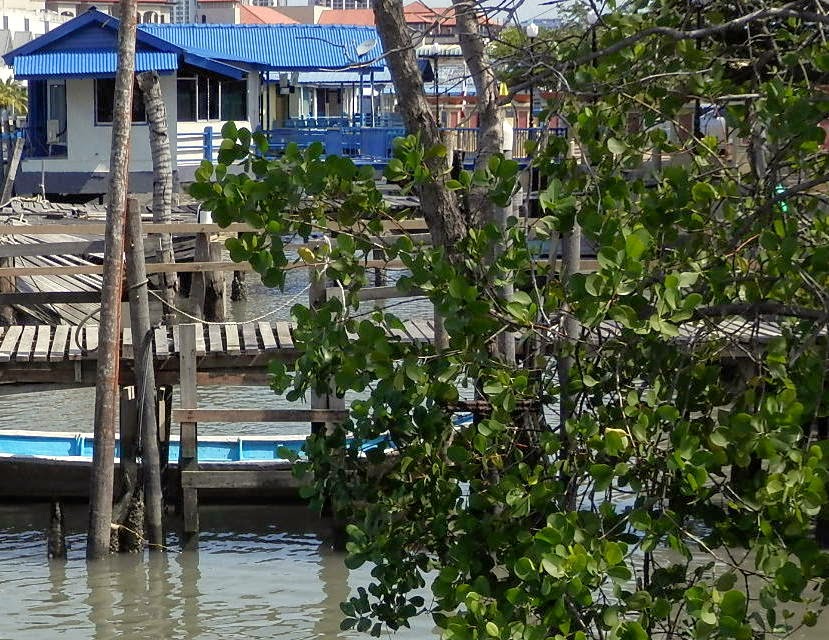 After that, I walked about for a little bit before making my way back to the dock and boat. Was tagged again before boarding the next available boat back to the Costa Victoria ship.

When we arrived, the security personnel screened our items to make sure we did not bring unpermissibles as well as food and drinks back to the ship. 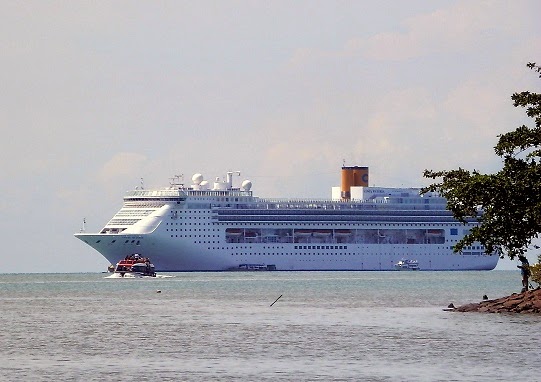 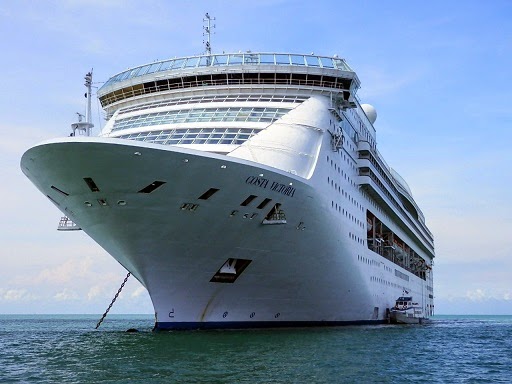 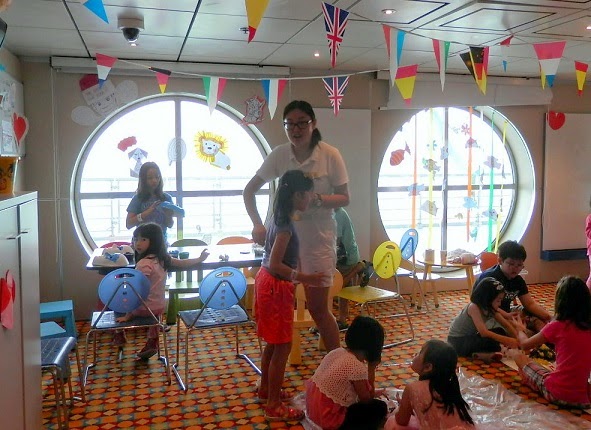 Then I was back in my cabin…..Picked up my little girl up from the Squok Club to bring her for lunch at Fantasia restaurant again. Then she went back to the club while I went back to take  a nap in my small but very comfy cabin. 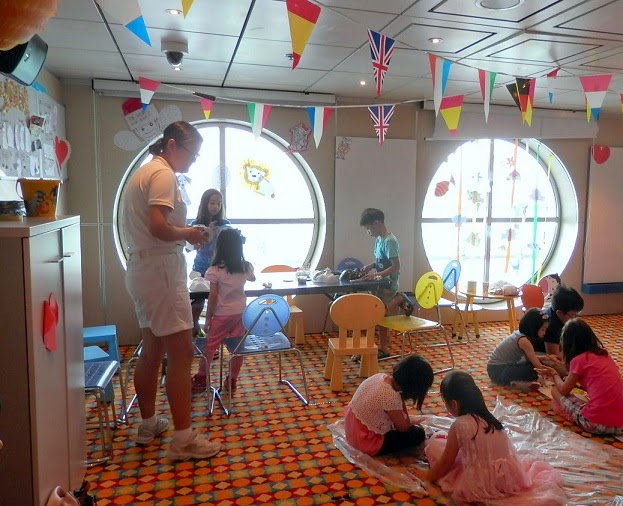 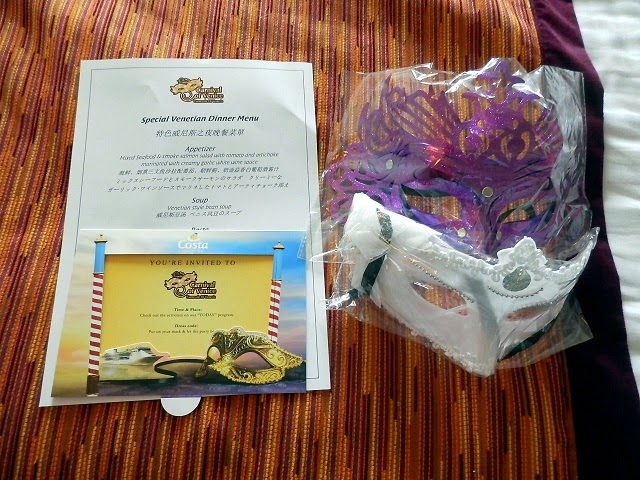 I woke up to find her back and we headed downstairs to check out the Costume Preparation where they made lovely colourful “clothes” using colourful crepe paper. My little girl got hers made in pink, red and blue to match her mask which she decided would be the purple one and I just took her white mask. 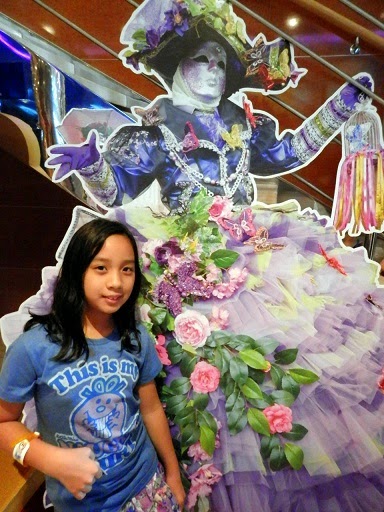 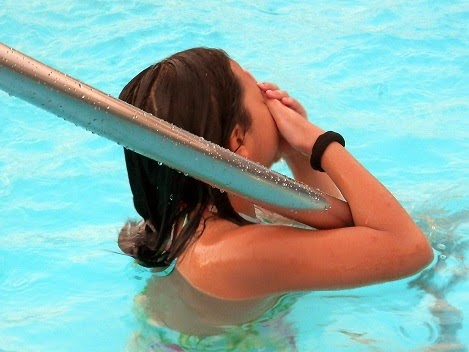 My little girl went for swimming in the pool area

We were invited to a lovely Venetian dinner and party and we even had the Venetian masks delivered to our cabin, but it was a disaster. When we wanted to go for the dinner early they said seating only began at 8pm. 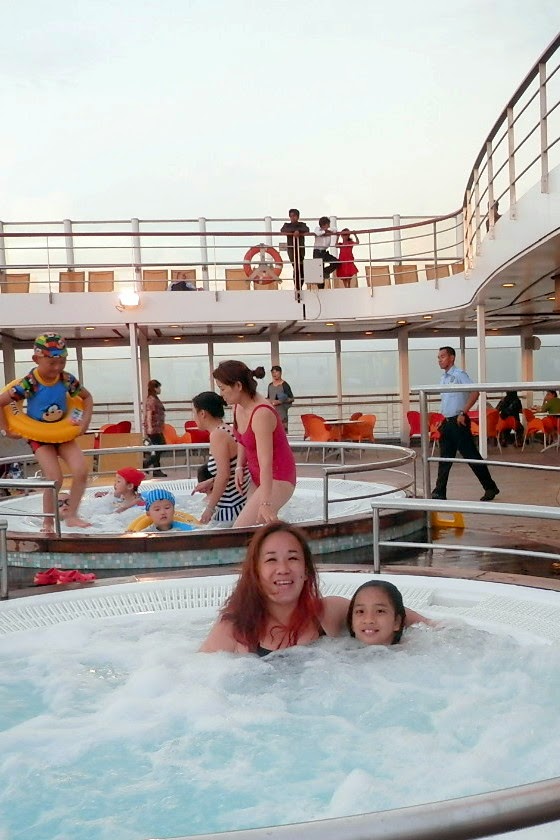 When I went there at 8pm, the queue was way toooooo much, so we went to the Butterfly Deck 12 for a simple dinner instead. Then we went back to the cabin to wait but somehow I fell asleep again… and caused my poor baby girl to miss out on the party…. =( as I woke only at 11pm and found her asleep next to me as well... What a bummer.... huhuhu