A plane carrying the bodies of 20 Malaysian victims of flight MH17, which crashed in Ukraine in July, took off from Amsterdam for Kuala Lumpur on Thursday.

There was no departure ceremony from Schiphol airport, a local news reported.

The plane will land today in KLIA Malaysia, where a national day of mourning has been declared.

The remains will be received with full honor at the KLIA's Bunga Raya Complex in Sepang in a brief ceremony before being handed over to their respective families.This will enable them to be given proper burials and for the families to say their final goodbyes and have some sort of closure.It is also when Malaysians regardless of their ethnic background or faith will come together and observe one minute silence as a mark of respect for the MH17 victims. 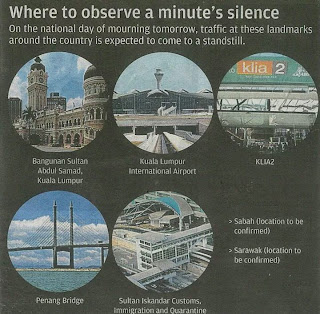 Speaking on the Day of National Mourning tomorrow, the deputy head of the Politics, Security and International Affairs Cluster, Prof Dr Jayum Jawan said that the day goes beyond a mark of respect for the MH17 victims."The day will bring together Malaysians in sharing their grief on the loss of their compatriot regardless of their back ground," he said.

Many Malaysians have vowed to wear black to show solidarity on the national day of mourning today when the first batch of the remains of MH17 victims is brought back to the country.

We Malaysians must stand together in grief as the victims make their final journey. We should  show the families of the victims that they always have our support.

And, while we may never fully know the grief and devastation of having a loved one taken away in a violent and thoughtless act, we will continue to be there for them.
Malaysia should also observe the mourning protocols as set by the government which is:
People are advised to wear dark and sombre coloured clothing which are not too bright or gaudy.
Muslims involved directly in the ceremony of receiving the remains of MH17 victims are encouraged to wear a songkok (without the white band) or black scarf (for women).
On that day, all forms of entertainment programmes on radio and television would be postponed and replaced with recitation of the Quran as well as religious programmes.
The Jalur Gemilang and other flags will be flown at half mast. The public should also refrain from organizing or taking part in any entertainment activities for the day.
Yours truly here hopes everything will go well and there will be no stupid idiots who say stupid things on the internet, because other people are grieving, so we must be respectful and may the families of the first 20 bodies get their closure and RIP/ Al Fatihah to the victims.