Robin Williams, a comic and sitcom star in the 1970s who became an Oscar-winning dramatic actor, died Monday at 63 in Marin County. The Marin County Sheriff's Office said he appears to have committed suicide. "At this time, the Sheriff’s Office Coroner Division suspects the death to be a suicide due to asphyxia, but a comprehensive investigation must be completed before a final determination is made," the Marin County Coroner said in a statement. "A forensic examination is currently scheduled for August 12, 2014 with subsequent toxicology testing to be conducted."

"Robin Williams passed away this morning," the actor's rep Mara Buxbaum added in a statement to ABC News. "He has been battling severe depression of late. This is a tragic and sudden loss. The family respectfully asks for their privacy as they grieve during this very difficult time."

The news of the beloved actor’s death rocked the nation. Channels broke into their usual programming to make the announcement, and within minutes, he dominated online trending topics. Even President Obama noted his passing.

Williams, hailed as a comic genius, was a star of movies and television for more than three decades. But he also suffered from substance abuse problems.

Dubbed “the funniest man alive” by Entertainment Weekly in 1997, Williams brought audiences hours of laughter, putting his imaginative spin on characters in film and television. He was lauded for his serious roles as well, winning a best supporting actor Oscar for his performance as Sean Maguire, the therapist who counsels Matt Damon’s math genius in “Good Will Hunting” (1997), and receiving nominations for “The Fisher King” (1991), “Dead Poets Society” (1989) and “Good Morning, Vietnam” (1987).

Williams was known for being open about his problems with cocaine and alcohol over the years.

The actor spent time on a Hazelden campus in Oregon in 2006. He later explained that drinking had gradually become a problem again after 20 years of sobriety. "You're standing at a precipice and you look down, there's a voice and it's a little quiet voice that goes, 'Jump,'" the "Mrs. Doubtfire" star told ABC News in October of that year. "The same voice that goes, 'Just one.' … And the idea of just one for someone who has no tolerance for it, that's not the possibility."

This summer, he returned to rehab to "fine-tune" his sobriety.

Born in Chicago in 1951, Williams was accepted into John Houseman’s prestigious acting program at Juilliard along with Christopher Reeve, who became a lifelong friend.

Williams came to Hollywood prominence in the late 1970s with his starring role in “Mork & Mindy,” a spin-off of the then-popular “Happy Days.” Williams played an alien baffled by the ways of Earth, the comedy often resulting from the contrast between how he viewed the world and how the world really worked.
Other celebrities turned to the social media site to mourn him. 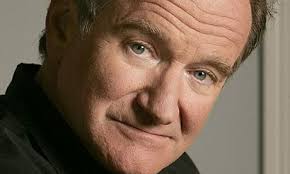 "I could not be more stunned by the loss of Robin Williams, mensch, great talent, acting partner, genuine soul," fellow actor-comedian Steve Martin said on Twitter.

"Robin Williams was like no other," actor and director Henry Winkler said. "To watch him create on the spot was a privilege to behold.. Robin you are an angel now !!! REST IN PEACE"