According to some historians as reported in the Daily Mail, this is the tomb of Vlad III, Prince of Wallachia, aka Vlad the Impaler, aka Dracula. Yes. The Dracula. The tomb is situated in Santa Maria la Nova, in Naples, Italy.


The Estonian scholars cited by the Daily Mail claim that "new evidence" shows that Dracula didn't die in a battle sometime between October 31 and December 31, 1476, as it was previously assumed. Most historians believe that Dracula was then killed on a road between Bucharest and Giurgiu, Romania, during an offensive to reconquer Wallachia from its pro-Ottoman Turk ruler Basarab Laiota. Most Romanian historians believe that Laiota beheaded Dracula, buried the body without ceremony, and sent the head as a trophy to Constantinople. 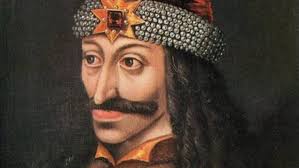 Later theories speculated that the body of the cruel Impaler that was the inspiration for Bram Stoker's vampire novel, was buried near Bucharest, in the island monastery of Snagov, but most scholars think the body is in Comana—a monastery built by Vlad III himself that was demolished about one century later after his death.

But now these researchers cited by the Mail claim this wasn't the case. They believe that Dracula was made prisoner. His daughter Maria—who they say was sent to Naples before all this happened and married to a Neapolitan noble—paid the ransom and Dracula lived his last days in Italy (eating Italian virgins' blood, no doubt.) When he died, they assert, he was buried in this church, which later became the resting place of his daughter and son-in-law.

Self-appointed medieval history scholar Raffaello Glinni believes that the Estonian researchers may be onto something. He claims that the tomb clearly shows the symbols of the House of Drăculești and not those of an Italian nobleman, which is what you would expect here:

When you look at the bas-relief sculptures, the symbolism is obvious. The dragon means Dracula and the two opposing sphinxes represent the city of Thebes, also known as Tepes. In these symbols, the very name of the count Dracula Tepes is written.

For those not into history, Romanian, or vampire lore, Dracula means son of Dracul. Vlad III's father was Vlad II Dracul. Dracul means Dragon, a name his father had attached to his own because he was a member of the Order of the Dragon—" a monarchical chivalric order for selected nobility, founded in 1408 by Sigismund, King of Hungary and later Holy Roman Emperor. It was fashioned after the military orders of the Crusades, requiring its initiates to defend the cross and fight the enemies of Christianity, in particular the Ottoman Turks."